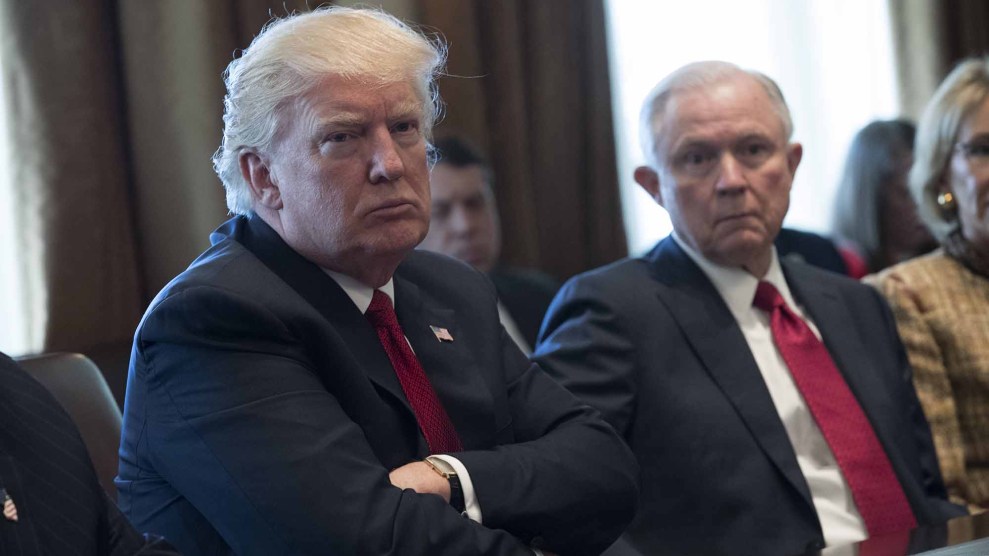 President Trump and then-Attorney General Jeff Sessions at the White House in March 2017 for a listening session on the opioid epidemic. Shawn Thew/CNP via ZUMA

In choosing his next attorney general, President Donald Trump is likely to put one qualification above the rest: loyalty to Trump. For nearly two years, Trump has wailed that Attorney General Jeff Sessions was not protecting him. Now, as special counsel Robert Mueller’s probe moves forward and Democrats in the House of Representatives gain the power to investigate Trump, he will likely select someone he views as a faithful protector of the president.

Sessions, who resigned Wednesday at the president’s request, was by all accounts a loyal Trumpist: a foe of immigration, a tough-on-crime zealot, and a lax enforcer of civil rights laws. He wore MAGA hats and led “lock her up” chants. But Sessions failed to personally defend the president against the Russia investigation. Trump interpreted his decision to recuse himself from the investigation in the first month of his tenure as a sign of disloyalty and has been itching to get rid of him ever since.

The attorney general post was clearly a dream job for Sessions, a former prosecutor and longtime Alabama senator whose extreme positions on immigration and crime were sidelined in the Senate. As attorney general, he could singlehandedly effectuate policies that had fallen out of vogue with his Senate colleagues. But just weeks into his tenure, Sessions set the stage for his own ouster by recusing from the Russia investigation, after it was revealed that he had misled the Senate about his contact with Russian officials during the presidential campaign. Trump frequently expressed his frustration with Sessions’ recusal to aides and the press. On multiple occasions, he came to the brink of firing Sessions. Publicly, he attacked him repeatedly, calling him “beleaguered” and “weak.”

This quote provides a glimpse of what Trump will expect from his next chief law enforcement officer: protection not only from the Russia probe but from Democrats in Congress. It’s a position that would further politicize the Justice Department. And the next attorney general will know that no matter how simpatico he or she is with Trump’s other priorities, a failure to protect the president will mean losing the job.

Long before Trump’s election, it was clear that he prized loyalty above all other things in the people around him. His longtime fixer, Michael Cohen, claimed he would take a bullet for Trump. When Trump became president, he pressed his FBI director, James Comey, on multiple occasions to profess his loyalty. After Comey demurred, he was fired.

The next attorney general’s loyalty will quickly be put to the test. Unlike Sessions, Trump’s next attorney general will take over supervision of Mueller’s investigation into Russian interference in the 2016 election. If Acting Attorney General Matthew Whitaker doesn’t fire Mueller or rein in the investigation, Sessions’ permanent replacement will be expected to wind it down. (Sessions’ final act of loyalty to Trump was that he chose to resign at Trump’s request, rather than be fired, so that Whitaker could take over with authority to oversee the Mueller investigation.)

The next attorney general will also be chosen as Trump faces investigations by Democrats now in control of the House of Representatives. Beginning in January, Democrats are likely to request Trump’s tax returns and launch investigations into his foreign business connections, some of his most controversial acts as president, and the actions of multiple Cabinet officials and federal agencies.

Trump’s loyalty requirement will go beyond protecting him. Trump believes the Justice Department should also be used to go on offense against his opponents. In response to the threat of these House investigations, Trump tweeted Wednesday that “we will likewise be forced to consider investigating them for all of the leaks of Classified Information.” He threatened to use the Senate to investigate Democrats, but the Justice Department would likely also become a weapon. Part of Sessions’ perceived disloyalty was his failure to launch more investigations against Hillary Clinton and other Democrats (though Sessions did push the bounds of his recusal by authorizing some additional inquiries into Clinton and others Democrats).

Trump’s Twitter feed provides ample evidence of the kind of political investigations the president expects from his attorney general.

So many people are asking why isn't the A.G. or Special Council looking at the many Hillary Clinton or Comey crimes. 33,000 e-mails deleted?

Why didn't A.G. Sessions replace Acting FBI Director Andrew McCabe, a Comey friend who was in charge of Clinton investigation but got….

Trump also expects investigations that are detrimental to fellow Republicans to be swept under the rug.

Two long running, Obama era, investigations of two very popular Republican Congressmen were brought to a well publicized charge, just ahead of the Mid-Terms, by the Jeff Sessions Justice Department. Two easy wins now in doubt because there is not enough time. Good job Jeff……

Trump came to office with the view that the Justice Department should be a political arm of the White House. Now, Trump will have the opportunity to bring it closer to his vision.