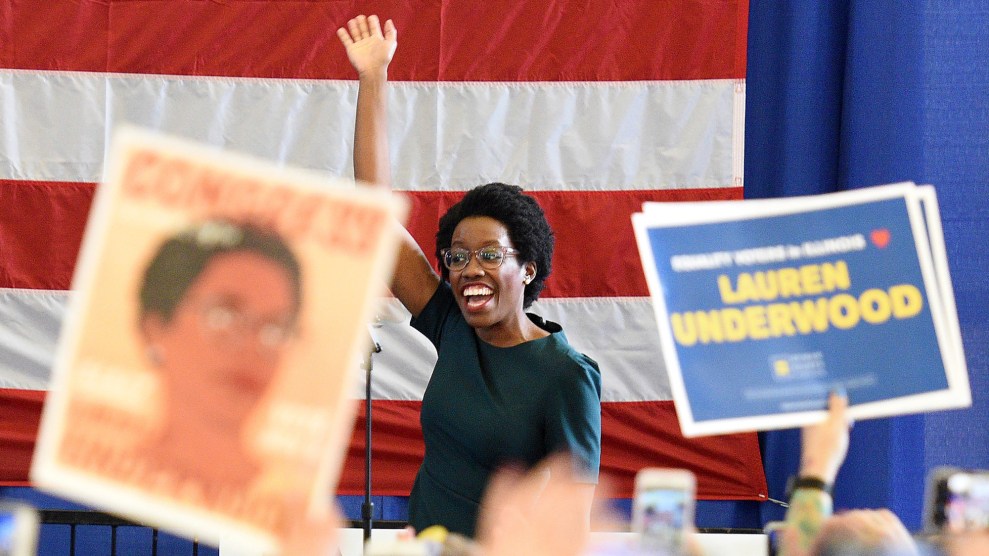 Democratic congressional candidate Lauren Underwood has won the race to represent Illinois’ 14th congressional district, according to projections from several media outlets. She defeated Rep. Randy Hultgren, a four-term GOP incumbent, in a reliably red district. Until recently, Underwood was considered to be a relative long shot.

The registered nurse served in President Barack Obama’s Department of Health and Human Services as a senior adviser charged with implementing the Affordable Care Act. She decided to run for Congress when Hultgren voted to repeal that legislation. If Hultgren and his fellow GOP lawmakers had successfully repealed Obamacare, Underwood—who has a preexisting medical condition—might have been among those without affordable health care coverage.

Underwood’s win underscores the importance that the Obamacare fight played in the midterm elections; she put health care front-and-center in her campaign. But her victory also speaks volumes about the impact of suburban women who sprang into political action after President Trump’s 2016 victory. As I reported earlier this month, decades of Republican dominance had left the Democratic Party all but extinct in Illinois’ 14th district:

The 14th district isn’t exactly fertile soil for launching a career in Democratic politics. A swath of mostly exurbs and farmland that runs from the edges of Cook County up to the Wisconsin border, it has a long history of sending Republicans to Congress. The district is 85 percent white; Underwood is black. But Donald Trump won it by just 4 points in 2016, and the Democratic Congressional Campaign Committee included it on its initial list of targeted seats in January 2017. Experts weren’t convinced: CQ Roll Call described the district as a “super reach” for Dems early this year.

One reason for the skepticism, Underwood soon learned, was that Democratic infrastructure across the district had atrophied. While some towns had a thriving local parties, many others were poorly funded and had few training programs or volunteers. Other women, stunned into political activism following Trump’s victory, noticed this, too. Megan Bartlett, a 31-year-old music teacher from the upper-middle class suburb of Geneva, founded a local Indivisible group after the 2017 Women’s March. When she started asking around about her township’s Democratic Party, she learned there wasn’t one. In Kane County, where Bartlett lives, “the party was nonexistent,” she says, save for the nearby larger cities of Aurora, Elgin, St. Charles, and Batavia. “That’s why some of us stepped up, because [in] certain areas of the county, we did not have a Democratic presence.”

Underwood and her supporters—through training volunteers, organizing canvasses, and recruiting Democratic precinct captains—rebuilt the party’s presence in the district. Tina Willson, one of the area’s recently minted Democratic activists, and other local volunteers told me the increased Democratic visibility seemed to have an impact:

“When we’re knocking on doors, we often get, ‘Wow, I didn’t know there were other Democrats in the area,’ or, ‘Oh, I’m so glad you’re here because I thought I was the only one,’” Willson says. Jody Kanikula, a licensed clinical social worker and first-time Democratic candidate running for Kane County Board, brought her neighbor, a senior who typically votes Republican, to one of Underwood’s recent fundraisers; her guest found the Democrat’s message on Medicare compelling. Nancy Glissman, a self-described independent voter from Huntley, who’s volunteered with Underwood since her March primary, says she’s seen support for Underwood among her Republican and independent neighbors in her over-55 community, as well.