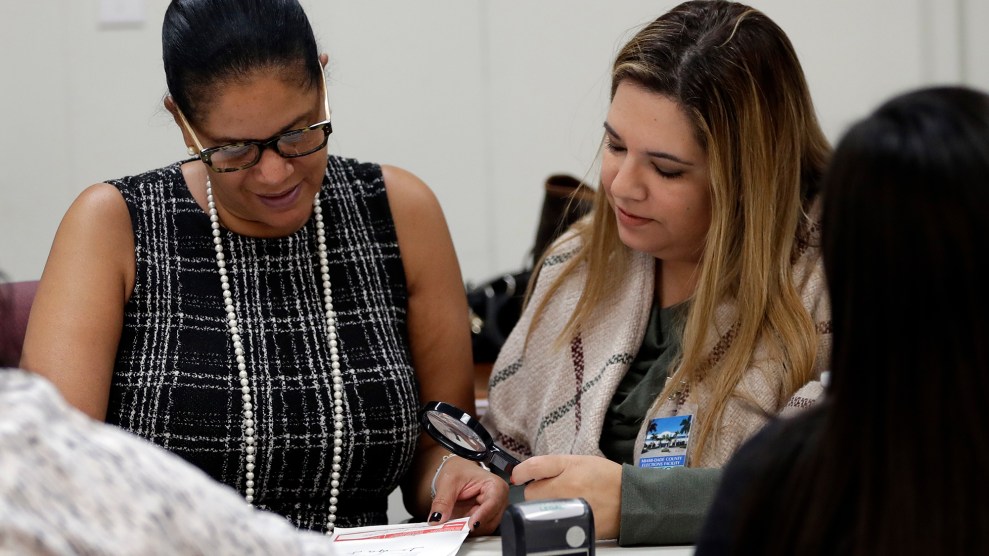 When Patricia Fisher sees news stories about Florida election workers comparing the signatures on mail-in ballots with signatures in the state registration database, she can hardly believe her eyes. “I’ve been horrified,” she says. “I turn on my TV and it’s, ‘What are they doing!?’ It’s awful.”

Fisher, a professional documents examiner from Northern California, has spent more than four decades verifying disputed signatures, and if there’s one core principle in her world, it is this: You can’t just compare a single signature with another to determine a “mismatch.” And you really, really cannot determine a mismatch by comparing a recent signature with one collected years earlier.

There are lots of reasons for this, document experts say, from natural variations in people’s script to health issues, aging, injuries, changes in mental state, and the circumstances in which a signature was created—a touch pad at the DMV, say, will yield a very different signature than a ballpoint pen at a desk. “You have to have a series of signatures,” Fisher says. “They need to be closer in time, and on similar types of documents, because one signature is not going to represent the full range of variations in someone’s handwriting.”

“To do any kind of meaningful examination, I like to get anywhere from 6 to 10 representative samples.”

Signatures have been in the news recently thanks to bitterly contested midterms races in Florida and also in Georgia, where elections officials rejected large numbers of voter registrations and then tossed aside mail-in ballots whose signatures, according to elections workers, did not match the signatures on file with the registrar. It wasn’t until a lawsuit was filed that a federal judge, less than two weeks before Election Day, ordered state and local officials to stop discounting those absentee votes.

Mark Songer, a former forensic documents examiner for the FBI, agrees. “To do any kind of meaningful examination, I like to get anywhere from 6 to 10 representative samples that are pretty contemporaneous with the signature itself,” says Songer, who now plies his trade in Colorado. “A person could write their signature 100 different times and none of those will be exactly alike, because we all have a range—the only way to establish that range is to have a sufficient number of samples.”

Fisher specializes in probate, trust, and financial elder-abuse cases. If she were an elections official comparing signatures and saw telltale characteristics of an elder’s deteriorating writing, “then I would ask the question, ‘How old is this person?’ If I saw they were 90 years old, I’d say, ‘Now there’s a logical explanation for why there are so many differences.'”

Signature problems have continued to plague Florida, one of 36 states—according to Gerry Langeler, research and communications director for the nonprofit National Vote at Home Institute—that have enacted signature-match laws. On Thursday, a federal judge ruled that more than 4,000 Florida voters whose ballots were disqualified due to mismatches had until 5 p.m. Saturday to correct the problems. Neither Florida nor Georgia requires special training for the officials who make signature determinations.

Disputes over ballot signatures have grown increasingly prevalent as more people vote by mail. In addition, technological changes, including the ubiquity of touch-pad signatures, and the fact that cursive writing is no longer taught in many schools, have made signatures less reliable for a quick verification of a person’s identity.

“If they use a driver’s license signature and you’re signing an electronic pad, that changes many of the characteristics, because it’s not natural,” Fisher says. “So you’re comparing apples and oranges for such an important thing—to say, ‘No, your vote doesn’t count because your signature doesn’t look right.'”

“The whole signature thing needs to be totally reevaluated,” she adds. “There should not be all these untrained people—and you probably won’t get trained people there, because trained persons know you don’t compare one signature to another signature.”

Some states have taken positive steps. After Colorado experienced election-related signature snafus in 2016, state officials brought in third-party signature verification software that can spot the kinds of characteristics experts look for in a person’s writing and render a better verdict than an untrained worker might. If the software cannot make a match determination, the disputed ballot is examined by a bipartisan pair of “election judges” who have received at least a few hours of expert training in signature verification. (Both must agree in order for a ballot to be disqualified.)

Songer has conducted such trainings. “Does it make them a handwriting expert? No it doesn’t. But it gives them the fundamentals. And because it’s computerized, they are actually looking at other signatures from past ballots, drivers licenses, those types of things. When you pull up the voter’s name, it comes up with sometimes two to three signatures, which is a lot better than just the one. So they are able to make better judgments. It’s been very successful here.”

This solution isn’t cheap, though. The software alone cost Colorado $550,000 over five years, and “not many states do it,” Songer says.

As for what’s been happening in Florida, “It’s definitely concerning, man,” he says. “There’s got to be a better process. And that process is is going to depend on what each jurisdiction is willing to put into it.”