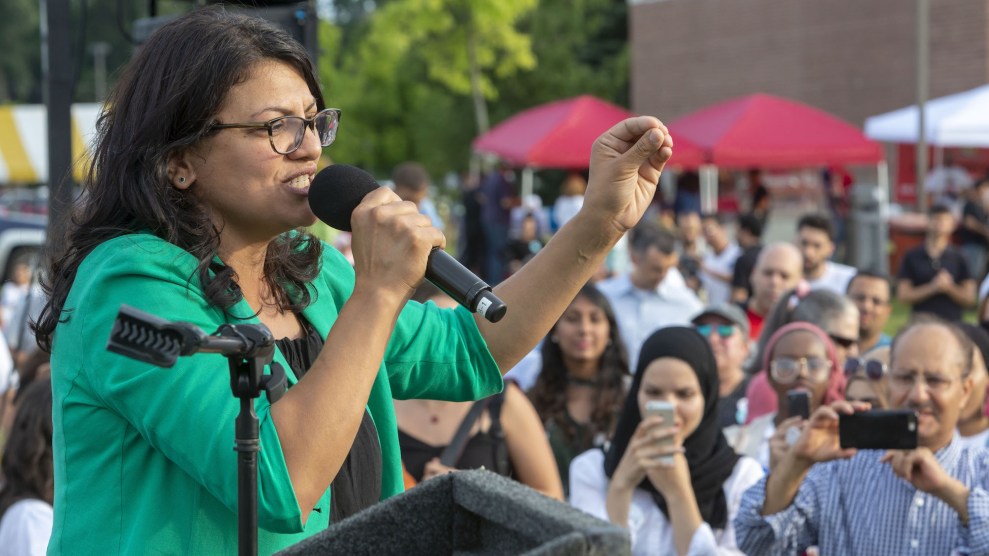 Rashida Tlaib speaks at a Muslim Get Out the Vote rally in Dearborn, Michigan, on July 29, 2018.Jim West/ZUMA

Rashida Tlaib was nearly breathless. It was 1:30 on Tuesday afternoon, and the newly elected congresswoman told me that she’d been racing from one meeting to the next since she arrived in Washington for the weeklong new member orientation.

But before 8:00 am this morning, the incoming representative from Detroit had still found time to give a pep talk to the Sunrise Movement, a group of youth activists who would soon storm the office of Democratic leader Nancy Pelosi to demand that the party use its new House majority to address climate change. The night before, Tlaib and Representative-elect Alexandria Ocasio-Cortez (N.Y.)—who made headlines today by joining the protesters at Pelosi’s office—had stopped by St. Stephen’s church to meet with the activists on the eve of the demonstration.

“For me, those young people I saw at that church, that was me 15 years ago,” Tlaib said in a phone interview. “I was fighting back against corporate greed and this constant disregard for public health. I wanted to come and help.”

“We need to stand up to these Koch Brother assholes.” Hell yes we do. That’s why we need to elect more candidates — like @Ocasio2018 and @RashidaTlaib — who take the #NoFossilFuelMoney pledge and commit to #GreenJobsForAll pic.twitter.com/4K7Y0YBhy6

The move is unusual for newly elected members of Congress, but not so for Tlaib and Ocasio-Cortez, both of whom arrived in electoral politics through activism and community organizing and identify themselves as democratic socialists. And while Congress affords them a bigger platform to advance their progressive policy agenda, their decision to join with the protesters during their first days in Washington makes clear that they have no intention of abandoning the strategies and principles that paved their way to Capitol Hill.

Climate change has been a key issue for both Tlaib and Ocasio-Cortez. As a Michigan state legislator, Tlaib fought to reduce air and water pollution in Detroit and put environmental justice at the center of her campaign. Ocasio-Cortez, meanwhile, has proposed a new congressional committee to develop a plan to transition the US economy away from fossil fuels, reduce the concentration of greenhouse gases in the atmosphere, and “promote economic and environmental justice and equality.”

Tlaib views her work with groups like the Sunrise Movement as a natural extension of the campaigns she and her fellow progressive built. “I don’t have to stop being an activist because I’m a member of Congress,” she says. “That movement work is critical to moving the needle.”

Indeed, Tuesday’s protests appear to have already had some success. Pelosi, who is courting support for her bid to be House speaker, issued a statement reaffirming her support for reinstating a select committee to address climate change, a new iteration of a House committee that met from 2007 to 2010 but was eliminated when Republicans took control of the House. That promise falls short of what Ocasio-Cortez, Tlaib, and the Sunrise Movement protesters seek—namely, the creation of a so-called “Green New Deal”—but the attention has started a conversation between the new members and their party’s longtime leader.

How far these freshmen progressives can push their fellow Democrats remains uncertain. The Congressional Progressive Caucus—a coalition of liberal lawmakers that Tlaib and Ocasio-Cortez have joined—will have a record 90 members in the new Congress.