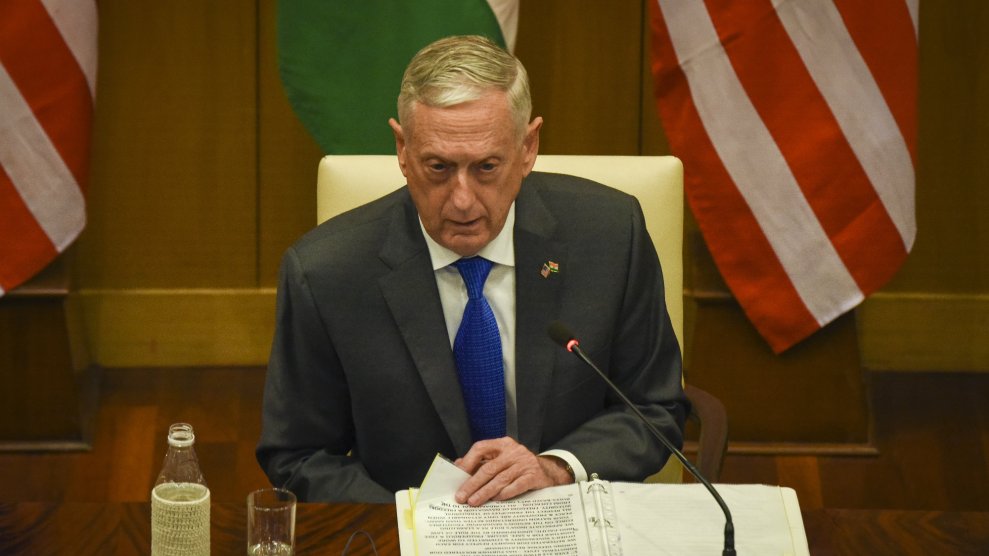 In response to a caravan of “roughly 3,000 to 4,000” migrants, the United States military is preparing to send as many as 15,000 troops to guard the US-Mexican border. As my colleague Noah Lanard pointed out, that figure is “more than the entire US military presence in Afghanistan.”

The large number of soldiers at the border, who, by law, are prevented from enforcing immigration laws, has led to criticism that this huge expense of time, resources, and money is just an election ploy by President Donald Trump to gin up anti-immigrant sentiment before next Tuesday’s midterm elections.

In response, Secretary of Defense James Mattis told reporters Thursday, “We don’t do stunts in this department.”

The Washington Post decided to fact check this claim and assembled a list of some of times when the Department of Defense opted for more showmanship than serious military activities.

Pentagon reporters have for months criticized limited access to Mattis and other top officials, who, on the occasional chance they are made available, have been sometimes instructed to only answer narrow questions in an effort to avoid contentious issues.

Enter Gerard Butler. In promotion of his Navy-endorsed submarine film “Hunter Killer,” the actor was invited to helm a Pentagon news conference Oct. 15.

That means he has held more news conferences recently than White, who has not held a briefing since May.

During the George W. Bush administration, the Pentagon had to cope with the Army’s deceptive handling of NFL player-turned-serviceman Pat Tillman’s death by friendly fire.

His family later accused the military of warping Tillman’s life and death. His brother, fellow Ranger Kevin Tillman, testified in 2007 that the military told “deliberate and calculated lies” to transform the fratricide into an “inspirational message.”

Tillman himself feared his potential death would be used in such a way by government officials, his biographer Jon Krakauer told The Post in September. Krakauer said Tillman’s death was also used to distract from incidents like the Abu Ghraib prison abuse scandal and an insurgency spinning out of control in Iraq.

In 2007, the Pentagon’s independent watchdog agency said the Army was at fault for how it reported Tillman’s death. “Our failure in fulfilling this duty brought discredit to the Army and compounded the grief suffered by the Tillman family,” the Army’s acting secretary, Peter Geren, said at the time.

The Obama administration also engaged in what Mattis might consider “stunts.” During his time in office, the Pentagon spent millions on “giant flags, welcome home moments and somber tributes” without an apparent benefit:

Those flyovers, gigantic U.S. flags, welcome home ceremonies and stirring military tributes at events like NFL games cost taxpayers more than $50 million from 2012 to 2015, and the Pentagon has struggled to show how effective they are, a Senate report concluded in 2015.