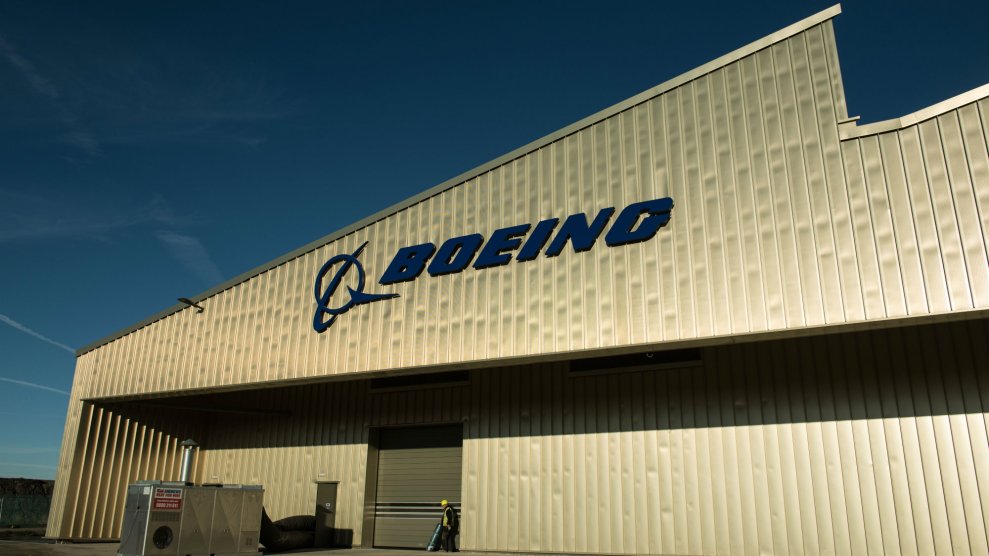 The revolving door between high-ranking Pentagon employees and the defense contractors receiving billions in government funding is more alive than ever, according to a report released last week by the Project on Government Oversight, a nonpartisan watchdog group. But since federal law permits the Department of Defense and contractors to avoid disclosing precise numbers, the report captured only a small slice of how many DoD officials have gotten jobs with contractors recently.

Congress mandated in 2008 that DoD maintain a database with information about employees who end up working for Pentagon contractors, but POGO says the existing database is not fully public, despite lobbying from outside advocacy groups. (The group Citizens for Responsibility and Ethics in Washington sued the Pentagon and acquired an earlier, redacted version of the database in 2013.)

The last major report on the extent of the revolving door problem, a 2008 Government Accountability Office study, identified 2,435 ex-Pentagon officials who were working for 52 contractors. The POGO report conservatively estimates that at least 380 high-ranking Pentagon employees—which includes senior political appointees, military officers, and civilian DoD officials—took jobs with contractors over the past decade.

“I am confident that we are undercounting when we say 380 people,” Mandy Smithberger, who directs POGO’s Straus Military Reform Project, told reporters at a press conference Wednesday.

In lieu of government-issued data, the Project on Government Oversight filed records requests and scoured publicly available sources like LinkedIn profiles. They found that 25 percent of those 380 ex-officials went on to work at either Lockheed Martin, Boeing, Raytheon, General Dynamics, or Northrop Grumman. During the 2017 fiscal year, Lockheed received $50.696 billion in total government contracts, the most of any single company. Boeing received the second-most at $23.36 billion.

The revolving door problem is not limited in one direction. Smithberger’s report also drew attention to private-sector employees in the defense industry who leave to work in government. Before assuming the No. 1 role at the Pentagon, Defense Sec. James Mattis served on the boards of General Dynamics and Theranos, the disgraced blood-testing company. He also advised the United Arab Emirates and consulted for Northrop Grumman. Mattis’s deputy, Patrick Shanahan, was confirmed in July 2017 despite having zero experience in government. For more than three decades, he worked at Boeing, eventually rising to become senior vice president of supply chain and operations.

Defense contractors attributed the report’s findings to their commitment to hiring veterans. “We pride ourselves in hiring those who have served,” General Dynamics spokesman Jeff Davis told the Washington Post. Dan Curran, a Boeing spokesperson, added that the company “is proud that our workforce includes more than 20,000 veterans and that we have given millions of dollars to help train service members and support their families as they transition into civilian life.”

Since President Dwight D. Eisenhower warned against the “unwarranted influence” sought by the military-industrial complex in 1961, lawmakers from sides of the aisle have denounced the revolving door and benefited from it in equal measure. Until 1976, government contractors were prevented from making political contributions, but in recent years the floodgates have opened. This past election cycle the defense industry spent more than $26 million, with 58 percent of that money in support of Republicans.

In December 2016, Donald Trump told supporters at a rally in Baton Rouge, “I think anybody that gives out these big contracts should never ever, during their lifetime, be allowed to work for a defense company.” Shortly after taking office, he issued an executive order barring political appointees from lobbying their former agencies for at least five years. But several ex-officials have managed to skirt this mandate, benefiting from what Smithberger characterized in her report as a “tangled mess” of federal ethics laws. One popular workaround for contractors is hiring government employees to go into “business development.” These hires appear “at the very least, to violate the spirit of the law,” the POGO report found. “In business development and strategic roles, those officials may also be able to use non-public proprietary information to give their new employers a competitive edge.”

Ethics requirements and Pentagon bylaws can also fail to safeguard against senior officials intervening to help contractors they later end up joining. One prominent example cited in the report involved former Marine Corps General James E. “Hoss” Cartwright, who as the nation’s second-highest-ranking military officer rescued a much-criticized missile defense program known as JLENS. After leaving government, Cartwright became a board member at Raytheon, one of the program’s primary contractors, and ended up receiving $1.4 million in compensation, according to the report. (He later pleaded guilty in a federal leak investigation and was pardoned by Barack Obama during his final week in office.)

The influence of ex-Pentagon officials on their former colleagues in government “often confuses what is in the best financial interests of defense contractors—excessively large Pentagon budgets, endless wars, and overpriced weapon systems—with what is in the best interest of military effectiveness and protecting citizens,” the report concluded.