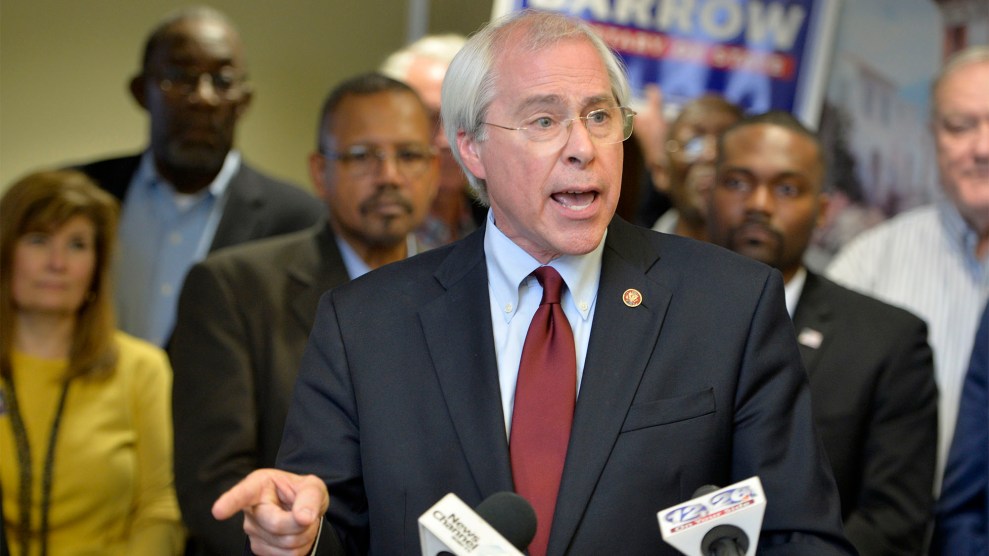 John Barrow is the only former member of Congress with the unfortunate distinction of being drawn out of his district not once, but twice. In 2004, after he was elected to the House, Georgia Republicans redrew the state’s political districts and removed Barrow’s liberal hometown of Athens, home to the University of Georgia, to make his district more GOP-friendly. Barrow moved to Savannah and narrowly survived reelection.

Republicans redrew the state’s maps again after the 2010 election and once again targeted Barrow, removing 41,000 black voters in Savannah from his district, along with his new residence. Barrow was forced to move to staunchly conservative Augusta, best known as the home of the Masters golf tournament, and finally lost reelection in 2014. By that time, he was the last white Democrat from the Deep South in the House.

Barrow, 63, calls himself “the most gerrymandered member of Congress in history.” His personal experience dealing with attempts to manipulate state voting laws led him to run this year for Georgia secretary of state, in a bid to become the state’s top election official. He trailed on Election Day by just 19,000 votes to Republican state Rep. Brad Raffensperger, but because neither candidate won an outright majority, a runoff election on Tuesday will decide the race—and the fate of Georgia’s suppressive voting practices.

“For many years, most folks haven’t put much thought into the office of Secretary of State,” Barrow wrote in the Atlanta Journal-Constitution after the election’s first round. “But on November 6th, all of us received a civics lesson on the importance of this office.”

He was referring to the controversial actions of Georgia’s previous secretary of state, Brian Kemp, who instituted a series of policies that made it harder to vote while overseeing his own election for governor against Democrat Stacey Abrams, which he won by a slim margin. (Two days after the election, amid charges of conflicts of interest, Kemp declared victory—although the race had yet to be called—and stepped down as secretary of state.) That included purging more than 2.2 million people from the voting rolls from 2012 to 2018, putting 53,000 voter registration applications on hold, and advising counties on how to close 214 polling places since the 2012 presidential election. These efforts disproportionately hurt voters of color, and Abrams said that allowed Kemp to “tilt the playing field in his favor.”

Barrow, 63, calls himself “the most gerrymandered member of Congress in history.” He has vowed to reverse Kemp’s voting restrictions.

Barrow has vowed to reverse Kemp’s voting restrictions. He called Kemp’s voter purging “plainly illegal” and wrote in the AJC, “Any thing we do that makes it harder than necessary for honest citizens to register, stay registered, or vote undermines their right to vote.” He wants to get rid of Georgia’s electronic voting machines, which are vulnerable to election hacking, and replace them with paper ballots. His other immediate priority is to implement automatic voter registration to make it easier for voters to register and stay on the rolls.

In contrast, Raffensperger, an engineer and state representative since 2015, has been endorsed by President Donald Trump and supports Kemp’s restrictive policies. He says Barrow’s election would lead to “more illegal voting than ever,” even though there’s scant evidence of noncitizens voting in US elections. He called Kemp “a man of high integrity,” said he shouldn’t have resigned as secretary of state while running for governor, and dismissed the allegations of voter suppression as “unfounded and unfair.” Despite rampant problems on Election Day, which included three-hour lines in metro Atlanta and a dramatic increase in contested provisional ballots, Raffensperger said there were “actually very few precincts” with voting problems.

The difficulties that many Georgians encountered at the polls in the governor’s race underscored the importance of the secretary of state’s office. Yet the Barrow-Raffensperger race, despite its sharp clash of ideologies over how to enforce the state’s voting laws, has received a fraction of the attention of the governor’s race. As of Friday, voter turnout was down 56 percent during early voting compared with the November election, with a much whiter and older electorate, according to voter data maintained by the secretary of state’s office. Raffensperger, evidently confident in his position, skipped a recent TV debate, forcing Barrow to debate an empty chair.

Abrams has endorsed Barrow, releasing a mailer and radio ad for his campaign. “John Barrow’s first priority is stopping voter suppression in Georgia,” she says in the ad. “I know John Barrow and I trust him.”

Yet Abrams’ coalition, particularly black voters, has yet to turn out in large numbers for Barrow based on the early voting data. It’s been difficult for Democrats to mobilize black voters following Abrams’ razor-thin loss, especially given how many problems they faced at the polls, says LaTosha Brown, co-founder of Black Voters Matter, a get-out-the-vote organization that mobilized black voters for Abrams. African Americans make up 30 percent of Georgia’s electorate, and they turned out in big numbers to push Abrams to the brink of the governorship in a red state. But without an inspiring black candidate atop the ballot, everyone expects a decline in black turnout in the runoff, which could make it difficult if not impossible for Barrow to come out on top.

“Stacey’s loss was a really big loss for our community, not just that she lost but how she lost,” Brown says. “I don’t know a single black person in Georgia that doesn’t believe that race was stolen. That’s a lot of wind out of the air.”

Electing Barrow would be one of the most tangible ways black voters could counteract voter suppression in the state in future elections. “Voting problems were front and center in the governor’s race,” says Tharon Johnson, an Atlanta-based Democratic strategist who was Southern regional director for Barack Obama’s 2012 campaign. “If voters want to address these issues, the best way is to go out and elect John Barrow as secretary of state.”

But Barrow’s background as an elderly, self-described “flaming moderate” Blue Dog Democrat who voted against the Affordable Care Act while in Congress and touted endorsements from the NRA hasn’t won him the same kind of support among black voters that Abrams enjoyed. (“Yeah, I’m a Democrat, but I won’t bite ya,” he said in one memorable secretary-of-state ad.) “He’s certainly the best candidate, but he doesn’t have the same appeal to black voters as Stacey Abrams,” Brown says.

Black turnout started low in the runoff but picked up toward the end of early voting, giving Barrow supporters some hope. But in order to win, Barrow will need a huge turnout from voters of color on Election Day, while also peeling off enough moderate white voters from Raffensperger.

Democrats flipped secretary-of-state offices in Arizona, Colorado, and Michigan in 2018. These victories will help reshape voting laws in key swing states. But given the voter suppression we saw in Georgia in 2018—and with Kemp now governor—a victory for Barrow would be the most significant of the bunch.