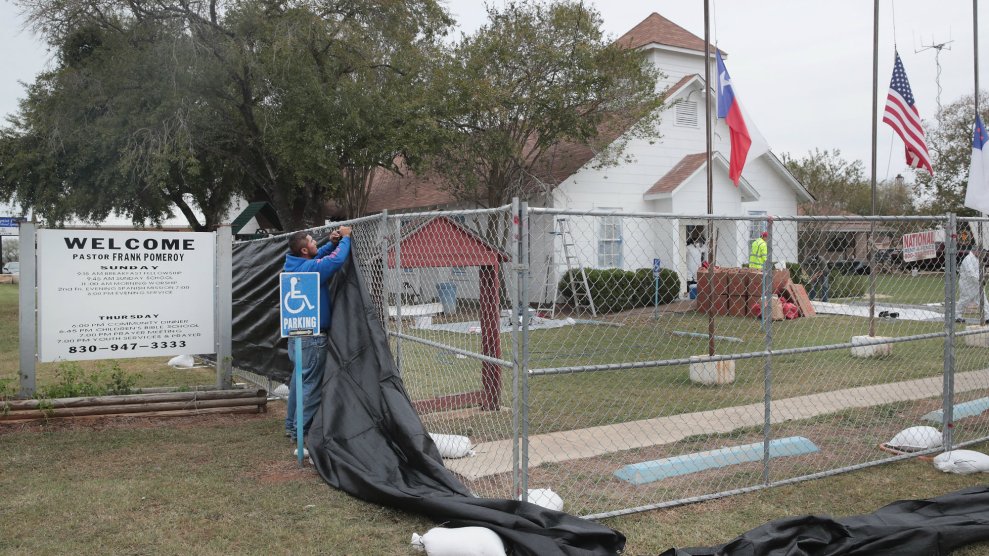 A tarp is wrapped around the First Baptist Church of Sutherland Springs as law enforcement officials wrap up their investigation into the shooting there last year that left 26 people dead. Scott Olson/Getty Images

A report made public this week by the Pentagon’s internal watchdog found that the Air Force neglected to prevent Devin Kelley, a veteran with a domestic violence conviction, from acquiring a firearm several times before he killed 26 people in a Texas church last November.

In November 2012, Kelley pleaded guilty in a military court-marital to assaulting his wife and toddler stepson. He was given a sentence of no more than three years in confinement at an Air Force base in New Mexico. That conviction should have prevented Kelley from purchasing a variant of the AR-15, a military-style semi-automatic weapon, that he used in the shooting. But because the Air Force failed to submit his fingerprints to the FBI—as Defense Department policy requires—Kelley did not appear in a background-check database. After he was released, he was able to legally buy that weapon at a store in San Antonio, Texas, in addition to three other firearms from other licensed dealers.

“Because his fingerprints were not submitted to the FBI,” the report states, “Kelley was able to purchase firearms, which he used to kill 26 people.”

Ann Stefanek, chief of Air Force media operations, said in a statement provided to Mother Jones that the Air Force was “committed to ensuring full compliance with criminal history reporting guidelines” and had launched several audits and internal probes into the matter.

“Immediately following the tragedy at Sutherland Springs last year, the Air Force determined that the criminal record of former Airman who killed 26 people should have been reported to the FBI and wasn’t,” she said. Stefanek went on to say an Air Force review completed a month after the shooting identified 21 areas of improvement to the service’s criminal history reporting practices. Since that time, twenty of the 21 recommendations “have already been completed” and the remaining one will be completed in July.

In addition to Stefanek’s statement, the Air Force issued a six-page, single-spaced “corrective actions summary report” detailing the department’s response over the past year. Among the conclusions highlighted in this document was the systemic nature of reporting flaws across the military. “The failure in reporting Kelley’s criminal history was not an isolated event unique to this case or to Holloman Air Force Base where the investigation unfolded,” notes the document, which was unattributed. “Lack of compliance with reporting requirements across the Air Force and the other Services was highlighted in multiple Department of Defense Inspector General audits that took place prior to the tragic shooting in Texas.”

The inspector general’s office, which is independent from the Air Force and other branches of the military, launched an examination of the event days after the shooting by request of the Air Force’s top civilian and military officers. The resulting 131-page report was released publicly on Thursday.

In response to the Air Force’s missteps, Congress introduced bipartisan legislation that penalizes government agencies for not reporting relevant criminal records to the national background check system that firearms dealers use to determine whether an individual can purchase a gun. President Trump signed that measure into law in March.

“Had existing law been enforced, the horrific tragedies in Sutherland Springs and Parkland would have never occurred,” said co-sponsor Rep. John Culberson (R-TX). “Fixing the background check system will ensure that guns stay out of the hands of people who have broken the law and already forfeited their right to own a gun.”