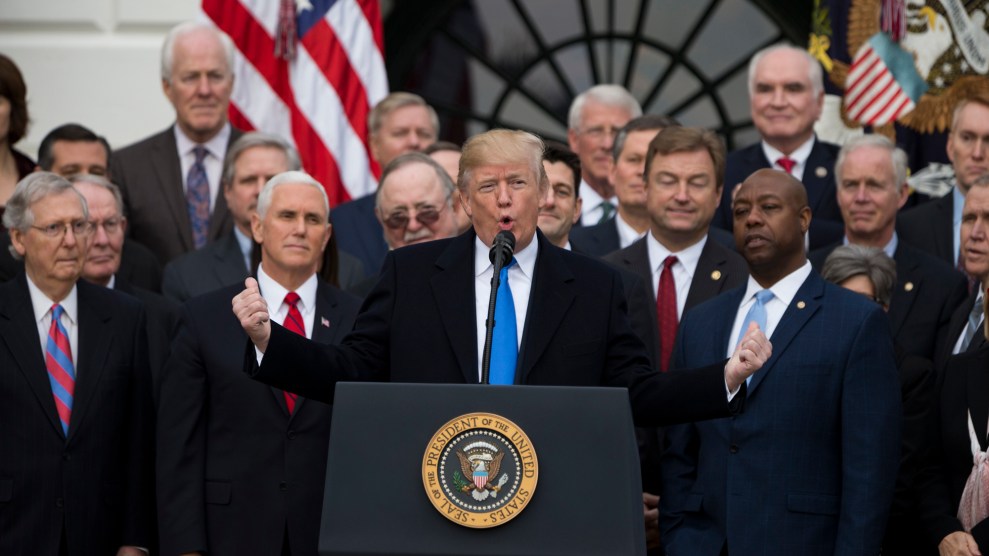 On December 20 last year, more than 150 House and Senate Republicans gathered in the Rose Garden of the White House to celebrate the party’s most significant legislative accomplishment in more than a decade—the passage of a comprehensive overhaul of the tax code. The bill, in effect a massive transfer of wealth to the richest Americans, passed along mostly party lines. All but 12 House Republicans voted for the measure; every Democrat voted against it.

At the ceremony and in the days leading up to it, President Donald Trump and Republican leaders sounded a triumphant note. The Republican Party has long used the promise of lower taxes to entice voters and the prospect of higher taxes to scare them. “If we can’t sell this to the American people,” Senate Majority Leader Mitch McConnell (R-Ky.) said during the floor debate over the law, “we ought to go into another line of work.”

Republicans failed to sell the law over the next 11 months, and in November, more than two dozen members of Congress who voted for the law were fired. If you wanted to pinpoint the exact moment Republicans lost the House, you could do a lot worse than that ceremony—not just because it was an unpopular law that laid bare the most cynical priorities of the ruling party, but because this was the closest thing they thought they had to a life preserver.

“If we can’t sell this to the American people, we ought to go into another line of work.”

Start with the unpopular part. One of the most controversial aspects of the law was a cap on the annual deduction for state and local taxes. This wasn’t a big deal in places like Texas or Florida that don’t have a state income tax, but it meant that a landmark “tax cut” was actually a significant tax hike for many residents of California, New York, and New Jersey—incidentally three states that are, or were, home to a substantial number of endangered Republican members of Congress. Some of those Republicans, like John Faso and Dan Donovan of New York, voted against passage, but whether they supported it on an individual basis was almost besides the point; the law was the handiwork of the Congress they’d empowered. On Election Day, Democrats netted 14 seats in those three states alone—seven in California, three in New York, and four in New Jersey. They only needed 23 to win back the House.

There was a lot more to the Democratic wave than an unpopular tax law, but the bill touched a lot of other things. The new law blew up the budget deficit, undermining the entire political identity of incumbents, such as Virginia Rep. Dave Brat, who had cast themselves as responsible checkbook-balancers. (His opponent, congresswoman-elect Abigail Spanberger, delivered one of the most memorable lines of the cycle on exactly this subject.) Democrats’ most consistent point of emphasis in 2018 was health care, and it likely would have been regardless of whether tax reform passed. But the law that eventually passed was a health care law too—the tax bill repealed the Affordable Care Act’s individual mandate.

In covering the 2018 campaign, I found it was Democrats, not Republicans, who were eager to talk about the new law. That was in tune with pre-election surveys (and the Republican Party’s own polling), which found that voters saw it for what it was—a gift to corporations and the rich above all else. Besides, tax reform wasn’t a hypothetical anymore; voters could decide for themselves whether this new law was a godsend. It’s one thing to promise voters that the future passage of tax reform will change their lives, but it’s another to convince them that it already has when it hasn’t. Paul Ryan’s boast that the law inflated a Pennsylvania public school secretary’s paycheck by $1.50 ought to be the 115th Congress’ epitaph.

Eventually Republicans stopped even trying to sell the law, opting instead to talk about kitchen-table issues like MS-13 and antifa. What else did they have to turn to? They never passed an infrastructure bill, they didn’t build the wall, and they gutted parts of the health care law without replacing it with anything. You just don’t get many signature accomplishments. If you can’t sell the one you have, well, you go into another line of work.