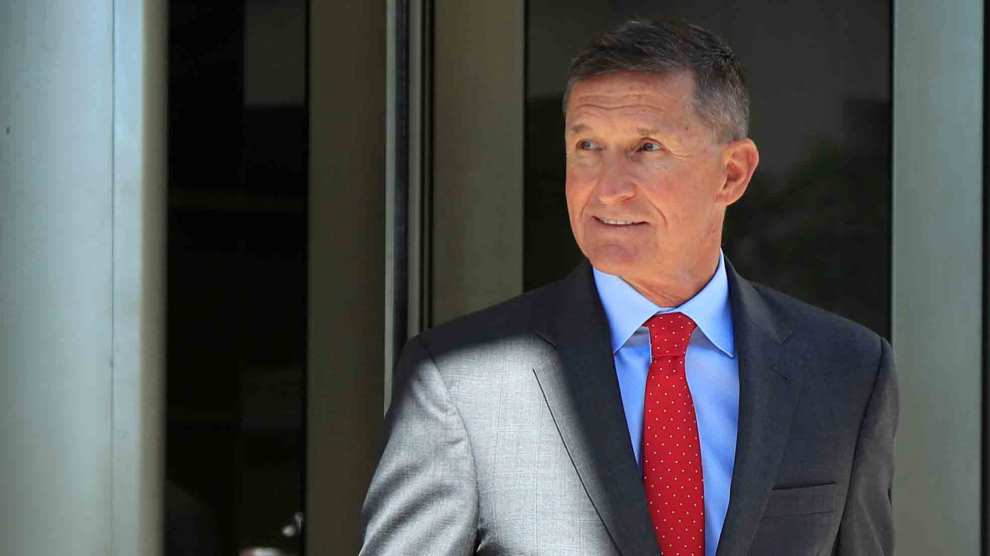 In early December, special counsel Robert Mueller, in preparation for the upcoming sentencing of Michael Flynn, submitted two memos outlining his recommended punishment for President Donald Trump’s former national security adviser. The documents noted that Flynn, who pleaded guilty to lying to the FBI, deserved no prison time for his felony because he had provided “substantial assistance” to Mueller’s investigation and several other ongoing criminal probes. And one of the memos tantalizingly noted that Flynn had aided Mueller’s “investigation concerning any links or coordination between the Russian government and individuals associated with the campaign of President Donald J Trump.” The memo does not specify what information Flynn provided on this topic, but perhaps he told Mueller about the Russian contacts of a key Trump campaign official: himself.

In February 2017, the Washington Post reported that Flynn had “a series of contacts” with Russia’s then-ambassador to the United States, Sergey Kislyak, in 2016 that “began before the Nov. 8 election and continued during the transition.” Kislyak confirmed to the Post that he had communicated with Flynn by text, phone, and in person. But that article—and much of the Flynn coverage—focused on Flynn’s post-election contacts with Kislyak, conversations that he lied about to the FBI and that led to his indictment. There has been no public information, via the Mueller investigation or other sources, regarding Flynn’s interactions with Kislyak during the 2016 campaign when he was Trump’s top adviser on national security matters.

Yet two Flynn associates tell Mother Jones that Flynn has informed friends and colleagues that prior to Election Day he spoke with Kislyak about how Trump could work productively with Russia if he won the presidency.

One of these Flynn associates, who each asked not to be identified, notes that Flynn said he discussed with Kislyak a grand bargain in which Moscow would cooperate with the Trump administration to resolve the Syrian conflict and Washington would end or ease up on the sanctions imposed on Russia for its annexation of Crimea and military intervention in Ukraine. The other Flynn associate says Flynn said he had been talking to Kislyak about Syria, Iran, and other foreign policy matters that Russia and the United States could tackle together were Trump to be elected. A third Flynn associate recalls that shortly after the election, Flynn told him he had been in contact with Kislyak about Syria—but without stating whether that was before or after Election Day.

The nature and the timing of Flynn’s pre-election communications with Kislyak could be a significant element of the Trump-Russia story.

Throughout the 2016 campaign, Trump and his campaign surrogates continuously denied Russia was behind the hacks of Democratic targets and the public dissemination of the stolen material. Their statements echoed Moscow’s false claims that it had nothing to do with these attacks on the US presidential campaign. Trump and his team continued to bolster this Russian disinformation campaign by insisting there was no evidence of Kremlin culpability, even after Trump and Flynn received a secret intelligence briefing in mid-August 2016 that noted the intelligence community had reached the preliminary conclusion that Moscow was orchestrating this assault—and after the Obama administration, in early October 2016, publicly declared that Russia was responsible for these hacks.

Had Flynn privately met or communicated with Kislyak during the summer or fall, it would mean Trump’s chief national security aide was secretly interacting with the representative of a foreign power as that government was mounting information and cyber warfare against the United States. Such an interaction could signal to the Vladimir Putin regime that Trump didn’t mind the Kremlin’s interference in the election and would be willing to work with Moscow despite its efforts to subvert the US election. And if Flynn held such conversations with the Russian ambassador, this could have bolstered the Kremlin’s preference for Trump over Hillary Clinton and provided Moscow with further incentive for intervening in the 2016 campaign to assist Trump—especially if there was any talk of a sanctions-for-Syria deal or other policy aims desired by Putin. (Then-Sen. Jeff Sessions, a top Republican supporting Trump, met with Kislyak at least twice in 2016, including in September in his Senate office.)

A lawyer for Flynn did not respond to a request for comment.

Months before he joined the Trump campaign, Flynn held at least one meeting with Kislyak. Prior to traveling to Moscow in December 2015 to attend a 10th anniversary gala dinner for RT, Russia’s English-language, government-backed television network—where Flynn sat at a table with Putin—he visited Kislyak’s home for a private chat. According to the House Intelligence Committee, this “meeting was later described by General Flynn’s son in an email to the Russian embassy as ‘very productive.'” (Flynn was paid $45,000 by RT for attending its gala and speaking at an associated conference.)

Parts of one of the pre-sentencing Flynn memos Mueller filed have been redacted. This includes paragraphs related to a criminal investigation apparently separate from Mueller’s probe. That’s one mystery that remains in the Flynn case. Another major question yet to be resolved is whether Flynn indeed was gabbing privately with Kislyak while the Kremlin was attacking the United States—and whether such communications might have encouraged the Russians to carry on with this assault. Mueller—or Flynn—would provide a great service if he could supply an answer to that.