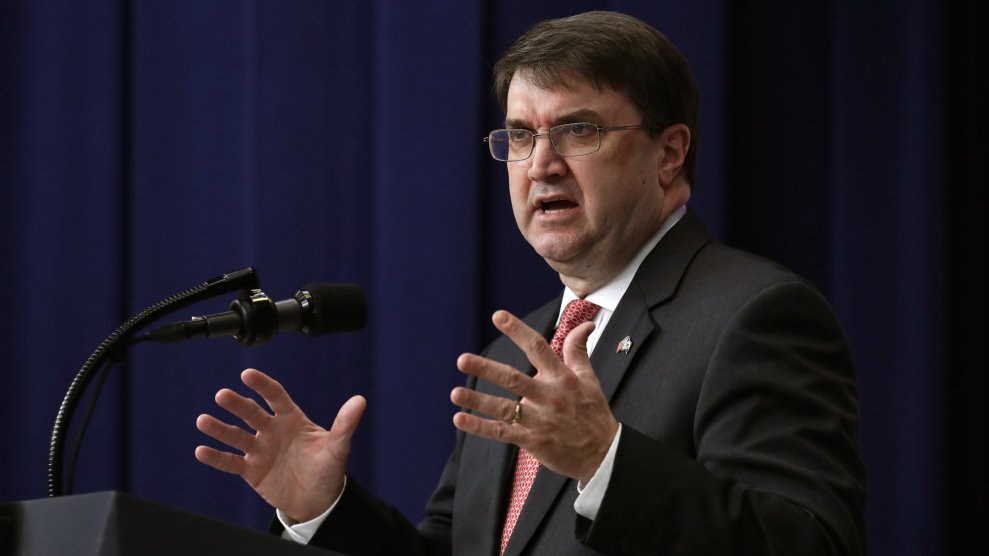 The Department of Veterans Affairs has been clear: Preventing suicide among the nation’s more than 20 million former service members is its top clinical priority. With a burgeoning suicide rate among veterans from the Iraq and Afghanistan wars, the VA has dumped more than $24 million since 2013 into a national outreach campaign for at-risk veterans centered around a one-stop crisis hotline.

But that ambitious outreach initiative has withered in recent years amid a leadership vacuum within the VA and unclear metrics for success, according to a report released this week by the nonpartisan Government Accountability Office. While the number of suicides among veterans was climbing steadily, the GAO found that the VA’s prevention efforts faltered without a permanent leader or clear chain of command in place.

“At a time when 20 veterans a day still die by suicide, VA should be doing everything in its power to inform the public about the resources available to veterans in crisis,” Rep. Tim Walz (D-Minn.), the ranking member of the House Veterans Affairs panel, said in a statement to Stars and Stripes after the report’s publication Monday. “Unfortunately, VA has failed to do that, despite claiming the elimination of veteran suicide as its highest clinical priority.”

“At a time when 20 veterans a day still die by suicide, VA should be doing everything in its power to inform the public about the resources available to veterans in crisis. Unfortunately, VA has failed to do that.”

Suicide rates have risen nationwide, but a veteran is nearly twice as likely to die by suicide as a non-veteran. Rates among active-duty service members are more comparable to the relevant civilian population, but the military-wide suicide rate still doubled between 2005 and 2012. No single issue leads to suicidal behavior, but recent scholarship that examines the wars in Afghanistan and Iraq has highlighted how the suicide risk for veterans increases as they are exposed to pain and desensitized to violence while deployed. Brain injuries and family history boost the risk as well.

When the suicide rate among veterans reached 27.4 per 100,000 persons in 2010, the VA embarked on a program to attempt to reach them before they were in crisis. The VA began paying a contractor for outreach, primarily as a vehicle to get out the word about its signature crisis hotline. In addition to managing the Veterans Crisis Line’s website, the contractor was also responsible for developing social media posts and messaging campaigns through billboards and flyers. The program saw a steady boost in content creation over its first four years before a sharp drop-off of more than 53 percent last year.

Without a permanent leader in place to sign off on outreach efforts, staffers redirected their time to “updating the [Veterans Crisis Line] website,” the report found. That same year, staffers working on the outreach campaign began reporting to officials in the Office of Mental Health, a change in direction that led to a greater focus on mental health outreach in lieu of strictly suicide prevention. Outside of simple metrics like tracking the number of people who visited the crisis hotline’s website, VHA officials also neglected to set measurable goals for the outreach program or any other “meaningful targets for evaluating the campaign,” the GAO reports. (Franklin was named permanent director in April.)

Despite the leadership vacuum and ensuing bureaucratic confusion, a remarkable amount of money was directed to the program. This fiscal year, the VA was allocated $6.2 million to spend on suicide prevention paid media—promoted social media posts and sponsored keyword searches, for example—but by September only spent $57,000 of its budget, less than 1 percent of the total. (Officials from the VA said they planned to spend up to $1.5 million by the close of the fiscal year.)

“This is unacceptable and I will be holding the VA accountable for doing better by veterans,” Sen. Jon Tester (D-Mont.), the incoming chair of the Senate Veterans Affairs Committee, said in a statement to Mother Jones. “Veterans in crisis must have confidence when they turn to the VA for help.”

Lawmakers in recent months have scrutinized a series of management miscues and controversial policy decisions in the VA. The list includes the underpayment of student veterans under the GI Bill and the Trump administration’s efforts to privatize elements of veteran health care. Privatizing veteran health care was only one of several initiatives championed by a trio of Trump’s friends, dubbed the “Mar-a-Lago Crowd” after an investigative report in ProPublica revealed their clandestine influence on veterans’ policy through private meetings with government officials at Trump’s Florida resort. Last week, the New York Times called congressional probes into misconduct at the VA a “rare area of bipartisan oversight in a blistering political environment.” Unused suicide prevention funds only create more fodder for the fury on Capitol Hill.

The priority of using social media as a suicide prevention strategy has also occasionally come under fire. Not all prevention experts agree that outreach through paid social media is the best way to reach at-risk veterans. “Why are mass market media campaigns so popular in spite of the fact there is no evidence they work and evidence they don’t?” asked a blog post by DJ Jaffe, executive director of the nonprofit Mental Illness Policy Org, which strongly advocates treatment of mental illness. “Money. It is very easy and profitable for a mental health provider to write a brochure, produce a PSA, rather than try to reduce suicide.”

Since 2016, VHA officials have attempted to shift the focus of the department’s awareness campaign away from simply drawing attention to the crisis line to a more “public health approach,” the GAO noted. But as recently as May 2018, department officials “were just beginning to conceptualize what the suicide prevention outreach campaign should look like moving forward” and never devoted substantial time to rethinking the campaign.

Franklin has since taken on the role of the VA’s suicide prevention director permanently while her old post—director of the Defense Suicide Prevention Office within the Pentagon—remains without a full-time leader. A Pentagon spokesperson told Mother Jones last month that officials were “in the process of assessing and interviewing the best qualified candidates” to take over the office.