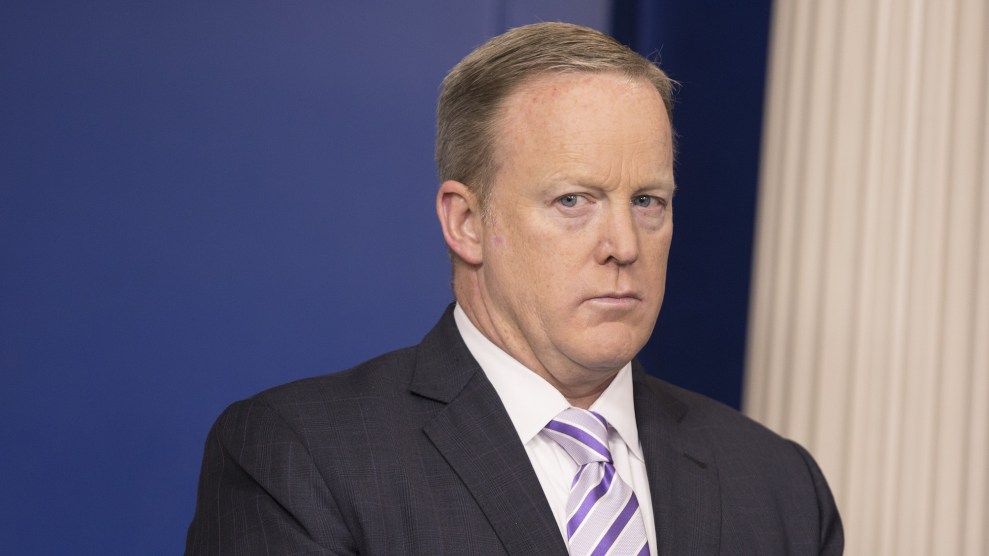 No one would accuse Sean Spicer of being a fashion or beauty influencer, but it turns out he has something in common with them: shady spon-con practices. In the seeming eternity since he exited the White House in July 2017, Spicer has been quietly using his online presence to drum up business for the betting app PredictIt, one of his podcast’s sponsors.

In addition to providing Spicer with a promo code for his podcast listeners—the URL he tweeted included the name of his show—the company confirmed Wednesday that it pays Spicer a commission for sign-ups. (PredictIt did not return Mother Jones‘ request for comment but told Washington Post reporter Drew Harwell the cut “was not that much.”)

“If there’s a connection between an endorser and the marketer that consumers would not expect and it would affect how consumers evaluate the endorsement, that connection should be disclosed. For example, if an ad features an endorser who’s a relative or employee of the marketer, the ad is misleading unless the connection is made clear. The same is usually true if the endorser has been paid or given something of value to tout the product. The reason is obvious: Knowing about the connection is important information for anyone evaluating the endorsement.” [Emphasis added]

The agency’s guide for promotional disclosures, which took approximately 30 seconds to find on Google, even outlines very specific protocols for Twitter:

The FTC isn’t mandating the specific wording of disclosures. However, the same general principle—that people get the information they need to evaluate sponsored statements—applies across the board, regardless of the advertising medium. The words “Sponsored” and “Promotion” use only 9 characters. “Paid ad” only uses 7 characters. Starting a tweet with “Ad:” or “#ad”—which takes only 3 characters—would likely be effective.”

Spicer has also posted content on his Instagram promoting the site, where you can bet on things like how long the White House press secretary will last.

If the FTC’s thorough guides to Twitter and Instagram seem highly specific, it’s because those are the platforms where the agency has cracked down the most on shadowy influencers who are getting paid big bucks to promote brands.

Mother Jones reached out to Spicer for comment and will update if we hear back.

Update Tuesday, December 6, 12:14 pm:  A spokesperson for the FTC says that the agency does not comment on whether or not it is investigating an individual or company, nor does it comment on open investigations.