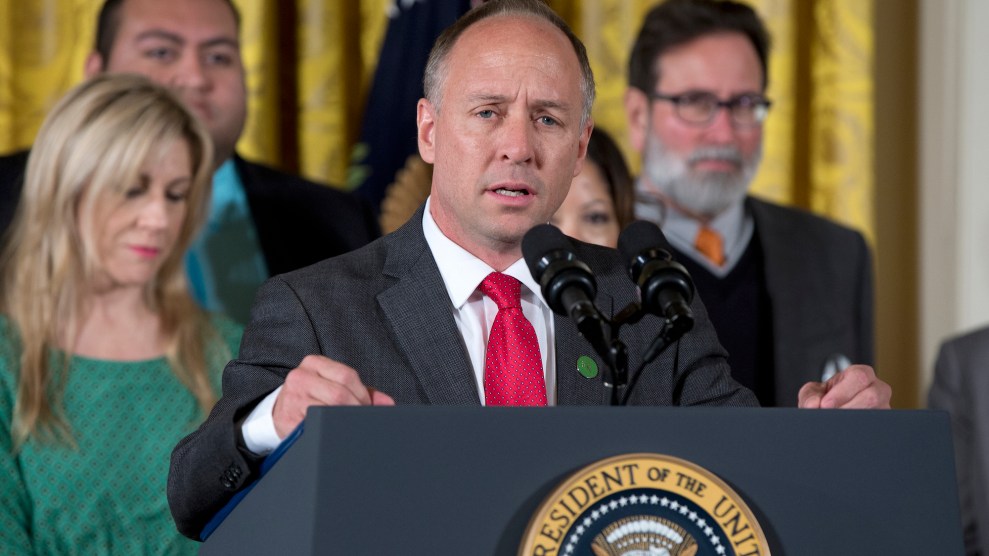 It’s been quite the year for Mark Barden, who lost his son Daniel in the Sandy Hook Elementary School shooting in Newtown, Connecticut, six years ago today. Sandy Hook Promise, the organization he co-founded to address school violence, rolled out an anonymous reporting system to help identify individuals who pose a risk to themselves or others. The STOP School Violence Act—the first federal legislation that Sandy Hook Promise ever spearheaded—became law, providing $100 million in funding to help schools implement safety programs.

“It’s been a transformational year. A lot of that is driven by catastrophic loss, and public opinion is now changing our political landscape.”

And as demands for federal gun reform reached a crescendo following the February school shooting in Parkland, Florida, Democrats tried to recruit Barden and Nicole Hockley—his Sandy Hook Promise co-founder, who also lost her son in the 2012 massacre—to run for Congress. They both ultimately declined, opting instead to continue running their organization.

“From the political perspective, it’s been a transformational year,” Barden tells me. “A lot of that is driven by catastrophic loss, and public opinion is now changing our political landscape.”

It’s a turn of events Barden couldn’t have imagined six years ago when he first waded into the gun violence prevention movement. Five months after his son’s murder, Barden lobbied for a federal bill to expand background checks to all gun sales and ban some semi-automatic weapons—a measure that was defeated by a filibuster in the Democratic-controlled Senate. Since then, gun control legislation hasn’t gotten a vote in either chamber of Congress, which had been fully under Republican control since 2015.

But that’s about to change. In a year marked by horrifying mass shootings in schools, newsrooms, and places of worship, voters elected a wave of candidates who put gun reform at the center of their platforms, and Democrats gained control of the House of Representatives for the first time since 2010. The new Democratic leadership has vowed to make stricter gun laws a top priority when Congress reconvenes in January.

The change is a sign of just how far the movement has come since Barden first lobbied on Capitol Hill nearly six years ago. Back then, guns were seen as a third-rail issue for politicians in both parties. Rep. Mike Thompson (D-Calif.), who chairs the House’s Gun Violence Prevention Task Force—a group that House Democratic Leader Nancy Pelosi (Calif.) established in the wake of Sandy Hook—says some of his colleagues resisted addressing the issue.

The difficult political environment is what encouraged Barden and Hockley to focus instead on other school safety measures at Sandy Hook Promise, which has proven to be a less polarizing path. Barden and Hockley have trained 3.5 million people in their “Know the Signs” program, which helps people identify those who might be capable of harming themselves or others. The initiative has helped educate people from across the political spectrum about preventable gun violence without making it about the weapons themselves.

“It’s the old grassroots model, and that’s been our intent,” Barden says. “You have to educate folks about reasonable lifesaving policy, and the laws will change in time. We’ve built this model that isn’t dependent on an act of Congress, and I’ve enjoyed seeing our theory of change succeed.”

Barden is nonetheless thrilled that a chamber of Congress will be in a position to vote on the gun control measures he’s wanted to see pass for the last six years. He hopes the House will take up universal background checks and red flag laws, which allow law enforcement to take away weapons from those who pose a risk to themselves or others. He also wants to see Congress provide federal funding to the Centers for Disease Control and Prevention to study gun violence as a public health concern—something Republicans have previously blocked. “Maybe we’ll be able to study the numbers and finally observe how smart policy can help stop this,” he says.

Thompson says he plans to introduce a background check bill with at least five Republican co-authors next year, and he’s hoping the House will hold hearings on red flag laws and assault weapons. He’s in the process of collecting ideas from the newest members of the Gun Violence Prevention Task Force. There are a lot of voices to listen to—at least 15 incoming lawmakers have joined the group since the November election. That includes Barden’s own representative in Congress, newly elected Democrat Jahana Hayes.