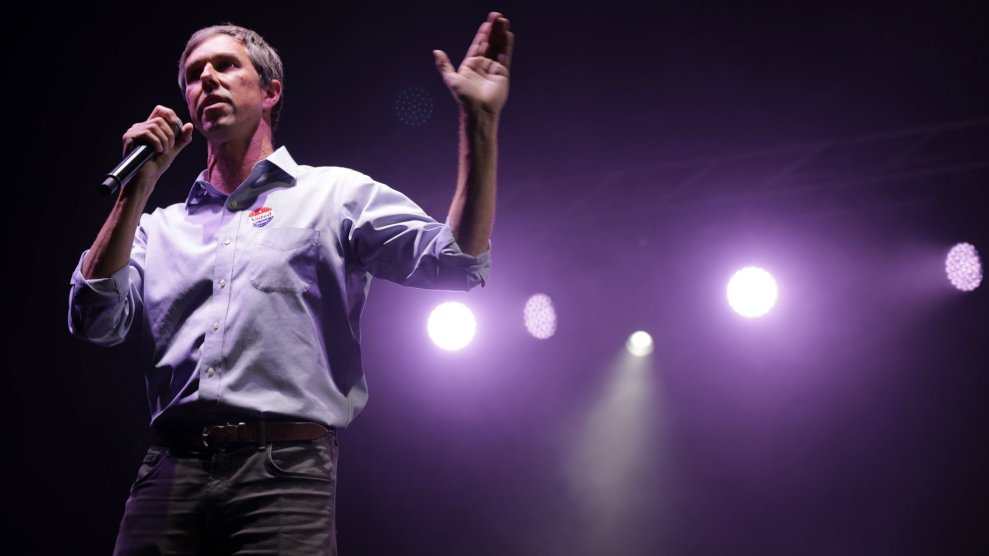 Beto O’Rourke is the latest potential 2020 presidential candidate to get behind a Green New Deal.

In a statement to HuffPost, a spokesman for O’Rourke, whose high-profile bid to unseat Sen. Ted Cruz (R-Texas) propelled the former House Democrat from Texas onto the national stage last year, said he is “supportive of the concept” of a Green New Deal and “how it invests in green jobs.”

“[He] is looking forward to engaging more on the issue as it continues to develop,” Chris Evans, a spokesman for O’Rourke, said by email Friday. “As he mentioned while traveling to every county across Texas during his senate campaign, he’s proud to come from a renewable energy producing state that is number one in wind power production, number one in wind power jobs and number one in solar energy potential.”

Three days ago, Sen. Elizabeth Warren (D-Mass.), who on Monday announced the launch of an exploratory committee for a presidential bid, told Axios she supports the “idea” of a Green New Deal.

The term surged into mainstream political discourse just two months ago when activists staged a protest in now–House Speaker Nancy Pelosi’s office, demanding that the incoming Democratic majority in the House champion a sweeping climate policy to zero out greenhouse gas emissions and combat worsening income inequality. Rep. Alexandria Ocasio-Cortez (D-N.Y.) proposed a resolution to establish a select committee on a Green New Deal and garnered support from about 40 House Democrats.

Democratic leadership rejected the plan, but the effort succeeded in shifting the climate debate in the direction scientists say matches the extent of the crisis. By mid-December, more than 300 local and state officials voiced support for a Green New Deal in an open letter. Days later, a poll from Yale University and George Mason University found 81 percent of registered voters surveyed said they supported a Green New Deal, including 64 percent of Republicans and 57 percent of conservative Republicans.

Ninety-two percent of Democrats said supported the concept, including 93 percent of liberal Democrats and 90 percent of moderate to conservative Democrats.

That popularity is reflected in the growing number of likely presidential contenders endorsing a Green New Deal with varying degrees of couched language.

Sen. Bernie Sanders (I-Vt.), who sponsored what some saw as an early version of the Green New Deal in 2012, backs the policy and is planning to introduce legislation on it this year. Sen. Jeff Merkley (D-Ore.) was among the first in the Senate to endorse Ocasio-Cortez’s select committee push. Long shot Richard Ojeda, a populist Democrat from West Virginia’s coal country who was the first to announce a bid for president, shortly after losing a House race in November, gave the Green New Deal his full-throated support.

A spokeswoman for Sen. Kamala Harris (D-Calif.) indicated her support for a Green New Deal last month. Days later, Sen. Cory Booker (D-N.J.) announced his support for the policy in a tweet.

“We’re excited to see so many 2020 hopefuls and 2020 potential candidates embracing the idea of a Green New Deal,” Corbin Trent, a spokesman for Ocasio-Cortez, said by phone Friday. “We hope to further define the scope and scale of what the Green New Deal is and what it can do for our economy and our country.”

O’Rourke’s embrace of a Green New Deal is likely to face skepticism among progressives advocating the policy. He won early endorsements from environmental groups when he challenged Cruz, a climate change denier and fossil fuel ideologue. But O’Rourke, who declined donations from corporate political action committees during his Senate campaign, generated controversy last month over fossil fuel donations he received.

O’Rourke had won plaudits for taking the No Fossil Fuel Money pledge administered by the watchdog group Oil Change USA, which bars politicians from accepting contributions over $200 from “PACs, executives, or front groups of fossil fuel companies.” In December the investigative news site Sludge found that he accepted $430,000 from individuals working in the oil and gas industry, 75 percent of which came in the form of donations over $200. Fossil fuel executives made at least 29 large donations.

He was removed from the No Fossil Fuel Money pledge roster, and the revelations prompted fresh scrutiny of his voting record. The Houston Chronicle, the newspaper of record in Texas’ biggest city, criticized his oil and gas ties in an editorial and warned that “if fans of fossil fuels can’t find an effective way to address climate change, Texas will have to start dealing with problems even more destructive than an oil bust.”

Sunrise Movement co-founder Varshini Prakash, whose climate-justice group spearheaded the push for a Green New Deal, said the growing number of 2020 presidential contenders backing the policy “shows how much the movement has shifted the conversation on climate in American politics.”

“In 2019, we’ll be organizing all across the country to build on the momentum and make it clear to all politicians that if they want to be taken seriously by young people, they need to sign the No Fossil Fuel Money Pledge and back the Green New Deal,” she said by email.

Still, to some, a lawmaker from a top oil-producing state like Texas nodding to a Green New Deal signals “a major shift” in the national debate, said Robert Kopp, a climate scientist at Rutgers University who is tracking how the policy is being discussed.

“If we’re going to make this transition, it has to be a transition that engages the whole country, so it is important that it’s not just a dialogue led by people in New York and Massachusetts,” he said by phone. “It has to encompass all parts of the country.”