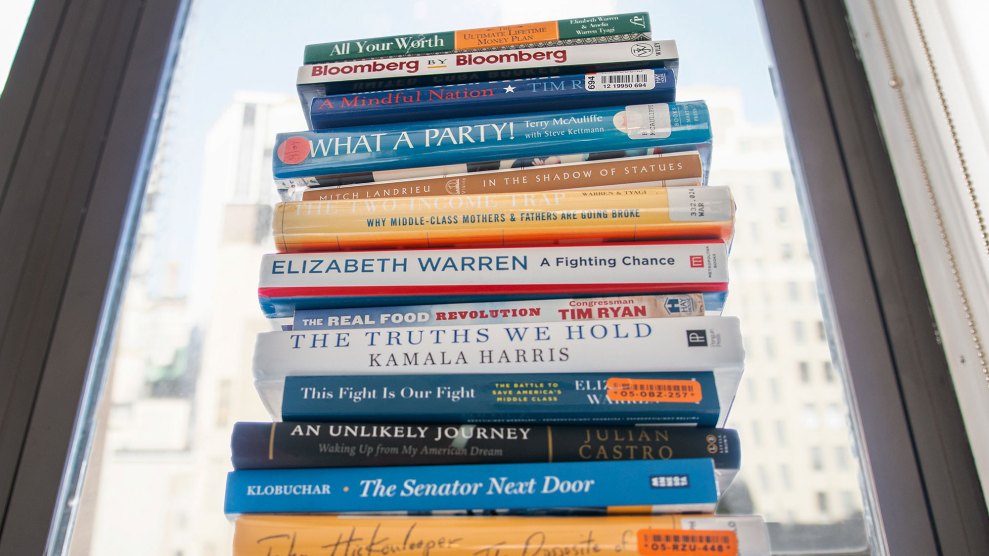 On the windowsill in my office, there’s a stack of books that’s been growing over the past month. It is the collected writings of the 2020 Democratic presidential field, and at 16 volumes and counting, it’s starting to block out the sun. When I ordered them not too long ago, in that post-midterms haze where anything seemed possible, the prospect of methodically working through a stack of platitude-laden personal odysseys sounded manageable—promising, even. But this was hubris. Clocking in at more than 5,000 pages, I could read War and Peace four times over.

Fortunately, it turns out you can learn a lot just by reading the blurbs on the front and back covers. Political memoirs and their first cousin, the policy manifesto, are a principal way that politicians introduce themselves to a national audience. Who they pick to write letters of recommendation on their behalf can tell you a lot about what kind of public figure they want to be, who they admire, and what they want you to take away. Or sometimes it just tells you who they went to college with.

Former Colorado Gov. John Hickenlooper’s 2016 debut, The Opposite of Woe: My Life in Beer and Politics, is one of the more revealing 2020 memoirs, in the sense that it includes a photo insert of Hickenlooper, from back when he was just a brewery owner, sitting naked on a bar with a construction hat over his junk on his 40th birthday. But it’s also unusually revealing about why it exists.

Hickenlooper’s memoir is the only one of the lot that breaks the fourth wall and explicitly begs the author to run for higher office on the back cover. The person who does this is New Yorker writer Malcolm Gladwell—an Aspen-style thinkfluencer perfectly suited for a politician who’s sought to define himself as an outside-the-box alternative. “Read this book,” Gladwell demands of us. “Pause and reflect on how thoughtful and intelligent and charming John Hickenlooper is. Then hope to God he runs for president one day.”

That’s it. That’s the only blurb. It’s a book so thirsty you’ll need a beer to go with it.

Former New York City mayor and billionaire media mogul Michael Bloomberg’s 1997 memoir is called Bloomberg by Bloomberg. In fact, his first name is missing from the front of the book altogether—you’ll just have to start reading to learn his name is Michael. I’m not sure the ensuing 252 pages could shed much more light on the man than that simple fact, and some of the reviewers aren’t either. (“The man with Wall Street’s best known generic name” is how hedge fund billionaire Julian Robertson introduces him on the back.) But there’s enough there to out hizzoner as an unrepentant plutocrat. Bloomberg touts praise from two more billionaires—Fox News founder Rupert Murdoch (“Michael Bloomberg is the most creative media entrepreneur of our time”) and Richard Branson (“This is the best insight yet on how one man shook up the entire financial information industry.”)

Those are two names you aren’t likely to see on a Democratic National Convention stage—but then again, you could have said that about Bloomberg once, too.

Former Housing and Urban Development Secretary Julian Castro’s An Unlikely Journey: Waking Up From My American Dream quotes Castro’s keynote speech at the 2012 Democratic National Convention. Massachusetts Sen. Elizabeth Warren’s 2014 book, A Fighting Chance, just quotes Elizabeth Warren. (Try her 2017 reboot, This Fight Is Our Fight: The Battle to Save America’s Middle Class if you want to read what Paul Krugman thinks.) Vermont Sen. Bernie Sanders has pushed out two new releases since 2016, none of which featured anyone but Bernie (perhaps Rupert Murdoch passed), but the reissue of his 1997 memoir, Outsider in the House, boasts an awkward dinner party of celebrity backers—Cornel West, comedian Sarah Silverman, Ben and Jerry’s co-founder Ben Cohen, and environmental activist Bill McKibben.

The adage that you should not judge a book by its cover has always been imperfect, but it applies not at all to former Virginia Gov. Terry McAuliffe’s What a Party! My Life Among Democrats: Presidents, Candidates, Donors, Activists, Alligators, and Other Wild Animals. Like McAuliffe, the cover itself seems on the verge of going hoarse from all the shouting. The lead character witness for McAuliffe is McAuliffe, who describes himself—in a two-paragraph, front-cover block quote—as “an Irish storyteller” who will do his best “to present all his stories in this book in as accurate a light as possible,” but can’t make any promises.

One of McAuliffe’s defining traits is that he is the very embodiment of what people mean when they talk about “Clintonworld,” and the family appropriately lands three photos and two blurbs on McAuliffe’s book jacket. “I thought I knew Terry McAuliffe as well as anyone, but this time he surprised even me,” writes Bill Clinton. “Who knew Terry could sit still long enough to give us a book this good?” Adds Hillary: “I’ve often said Terry’s energy could light up a city, and readers of his book will know why.”

Former President Jimmy Carter is on there too, not because he has anything especially interesting to say (“his accounts are both humorous and informative,” Carter writes), but because he’s an ex-president whom McAuliffe knows, and a primary function of the book, we seem to know, is for McAuliffe to talk about all the people he’s met. (Spotted in the inside photo spread: the pope, Ben Affleck, and Yasser Arafat.)

Also basking in the Clinton aura is Ohio Rep. Tim Ryan, who touts endorsements from the former commander in chief on both A Mindful Nation: How a Simple Practice Can Help Us Reduce Stress, Improve Performance, and Recapture the American Spirit (spoiler: the simple practice is meditation) and The Real Food Revolution: Healthy Eating, Green Groceries, and the Return of the American Family Farm.

There’s a simple reason for this, it turns out. Ryan and Clinton share not just a similar outlook on the party’s struggles with working-class white voters in the Midwest, but also a personal wellness guru, Dr. Mark Hyman, who wrote the preface to Real Food.

The rest of Ryan’s lineup is all over the place: Arianna Huffington; food policy expert Marion Nestle; alternative-medicine advocate Deepak Chopra; Ohio Sen. Sherrod Brown; and Vani Hari, the blogger otherwise known as the “Food Babe.” We even hear from hip-hop impresario Russell Simmons, who gushes: “If more politicians can follow Congressman Ryan’s lead and look to harness the power of mindfulness, then the future of this country will be bright.” (This was written in 2012, so before Simmons was accused by multiple women of rape.)

The front cover of Minnesota Sen. Amy Klobuchar’s The Senator Next Door: A Memoir From the Heartland describes it as “The Lean In of political memoirs” (per the New Republic), and Facebook CEO Sheryl Sandberg herself is right there on the back, praising the senator’s “incredible perseverance…warmth, humor, and candor.”

It’s an eclectic lineup of endorsers, less affiliated with any partisan slant or ideology than with having a high Q Score among NPR listeners. This is a book that puts asides its differences to work across the aisle. There’s Garrison Keillor (oof); self-described “Tiger Mother” and Princeton professor Amy Chua; late Arizona Sen. John McCain; and biographer Walter Isaacson (who also blurbed former New Orleans Mayor Mitch Landrieu’s In the Shadow of Statues: A White Southerner Confronts History). Those folks might not agree on everything, but they all evidently agree that Amy Klobuchar is funny.

New York Sen. Kirsten Gillibrand likewise brought the star power in Off the Sidelines: Speak Up, Be Fearless, and CHANGE YOUR WORLD—so much so that the blurbs continue inside the book. An archetype of the campaign memoir genre (there’s a forward by Hillary Clinton), she lines up praise from Huffington (“a handbook for the next generation of women to redefine their role in the world”), feminist icon Gloria Steinem (“helpful…readable…down-to-earth”), and actress Connie Britton (who roomed with Gillibrand when they were both at Dartmouth). Inside there’s more—tennis star Billie Jean King, Orange is the New Black author Piper Kerman, and Xerox CEO Ursula Burns.

Gillibrand, who helped push former Sen. Al Franken into an early retirement last year, understands this: The surest way to make sure your book stays free of misbehaving men is to not have any men on it at all.