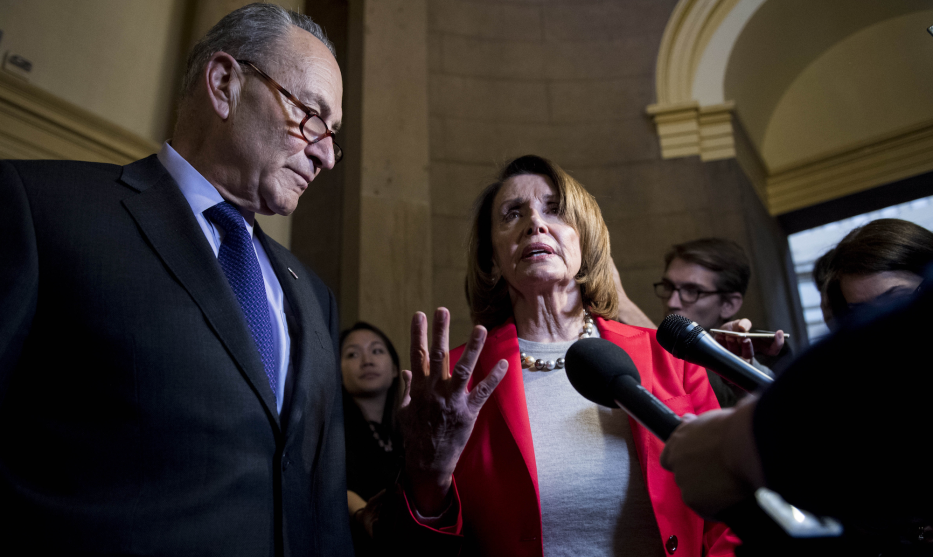 The Democratic leaders urged Trump to end the partial government shutdown that has left nearly 800,000 federal workers furloughed or working without pay over his demands to appropriate $5 billion to build a wall along the US-Mexico border. “President Trump must stop holding the American people hostage, must stop manufacturing a crisis, and must reopen the government,” Pelosi said.

You can read the transcript of their remarks below:

Speaker Pelosi: I appreciate the opportunity to speak directly to the American people tonight about how we can end this shutdown and meet the needs of the American people. Sadly, much of what we have heard from President Trump throughout this senseless shutdown has been full of misinformation, and even malice. The president has chosen fear. We want to start with the facts.

The fact is: On the very first day of this Congress, House Democrats passed Senate Republican legislation to reopen government and fund smart, effective border security solutions. But the president is rejecting these bipartisan bills which would reopen government over his obsession with forcing American taxpayers to waste billions of dollars on an expensive and ineffective wall—a wall he always promised Mexico would pay for! The fact is: President Trump has chosen to hold hostage critical services for the health, safety, and well-being of the American people and withhold the paychecks of 800,000 innocent workers across the nation—many of them veterans. He promised to keep government shut down for “months or years”—no matter whom it hurts. That’s just plain wrong.

The fact is: We all agree that we need to secure our borders while honoring our values: We can build the infrastructure and roads at our ports of entry; we can install new technology to scan cars and trucks for drugs coming into our nation; we can hire the personnel we need to facilitate trade and immigration at the border; and we can fund more innovation to detect unauthorized crossings.

The fact is: The women and children at the border are not a security threat, they are a humanitarian challenge—a challenge that President Trump’s own cruel and counterproductive policies have only deepened. And the fact is: President Trump must stop holding the American people hostage, must stop manufacturing a crisis, and must reopen the government.

My fellow Americans, we address you tonight for one reason only: The President of the United States—having failed to get Mexico to pay for his ineffective, unnecessary border wall, and unable to convince the Congress or the American people to foot the bill—has shut down the government. American democracy doesn’t work that way. We don’t govern by temper tantrum. No president should pound the table and demand he gets his way or else the government shuts down, hurting millions of Americans who are treated as leverage. Tonight—and throughout this debate and his presidency—President Trump has appealed to fear, not facts. Division, not unity. Make no mistake: Democrats and the president both want stronger border security. However, we sharply disagree with the president about the most effective way to do it. So, how do we untangle this mess? There is an obvious solution: separate the shutdown from the arguments over border security. There is bipartisan legislation—supported by Democrats and Republicans—to reopen government while allowing debate over border security to continue.

There is no excuse for hurting millions of Americans over a policy difference. Federal workers are about to miss a paycheck. Some families can’t get a mortgage to buy a new home. Farmers and small businesses won’t get loans they desperately need. Most presidents have used Oval Office addresses for noble purposes. This president just used the backdrop of the Oval Office to manufacture a crisis, stoke fear, and divert attention from the turmoil in his administration.

My fellow Americans, there is no challenge so great that our nation cannot rise to meet it. We can reopen the government and continue to work through disagreements about policy. We can secure our border without an expensive, ineffective wall. And we can welcome legal immigrants and refugees without compromising safety and security. The symbol of America should be the Statue of Liberty, not a 30-foot wall. So our suggestion is a simple one: Mr. President, reopen the government and we can work to resolve our differences over border security. But end this shutdown now.