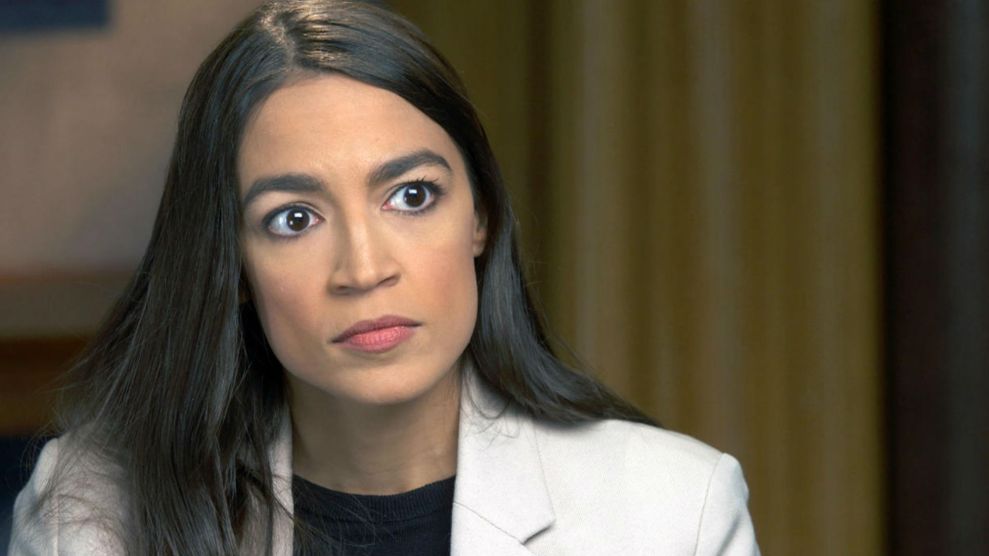 In a 60 Minutes interview with Anderson Cooper on Sunday evening, Rep. Alexandria Ocasio-Cortez, the 29-year-old democratic socialist from New York who, along with all other new members of Congress, was sworn in on January 3, said President Donald Trump is a racist, “no question.”

Cooper played it straight. “How can you say that?” he replied.

“When you look at the words that he uses, which are historic dog whistles of white supremacy,” she said, “when you look at how he reacted to the Charlottesville incident, where neo-Nazis murdered a woman, versus how he manufactures crises like immigrants seeking legal refuge on our borders, it’s—it’s night and day.”

.@AOC says the president is a racist, “no question.” The White House told 60 Minutes that President Trump “has repeatedly condemned racism and bigotry in all forms.” https://t.co/HmucF1z6zg pic.twitter.com/N5RlRfHoA9

Ocasio-Cortez also said her idea of “socialist” policies resembles “what we see in the UK, in Norway, in Finland, in Sweden,” not places like the Soviet Union, Cuba, or Venezuela, which Trump and others cite to bash her. And Democrats, she said, have compromised too much in the past.

A clip from Sunday’s interview, in which Ocasio-Cortez suggested the idea of high marginal tax rates on the super-rich, went viral earlier this week. “When you have a progressive tax rate system, your tax rate, you know, let’s say, from zero to $75,000 [is] maybe 10 percent or 15 percent, etc.,” she said. “But once you get to, like, the tippy tops—on your 10 millionth dollar—sometimes you see tax rates as high as 60 or 70 percent. That doesn’t mean all $10 million are taxed at an extremely high rate, but it means that as you climb up this ladder, you should be contributing more.”

70% tax rates on the very rich would help pay for the #GreenNewDeal to combat climate change, @AOC told Anderson Cooper: “Only radicals have changed this country.” https://t.co/MWDhzh4hTr pic.twitter.com/NTuaJ38cbC

Also this week, Ocasio-Cortez adeptly parried criticism from Republicans, including GOP campaign consultant Ed Rollins, who on Friday called her “the little girl” on Fox Business’ Lou Dobbs Tonight show. And after a Twitter user, with the intention of embarrassing her, surfaced a video of Ocasio-Cortez dancing on a rooftop during her college days, she responded with a new video.

I hear the GOP thinks women dancing are scandalous.

Wait till they find out Congresswomen dance too! 💃🏽

Have a great weekend everyone 🙂 pic.twitter.com/9y6ALOw4F6