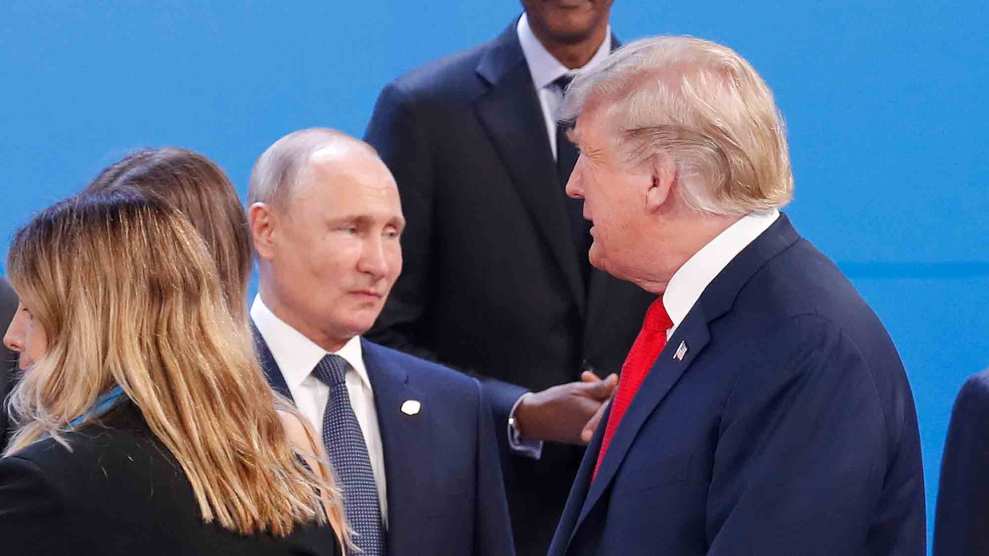 In normal times, this would be an absurd moment: The president of the United States being asked the question, “Are you now or have you ever worked for Russia?” And more absurd: the president not answering the query. That’s what happened on Fox News this past weekend after the New York Times posted a blockbuster article reporting that the FBI began a counterintelligence investigation of President Donald Trump in May 2017, after he fired FBI Director James Comey, to determine if Trump was somehow collaborating, wittingly or unwittingly, with Moscow. Trump eventually got around to telling reporters, “I never worked for Russia.” But Trump has never fully confronted a fundamental fact of the Trump-Russia scandal: He was a legitimate counterintelligence concern for US intelligence as soon as he became the Republican nominee for president.

Trump’s pro-Russia actions—taken while Russian President Vladimir Putin’s regime was attacking the 2016 election—were no secret. Shortly after Democratic emails and documents stolen by Russian hackers were released at the start of Democrats’ presidential convention, Trump called on Moscow’s hackers to target Hillary Clinton. (Later that day, Russian hackers did try to penetrate Clinton’s personal server, according to an indictment filed by special counsel Robert Mueller.) And more significantly, throughout the summer and fall of 2016, Trump repeatedly dismissed the notion that Russia was behind the hack-and-dump operation waged against the Clinton campaign.

“It was unbelievable to us,” a former FBI official told me. “It almost became a joke. Trump kept saying things we knew that were wrong. And they matched what Moscow was saying. We kept shaking our heads at that.”

He did so in public statements and during the presidential debates, derisively downplaying Russian involvement. “It also could be somebody sitting on their bed that weighs 400 pounds,” he snorted at one debate. And here’s the key point: He did this after he received a private briefing in mid-August 2016 from the US intelligence community in which he was told that Putin’s regime was behind the Russian attack. Trump also stuck to this line after the Obama administration in early October 2016 released a public statement declaring that Moscow was the culprit.

So here’s a question that should be posed to Trump: Why did you repeatedly assert that Russia was not attacking the United States after you were told by US intelligence experts it was?

Trump’s denials were echoed by his campaign and top aides. The day after the news broke that the Democratic National Committee had been cyber-assaulted and the perps were probably Russian hackers, the Trump campaign called this a hoax orchestrated by the Democrats themselves. Both Donald Trump Jr. and Paul Manafort, when he was the campaign chairman, publicly maintained that talk of Russian involvement in the election was crap. And they did so after attending a private meeting with a Russian emissary whom they were told would bring them dirt on Clinton as part of a secret Kremlin effort to help the Trump campaign.

These declarations from Trump and his minions echoed and boosted Moscow’s disinformation. Putin’s government, naturally, claimed it had nothing to do with the undercover cyber-raids against the Democrats and the subsequent document releases. Putin himself scoffed at the reports that Moscow was waging information warfare against American democracy. And there was Trump saying much the same thing.

Any counterintelligence expert in the FBI would have serious reason to worry about this. And they did. I recently spoke to a former FBI official who was in the bureau at the time. “It was unbelievable to us,” he told me. “It almost became a joke. Trump kept saying things we knew that were wrong. And they matched what Moscow was saying. We kept shaking our heads at that.”

This was occurring against a bizarre backdrop: For years, Trump had been making positive statements about Putin that politicians, pundits, and US intelligence officials considered rather curious. (It was not known during the campaign that Trump was secretly pursuing a tower project in Moscow that could reap him hundreds of millions of dollars—an endeavor that likely could not succeed if Trump, as a candidate, was critical of Putin and Moscow.) Now Trump was defending Putin and amplifying his cover-up. And Trump’s denials were significant. With the GOP presidential candidate suggesting the accusations against Russia were false, leading congressional Republicans, most notably Senate Majority Leader Mitch McConnell, declined to join with the Obama administration to craft a forceful and bipartisan response to the Russian assault.

When counterintelligence folks spot someone promoting disinformation from a foreign adversary, it certainly draws attention. Plus, the FBI by mid-summer 2016 had related concerns, particularly interactions between Russia and several Trump campaign aides (including Carter Page, George Papadopoulos, Michael Flynn, and Manafort). And at some point during the campaign, the bureau received the memos written by former British intelligence officer Christopher Steele alleging a Moscow plot to cultivate and co-opt Trump. In the fall of 2016, prior to Election Day, I heard from several national security experts in Washington that their friends and contacts within the intelligence community were highly alarmed by the prospect that Trump could become president, and the focus of that worry was Russia, Russia, and Russia.

The Times reports that “agents and senior F.B.I. officials had grown suspicious of Mr. Trump’s ties to Russia during the 2016 campaign but held off on opening an investigation into him…in part because they were uncertain how to proceed with an inquiry of such sensitivity and magnitude.” This was indeed something completely different for the bureau. Trump, by design or not, was acting in concert with a foreign government attacking a US election. And FBI officials could justifiably ask whether he was directly or indirectly in cahoots with Moscow. Yet they did not open an official inquiry into Trump at that point. (Here’s more proof that the right-wing, Fox News-pushed conspiracy theory that the FBI was out to sabotage Trump during the campaign is pure bunk.) In private testimony provided to House members in July, former FBI lawyer Lisa Page hinted that FBI officials had pondered whether to investigate Trump prior to his firing of Comey. And Comey has testified that he rebuffed Trump’s request that he publicly state that Trump was not under investigation—a stance that would make plenty of sense if the bureau was not at that point officially investigating Trump but might end up doing so.

Much of the Trump-Russia scandal can seem complicated—and Trump and his defenders have done all they can to create distractions and diversions. But at the center of the affair is an undeniable reality: During the campaign Trump took actions that aided the Russian attack, and as president he continued to bolster Putin’s propaganda line that Moscow had not intervened in the American election. A presidential candidate and president abetting an overseas foe is a counterintelligence nightmare. It’s no wonder that the bureau cautiously approached this matter and did not kickstart a probe until Trump fired Comey and publicly stated that he had pink-slipped the FBI director in part to sideline the Russia probe.

Trump was always a counterintelligence concern for the US national security establishment. His puzzling statements about Putin and his troubling reactions to Russia’s attack on American democracy were highly disquieting. Yet the bureau held back. It proceeded with investigations of Russia’s operation and several Trump campaign associates. But it initially kept Trump off the griddle. Perhaps that was prudent. But the FBI came to believe it had enough cause to take the monumental step of opening a counterintelligence investigation of a sitting president. Now that this is public, one big question is: What did the FBI find? Counterintelligence investigations are the most sensitive probes that the bureau conducts—far more secretive than criminal investigations. So there is no guarantee that any final Mueller report released to the public will address this matter. But the American citizenry does not need any report to know that Trump repeatedly acted as if he were a Moscow asset. And the fact that this has not caused a greater uproar is perhaps one of the most disconcerting and absurd elements of the entire scandal.