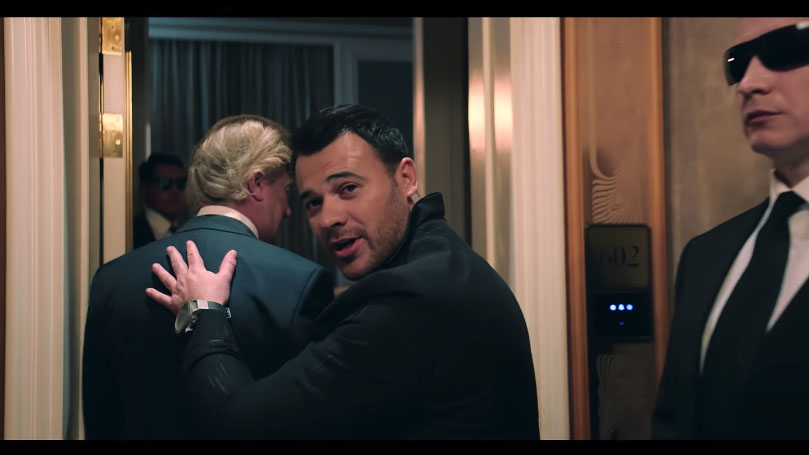 Russian singer Emin Agalarov is taking his sultry ballads and pop numbers on a four-city North American tour later this month. And as much as he’d like to focus on his American fans, Emin—who helped orchestrate the private June 2016 Trump Tower meeting between a recently indicted Russian emissary and Donald Trump Jr., Jared Kushner, and the now-imprisoned Paul Manafort—may not be able to avoid the attention of one particular American who has little interest in his music: special counsel Robert Mueller.

Emin’s father has close ties to the Putin regime.

With shows scheduled in New York, Toronto, Miami, and Los Angeles that are, according to his publicist Ric Salmon, “nearly” sold out, Emin’s tour comes just six months after news broke that the special counsel has been pressing for an interview with the singer, who is the son of President Donald Trump’s most prominent Russian business partner, Aras Agalarov. And Emin’s plans to spend time in the United States suggest that he has already answered questions from the special counsel or is prepared to do so when he arrives. Otherwise, the singer should certainly expect a visit from the special counsel’s investigators—perhaps as soon as his flight lands.

“There’s no doubt about it; he’s a key guy here,” says Dorsey & Whitney partner Nick Akerman, a former federal prosecutor who worked on the Watergate case. “If Agalarov hasn’t reached some arrangement before this, or if they had and he hasn’t told the truth, the first thing I would do the minute he got off the plane is hit him with a subpoena or get a material witness warrant for his arrest. So the only singing he may have to do is before a grand jury.”

Emin and his team are so far keeping mum about the situation. “We’re looking forward to the tour,” Salmon says, “and we’re looking forward to the shows. We don’t have any other expectations.” When asked whether the tour has prepared for the possibility that Emin could be stopped or apprehended for questioning, Salmon replied, “I’m not going to answer that on the record. It’s not something I have an opinion about or would be interested in talking about.”

Emin’s lawyer, Scott Balber, declined to answer Mother Jones‘ questions about the current status of Emin’s cooperation with the special counsel, but in August, he told NBC that “conversations are ongoing” about a potential interview and had been for a year. Balber then said his client wasn’t “enthusiastic” about traveling to the United States to sit for questions.

Akerman points out that Emin’s role in orchestrating the Trump Tower meeting may only be part of what Mueller’s team would want to talk about. A separate criminal indictment unsealed this week against the Kremlin-linked lawyer who attended that June 2016 meeting, Natalia Veselnitskaya, suggests the special counsel’s team has copies of her email inbox going back to 2014, raising the possibility of correspondence involving Emin in the years leading up to the election.

“If they’ve got other emails, other correspondence with her relating to this Trump Tower meeting, and Agalarov comes up and it contradicts what he’s already told them, he’s toast,” Akerman says. “He’s never going to make it to Canada.”

Emin’s first performance is set for New York City on January 26, after which he is slated to head to Toronto, returning to the United States the next day for the Miami show. The special counsel’s office has previously stopped people of interest at American airports following international flights. Last year, agents questioned and searched the devices of billionaire businessman Viktor Vekselberg at a New York-area airport after he’d landed on a private jet. Former Trump campaign adviser George Papadapolous, who recently served two weeks in prison for lying to the FBI about contacts with Russian intermediaries, and George Nader, a United Arab Emirates adviser with ties to Trump aides, were each stopped at Washington Dulles International Airport by the special counsel’s team. (Papadapolous was arrested; Nader was handed a grand jury subpoena.)

Emin’s final US show was originally scheduled for February 3 in Denver, Colorado. But that performance disappeared from Emin’s website during the fall, and the venue, the Newman Center for the Performing Arts, confirmed to Mother Jones that it has been cancelled. According to the venue, Six Row Productions—which bills itself as the largest promoter of Russian concerts in the United States—rented space for the event and later called it off. Six Row told Mother Jones the show was cancelled for “logistical reasons.” Salmon declined to explain the cancellation.

“The only singing he may have to do is before a grand jury.”

Emin’s father, Aras Agalarov, who has close ties to the Putin regime, is the president of Crocus Group, one of Russia’s most prominent development firms. He has won lucrative government contracts for Crocus, where Emin serves as a vice president. The company’s prestigious development portfolio boasts a slew of complex and high-stakes infrastructure projects, including two 2018 World Cup stadiums. In 2013, the Agalarovs partnered with Trump to bring the Miss Universe contest—which Trump co-owned—to Moscow. They even tried to help Trump with his (ultimately unsuccessful) mission to meet Russian President Vladimir Putin while he was visiting Moscow. During that trip, Trump filmed a cameo for an Emin music video featuring several Miss Universe contestants. After collaborating on the pageant, the Trump and Agalarov families worked on a Trump Tower project in Moscow. Emin toured sites for the tower with Ivanka Trump, but the project fizzled out in 2014, in part because of sanctions imposed on Russia by the Obama administration and the European Union for Russia’s annexation of Crimea.

Emin and his father first came to wide attention in the United States following revelations that they helped set up the 2016 Trump Tower meeting between Veselnitskaya and Trump Jr., Kushner, and Manafort. The meeting took place after Rob Goldstone, then Emin’s publicist, emailed Trump Jr. with an offer from a senior Russian official to provide Trump’s campaign “dirt” on Hillary Clinton. Goldstone noted in his email to Trump’s eldest son that this effort was “helped along by Aras and Emin.” Goldstone also reported to Trump Jr. that this offer was part of a secret Kremlin plan to help the Trump campaign.

Emin’s pop music is far more popular in Russia and Azerbaijan—where he was born and was once married to the president’s daughter—than it is in the United States. In June, Emin, who spent his teen years in New Jersey, took advantage of his newfound notoriety in the West by releasing a music video for his song “Got Me Good” that made light of Trump’s scandals. In the video, Emin sits behind a wall of screens monitoring the actions of actors playing Trump, Clinton, Stormy Daniels, Ivanka Trump, Kushner, and Mark Zuckerberg. As the group moves through a luxury hotel, Ivanka carries an unmarked briefcase, and Daniels gets a secret wad of cash. At one point, in apparent reference to the rumored “pee tape” capturing Trump cavorting with women in Moscow, Emin erases Trump from video footage of a party with models in a hotel room.

This past August, Emin plugged his upcoming US tour to his 1.1 million Instagram followers with a reference to Mueller’s interest in interviewing him. “I suppose any publicity is good publicity, but guys there’s a limit,” he wrote. In December, he suggested the attention was an unwelcome distraction. “Before this whole Trump situation, I was doing interviews worldwide,” he told the Daily Mail. “The biggest issue I talked about is the music and my songs. Now there’s a bigger issue on the agenda for you journalists and that’s why we don’t talk about music anymore.”

He added that he was unconcerned about the possibility of being questioned by the special counsel when he arrives on American soil.

“The purpose of my trip is my tour,” he said. “I haven’t been in the States for a year because I’ve been busy touring around Europe and Russia and it’s time to return. Even if I do get to an official invitation to comment, just like we’re doing now, there’s nothing I’m hiding.”