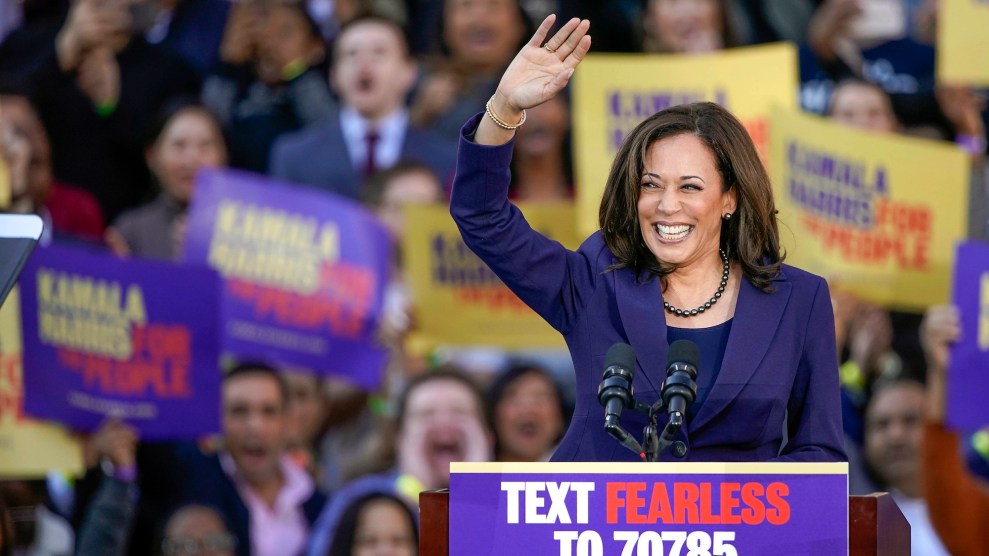 Nearly 30 years ago, only a few blocks from where she now stood in downtown Oakland on Sunday afternoon, Kamala Harris began her career as a prosecutor with these five words: “Kamala Harris for the people.” It is this ethos, Harris said in front of a crowd of thousands in her hometown, that has defined her career in both law enforcement and politics, and is the mantra of her campaign to be the next president of the United States.

Her speech was thin on specific policy ideas and mostly focused on positioning Harris as an antidote to President Donald Trump, whose administration she has gone after repeatedly during her time in the Senate. Smirking, she took shots at the president’s aspirations for a southern border wall (a “medieval vanity project”) and referenced the ongoing investigation into Russian interference in the 2016 presidential election, saying foreign powers are infecting the US government “like malware.”

But it is also her record as a prosecutor in California that has attracted criticism from Democrats who believe she wasn’t the progressive champion she now hopes to convey she is. As my colleague Jamilah King wrote after Harris announced her candidacy Monday:

Harris has long considered herself to be a “progressive prosecutor,” a notion that has gained currency in recent years as figures like Chicago State Attorney Kim Foxx and Philadelphia District Attorney Larry Krasner have promised to reform criminal justice from the inside. Harris’ argument that she was doing the same when she was prosecuting drug and sex abuse cases in Oakland 25 years ago hasn’t protected her from criticism that she was a key participant in a system that disproportionately incarcerates black and Latino men and women.

This criticism was especially pronounced during Harris’ tenure as California attorney general, when she supported laws punishing parents when their children are chronically truant. She was also hammered for prosecuting Backpage.com—some say to the detriment of sex workers—and slammed for being cautious on a host of other matters, including not prosecuting now-Treasury Secretary Steve Mnuchin for foreclosure violations stemming from his time as CEO of OneWest Bank.

But at least here on Sunday, these critiques weren’t top of mind for the massive crowd of supporters who descended on Oakland’s Frank H. Ogawa Plaza to see the candidate, who, as a black woman raised by a Jamaican-born father and an Indian immigrant mother, is only the third black woman to make a run for the presidential nomination of a major political party.

“I know people have said some things about when she was the DA, but our system is our system,” said Sonja Neely-Johnson, a 54-year-old educator who knew Harris back when the congresswoman was involved in a mentoring program at an Oakland elementary school. “Having a person of color that understands the community and the struggle when people come before her…We know the justice system is not designed to support people of color.” (Neely-Johnson and several other women attended together as members of Alpha Kappa Alpha, the historically black sorority that Harris joined during her time at Howard University.)

These women are just a fraction of the members of historically black sorority Alpha Kappa Alpha that are here (Kamala was an AKA). pic.twitter.com/0axmeUf9mK

Attendees cited Harris’ youth compared to other candidates (she’s 54), her energy, and her identity as a woman of color as reasons why they are supporting her. Simone Moody, a 43-year-old who lives in Berkeley and works at an environmental laboratory, brought her 7-year-old and 10-year-old boys to the rally to give them “an understanding of women being in charge and leading the way.”

“I feel like my generation kind of had our shot. We need the next generation to take up the mantle,” said 62-year-old Darlene Comingore of Davis, California. Comingore’s friend, 63-year-old Amy Siropian, chimed in, saying that although she was a supporter of Sen. Bernie Sanders previously, she would prefer neither he nor former Vice President Joe Biden—both men are in their 70s and considering running—join the race.