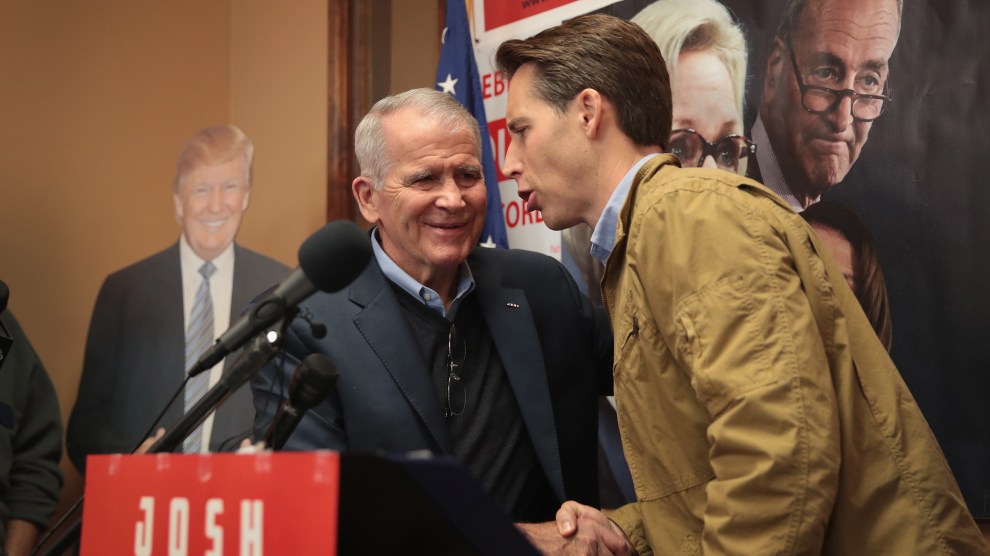 The National Rifle Association appears to have illegally coordinated its political advertising with Republican candidates in at least three recent high-profile US Senate races, according to Federal Communications Commission records. In Senate races in Missouri and Montana in 2018 and North Carolina in 2016, the gun group’s advertising blitzes on behalf of GOP candidates Josh Hawley, Matt Rosendale, and Richard Burr were authorized by the very same media consultant that the candidates themselves used—an apparent violation of laws designed to prevent independent groups from synchronizing their efforts with political campaigns.

In December, the Trace and Mother Jones reported on a similar pattern of coordination between the NRA and Donald Trump’s 2016 presidential campaign. In that case, Trump and the NRA hired affiliates of the same company—National Media Research, Planning and Placement—to direct their ad spending. Employees of that firm, operating under different corporate identities, placed ads for both Trump and the NRA on television stations across the country, with the apparent goal of reinforcing each other’s message.

Representatives of National Media, operating under the name Red Eagle Media, also bought ads on behalf of the NRA in support of some of the group’s preferred Senate candidates, and simultaneously bought ads for those Senate candidates while acting as a supposedly separate entity called American Media & Advocacy Group (AMAG). In at least 10 instances across the Missouri, Montana, and North Carolina races, FCC records show that ad purchases for both the NRA and the Senate campaigns were authorized by National Media chief financial officer Jon Ferrell.

Campaign finance laws bar outside groups from sharing any election-related information—including advertising strategy—with the candidates they support. While it is not illegal for independent groups and campaigns to use the same vendors, the Federal Election Commission requires consultants to prevent staffers from sharing information, usually through the creation of internal “firewalls.”

“All evidence points to coordination,” said Larry Noble, the general counsel of the FEC from 1987 to 2000, in response to a detailed description of the documents. “It’s hard to understand how you’d have the same person authorizing placements for the NRA and the candidate and it not be coordination.”

The NRA did not respond to a request for comment.

In the Missouri race, where state Attorney General Josh Hawley unseated Democratic incumbent Claire McCaskill, the NRA flooded local TV stations with ads supportive of Hawley in the month before the election. On the CBS affiliate KOAM, which serves the southwest part of the state, the NRA paid for almost 70 ads that aired during the first half of October.

FCC records show that those ads were purchased on the NRA’s behalf by Red Eagle Media—which, according to corporate records, is just an “assumed or fictitious name” used by National Media. The order was signed on September 7, 2018, by National Media’s Jon Ferrell. His bio on the firm’s website touts his skill at ensuring “optimal financial stewardship of campaign media budgets,” as well as making sure “every penny allocated for media is spent according to election laws.”

Just the day before, KOAM had received an order for ads from the Hawley campaign. The paperwork accompanying that order shows that the spots were purchased on Hawley’s behalf by AMAG, which has been described by its lawyer as a National Media affiliate. The paperwork is signed by Ferrell, with a handwritten addendum: “agent for Josh Hawley for Senate.”

The ads that Ferrell placed for the NRA closely align with the list of ads he authorized for the campaign. On October 5, for example, on KOAM’s morning show, an NRA ad about the Senate race ran at 6:39 a.m. and a Hawley campaign ad ran five minutes later. During Wheel of Fortune, a Hawley ad ran at 6:42 p.m. and an NRA ad supporting Hawley followed at 6:59.

A similar pattern played out in Montana, where Democratic Sen. Jon Tester beat back a challenge from state auditor Matt Rosendale despite more than $500,000 in NRA spending on Rosendale’s behalf. Records show that Ferrell signed off on a Red Eagle order for NRA ads backing Rosendale on KULR, an NBC affiliate in Billings, on September 4. One week later, on September 11, AMAG purchased a slate of ads on the same station on behalf of the Rosendale campaign. The paperwork is signed by Ferrell. As in the Missouri race, he added a handwritten addendum making clear that he was acting on the campaign’s behalf: “Jon Ferrell, agent for Matt Rosendale for Montana.” Those ads ran on many of the same shows that the NRA ads did, including airings of The Ellen DeGeneres Show.

Back in 2016, when North Carolina Republican Richard Burr prevailed against Democratic challenger Deborah Ross, Burr employed National Media outright, while the NRA used Red Eagle. As in the other races, Ferrell signed off on purchases for both sides. FCC paperwork filed by WECT, the NBC affiliate in Wilmington, shows Ferrell signing off on purchases for the Burr campaign on October 12, 24, and 27 and November 2 as an “agent for Richard Burr Committee.” At the same time, he authorized Red Eagle purchases on behalf of the NRA on September 19 and October 21.

National Media and Ferrell did not respond to requests for comment; neither did representatives for Hawley, Rosendale, and Burr. AMAG does not appear to have any employees or contacts independent of National Media.

The NRA’s use of National Media and its affiliates to coordinate with the Trump and Hawley campaigns is currently the focus of two complaints before the FEC by the Campaign Legal Center and the Giffords Law Center to Prevent Gun Violence. Although federal law prohibits such coordination, it’s rarely enforced as a practical matter. The FEC, which oversees elections, has been deadlocked along partisan lines for a decade. (FEC enforcement matters are confidential until resolved; it’s unclear if the NRA has formally responded to the complaints.)

Ann Ravel, who served on the commission from 2013 to 2017, says the straightforward manner in which the NRA and Senate campaigns aligned ads in these cases “goes to show how weak the campaign finance system is.”

“There is so much documentary evidence that it wouldn’t even require a lengthy investigation,” Ravel said. “Some cases are hard to prove, but this, on its face, is so obvious. I would not think that there is any basis for not at least investigating the matter.”

Noble agreed: “What this reflects is the FEC’s lack of enforcement and the lack of respect that the NRA and the vendor are showing toward the FEC and the law. You do this if you think no one is going to investigate.”

(Mother Jones and the Trace have teamed up to investigate the NRA’s finances and political activity. See more of our reporting here.)