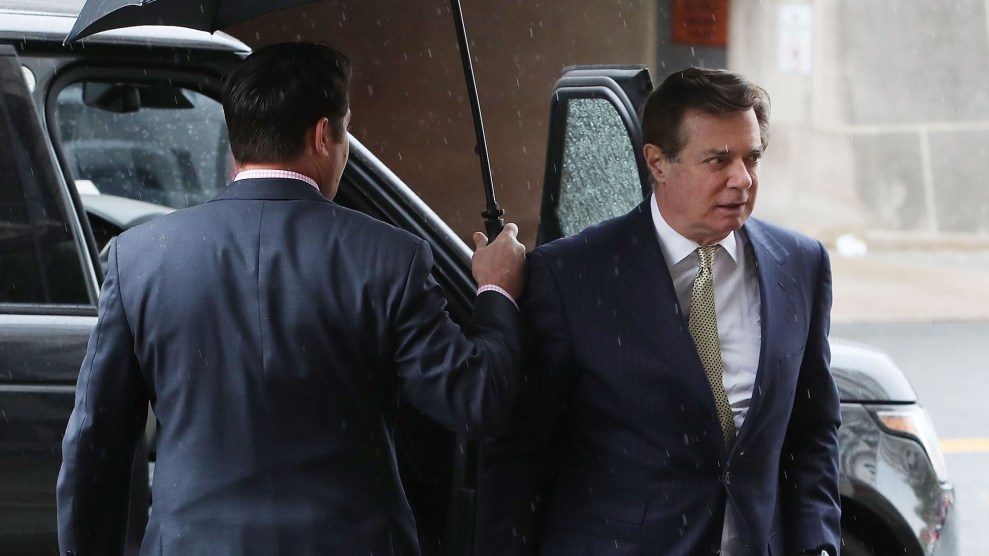 Paul Manafort arrives for a court hearing on April 19, 2018, in Washington.Mark Wilson/Getty Images

Paul Manafort dropped a bombshell on himself Tuesday.

In sections of a court filing that lawyers for the imprisoned former Trump campaign boss unsuccessfully tried to redact, Manafort’s attorneys disclosed that during the 2016 campaign, Manafort gave polling data to a former business partner who is alleged to have Russian intelligence ties, and that Manafort also discussed with that onetime associate a Ukraine peace plan that could have included ending US sanctions on Russia.

The accidental admissions came in a court filing responding to special counsel Robert Mueller’s allegation that Manafort lied to Mueller’s team about several subjects after agreeing last year to cooperate with his investigation. In sections that were redacted in the filing—yet viewable when copied and pasted into a new document—Manafort’s lawyers revealed significant new information regarding his interactions with Konstantin Kilimnik, Manafort’s former Ukrainian business partner who prosecutors have said has active ties to Russian intelligence. The disclosures shed new light on interactions between the Trump campaign and the Russian government in 2016.

In one of those sections, Manafort’s lawyers reveal that Manafort shared “polling data with Mr. Kilimnik related to the 2016 presidential campaign.”

Previous reporting disclosed that Manafort, while working for Donald Trump’s presidential bid, used Kilimnik as a go-between to offer insider briefings on the Trump campaign to Oleg Deripaska, a Russian oligarch and Putin confidant to whom Manafort owed millions of dollars. Manafort also met with Kilimnik in Manhattan on August 2016 to discuss so-far undisclosed matters that Deripaska asked Kilimnik to bring up with the Trump campaign chairman. (Manafort, Kilimnik, and Deripaska have claimed this conversation had nothing to do with Deripaska.)

Manafort’s sharing of polling data with Kilimnik suggests that his interactions with an alleged Russian intelligence contact (who apparently was in touch with Deripaska) went further than previously known. It also raises the question of why Manafort was providing polling information to Kilimnik, and whether Kilimnik was passing the data on to anyone else.

Another section in the Manafort filing that was meant to be redacted reveals that Manafort met Kilimnik in Madrid, Spain—a previously unrevealed sit-down—and allegedly lied to Mueller about the meeting. (A Manafort spokesman says this meeting occurred in early 2017.) And the filing discloses that at some point while Manafort was working for the Trump campaign, Manafort and Kilimnik “discussed or may have discussed a Ukraine peace plan.”

This, too, raises serious questions. In early 2017, Michael Cohen, then Trump’s lawyer, and Felix Sater, a Trump business associate, pushed a Kremlin-friendly peace plan for Ukraine advocated by Ukrainian lawmaker Andrii Artemenko. Under this proposal, the United States would drop sanctions it imposed on Russia after that country’s 2014 invasion of Crimea in exchange for minor Russia concessions. If Kilimnik and Manafort had discussed anything similar, it would mean that the head of Trump’s campaign was conveying to an alleged Russian intelligence associate that Trump was willing to drop sanctions against Russia—a key goal for Putin. It’s unclear from the filing when such a conversation might have happened, but the submission raises the prospect that Manafort signaled to Russia that Moscow could get a good deal out of Trump when the Kremlin was considering or mounting its attack on the 2016 US presidential election.

Manafort’s lawyers assert that Manafort merely forgot about his conversation with Kilimnik about this plan because he was too busy “managing a U.S. presidential campaign.” Mueller’s team contends that Manafort purposefully hid this from federal investigators.

The big screwup by Manafort’s legal team reveals that Mueller has unearthed hints of possibly untoward conversations between the Trump campaign and Russia. Manafort’s filing is not proof of coordination between the Trump campaign and Russia. But it strongly suggests that Manafort was game and that there’s more to the story than Mueller has so far revealed.