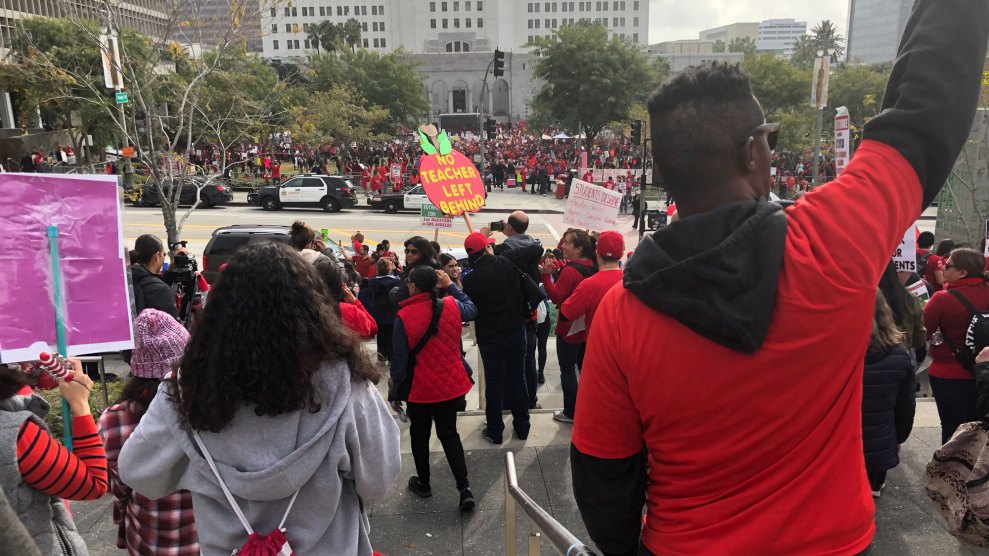 Outside Susan Miller Dorsey Senior High School in Los Angeles on Friday, students hauled their backpacks past teachers encouraging drivers to honk their horns in support.

On a muddy lawn next to a tent with a table filled with Popeyes’s Chicken for breakfast, Sharonne Hapuarachy, a longtime English teacher, shouted updates to her colleagues into a megaphone. The day before, negotiations at City Hall between the teachers’ union and the Los Angeles Unified School District lasted until midnight and would keep on throughout the weekend.

“Today is our last day to show the district that this is not dying down. We’re not going to show them that we’re getting tired,” Hapuarchy told the crowd. The group of 40 or so teachers, supporters, and even some students cheered as they prepared to make their way to Grand Park in downtown to join a rally outside City Hall.

Before Friday’s meet-up, Hapuarachy filled me in on some of the challenges Dorsey High School had faced in the last few years. Enrollment in the predominantly black and Latino school, located near Baldwin Village in south Los Angeles, had dropped from around 2,000 to 972 students in the 2017-2018 school year. In 2012, teachers and school staff faced the prospect of district reconstitution for underperforming academically, meaning they would lose their jobs and would have to reapply, along with their neighbor Crenshaw High School. Thanks to a recent $150 million settlement with the Los Angeles Unified School District, Dorsey was one of 50 schools in the district to receive additional funding support to hire teachers and support staffers over three years.

Still, charter school growth in the area had created concern in the school, with charters looking to move into empty spaces on campus. “So far, we’ve been fortunate enough to keep everybody off the campus,” she told me.

Hapuarachy turned the floor over to Jasmine Sims, a first-year STEM magnet math teacher who had only recently graduated from college. She was initially reluctant to join the strike but once she saw how many people flooded the streets of downtown Los Angeles earlier in the week, she decided to stay on board.

“These kids are suffering traumas in their lives, and who do they have to talk to?”

Sims felt fortunate that she had a relatively low class size at nearly 30, but knew her colleagues didn’t have it so well. She’s had to dip into her slim pockets to purchase materials for her students. In a way, Sims can relate to her students because not too long ago, she was in their shoes in San Bernardino.

The difference? She was in a smaller district compared to Los Angeles. “I got to take jazz and hip hop,” she says. “I was able to do those things even though I was in a similar community. We were just funded.”

At one point, Stephen Cordova, who recently joined Dorsey High as an English teacher after more than 20 years at a magnet school in Marina Del Rey, asked two students: “Are you joining us on the picket line today?”

“Nooo,” one girl in long brown and black braids told him. “Why not? You got a lot of social media to catch up on today?” he joked.

Like Sims, it is Cordova’s first year at Dorsey. He explained that one of his senior English courses had 44 kids on the roster—which really meant that 36 may show up on time, another few may be late, and others may slip out of class from time to time. He couldn’t get all the kids to stay quiet and have a conversation so he decided to split them into small groups.

He wishes Dorsey had more access to counselors and therapists. At times, he fills that role. He recalled one girl who apologized for being in a bad mood after her father was sent to prison. “These kids are suffering traumas in their lives, and who do they have to talk to?” he says, adding: “It almost becomes secondary to teaching them how to interpret literature or how to write a great sentence. It’s like, Are you okay, today? Are you feeling good?”

“This is a moment in history where you can hit the reset button. If that happens, the sky’s the limit.”

As the mostly red-clad group made their way onto the train to head to the rally downtown, Darryl McKellar waited for the last stragglers to get aboard. McKellar, who has been teaching English in Los Angeles schools for more than two decades, including three years at Dorsey, wore black leather gloves and sunglasses with a red shirt over a black hooded sweatshirt as if he came from another era.

After around 40 minutes and two trains headed to downtown, the group from Dorsey High spilled out along with the many other teachers, students, parents, and supporters for the rally near city hall. “This is a moment in history where you can hit the reset button,” McKellar says. “If that happens, the sky’s the limit.” As he rode the long escalator up from the train, McKellar raised his black-gloved fist in the air. He saw a revolution coming.