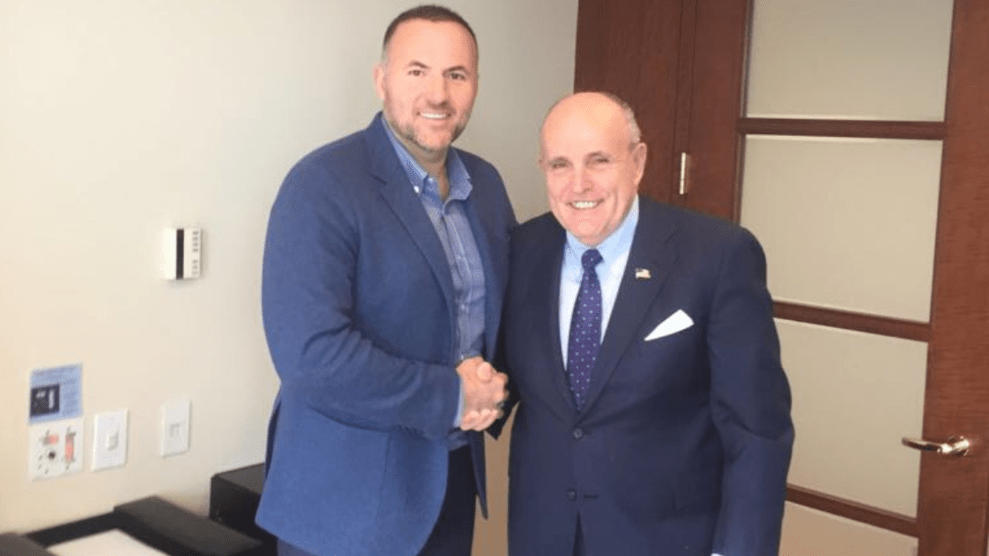 A Russian Ukrainian mogul who has drawn scrutiny from special counsel Robert Mueller has a business connection to one of the lead lawyers representing Donald Trump in the Russia investigation: former New York Mayor Rudy Giuliani.

Giuliani told Mother Jones that Pavel Fuks, an oil and real estate magnate, hired his security firm, Giuliani Security & Safety, in 2017 to advise Kharkiv, a city of 1.4 million in Ukraine. “He was [a] sponsor of a preliminary study that my firm did of security and emergency management in Kharkiv and some on advice on a planned Holocaust Memorial,” Giuliani said in a text message.

A Ukrainian magazine, Novoye Vremya, reported last year that Fuks said he retained Giuliani to “create a U.S. office for supporting investment in” Kharkiv. When asked about Fuks’ claim, Giuliani said, “I have no knowledge of that.” He said he did not do any work in the United States for Fuks or Kharkiv.

In November 2017, Giuliani traveled to Kharkiv, located near the Russian border in eastern Ukraine, in connection with the work. That year, he was also photographed with Fuks in New York. But the former mayor minimized their connection, saying that his personal involvement in the project ended in December 2017 and that his firm has no continuing relationship with Fuks.

Giuliani declined to say how much Fuks paid his firm but noted it was “well in line with similar projects all over the world.” He said his work for Fuks does not come “anywhere near a conflict” with his current work for Trump. But the connection highlights the complications caused by Giuliani’s work for international clients, among them autocrats and allegedly corrupt officials, as he represents the president.

Giuliani’s work in Ukraine is notable because Fuks and other prominent Ukrainians have recently emerged as figures in the Trump-Russia scandal. The New York Times reported last week that Fuks is among a dozen Ukrainian businessmen and political officials who attended Trump’s inauguration. During their time in Washington, DC, some of the Ukrainians arranged meetings with Republicans and Trump allies to promote peace plans regarding the Russia-Ukraine conflict that were aligned with the Kremlin’s interests.

The presence of the Ukrainians, including Fuks, at exclusive inaugural confabs has drawn Mueller’s interest. Tickets to many of these events required donations of tens of thousands of dollars to the inaugural committee, which could not legally accept foreign money. Mueller is reportedly investigating whether Americans helped Ukrainians and other foreign nationals funnel donations to the inaugural committee and to a political action committee run by Trump allies. Peter Carr, a Mueller spokesman, declined to comment.

Last August, Sam Patten, a lobbyist tied to former Trump campaign chairman Paul Manafort, pleaded guilty to arranging for a straw donor to buy inaugural event tickets using $50,000 put up by an unnamed foreigner. That person matches the description of Serhiy Lyovochkin, the onetime chief of staff to Ukraine’s former pro-Russian president Viktor Yanukovych. Lyovochkin, now a member of Ukraine’s parliament, is business partners with Dmitro Firtash, an oligarch indicted in federal court in Chicago in 2014 for allegedly paying bribes to officials in India. Firtash has since battled US government efforts to extradite him from his adopted home of Austria. The Justice Department claims that Firtash, who has denied wrongdoing, is an “upper-echelon [associate] of Russian organized crime.”

Born in Kharkiv, Fuks reportedly got rich in Moscow in the 2000s through investments in real estate, energy, and banking. Fuks has said that he negotiated with the Trump Organization between 2004 and 2010 to use the Trump brand on a Moscow tower he owned. Fuks told Talking Points Memo that he met with Trump in New York City in 2006 and in Palm Beach in 2008 to discuss the venture, which never went forward. He has also claimed to have a relationship with Donald Trump Jr.

Since 2015, Fuks has operated in Ukraine, investing in gas, real estate, and other ventures. He has built ties to Ukrainian politicians, including Kharkiv Mayor Hennadiy Kernes, a prominent former member of Yanukovych’s party. In 2014, Kernes was shot by a sniper while bicycling, leaving him partly paralyzed. Giuliani said in a text that he was “very impressed with Mayor [Kernes] who was crippled during the Russian invasion and fought them off.” Public reports on the shooting differ substantially from Giuliani’s account. In 2015, Kernes was charged along with some of his bodyguards with kidnapping, torturing, and threatening to murder two anti-Yanukovych activists. The charges were thrown out last fall, after prosecutors reportedly failed to show up to hearings.

Al Jazeera reported last year that Fuks was questioned by Ukrainian authorities about a complex scheme to obtain $160 million of assets allegedly stolen from the country by Yanukovych, who was forced out of power and fled the country in 2014. Yanukovych had employed Manafort as a lobbyist and adviser. The former Trump campaign chairman is currently imprisoned and awaiting sentencing for tax evasion, money laundering, and other crimes, many of which involve his efforts to hide millions of dollars in payments he received from Yanukovych and his allies.

Giuliani’s foreign consulting work has recently drawn scrutiny. In recent years, he has represented Qatar and a Turkish gold trader prosecuted in federal court for violating US sanctions on Iran, a case that drew personal attention from Turkey’s autocratic president Recep Erdogan. Last summer, Giuliani sent a letter to Romania’s president attacking an anti-corruption campaign there. He later acknowledged he was paid to send the missive by a firm run by former FBI Director Louis Freeh, who represents one or more wealthy Romanians investigated under the campaign. His letter drew a rebuke from the State Department, which noted that the former mayor’s statements contradicted US policy. In October, Giuliani attended a technology conference in Armenia where he appeared on a panel with a Russian currently on the US sanctions list. TriGlobal Strategic Ventures, a New York-based firm that has advised Russian oligarchs and others with Kremlin ties, arranged that trip. The firm also boasts that it “facilitated [the] introduction between the City of Kharkiv and Giuliani Security & Safety.” Its president, Vitaly Pruss, says in an online biography that he “worked closely with Giuliani Partners” from 2008 to 2011. A man who answered the phone at TriGlobal’s office hung up when contacted by Mother Jones.

In September, seven Senate Democrats asked the Justice Department to investigate whether Giuliani violated the Foreign Agents Registration Act by lobbying for foreign interests without registering with the US government. Giuliani has never registered with the Justice Department as a lobbyist or a foreign agent. He says he does not need to because he only provides advice and does not lobby for his clients.

But critics, including these Senate Democrats, say that Giuliani’s access to Trump and other top US officials would make it easy for him to privately push for US policy to reflect his clients’ interests. “Mr. Giuliani communicates in private with the President and his senior staff on a regular basis,” the senators wrote. “Without further review, it is impossible to know whether Mr. Giuliani is lobbying U.S. government officials on behalf of his foreign clients.”

Giuliani told Mother Jones that his work in Ukraine, “like all the work I do, had nothing to do with representing them before any part of the US government. All of it was for the internal benefit of the City of Kharkiv. At the time we started and completed it, I had no idea I would be representing the President.”