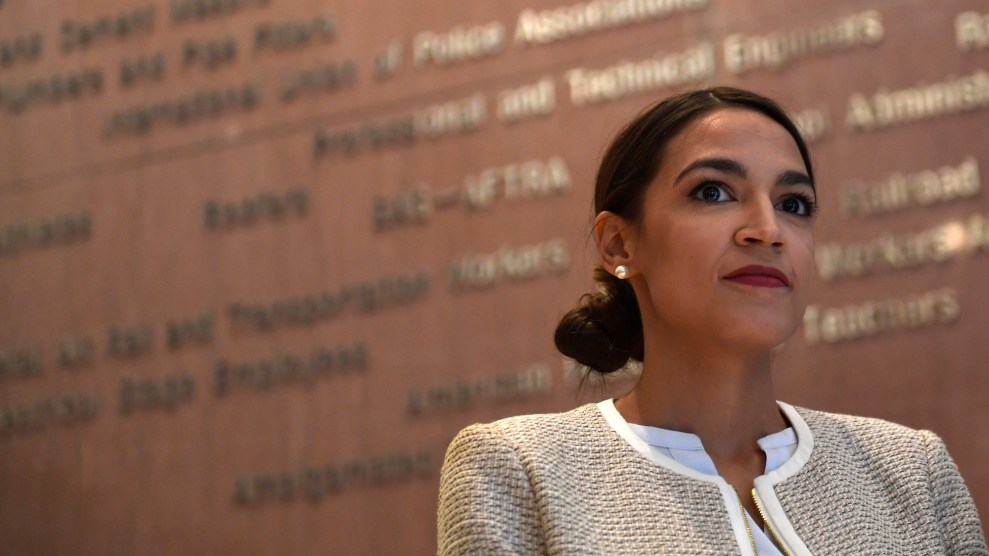 Rep. Alexandria Ocasio-Cortez (D-N.Y.) at a news conference with members of the Progressive Caucus in Washington on Monday, Nov. 12, 2018.Susan Walsh/AP

Visitors to New York’s Times Square saw a new billboard earlier this week that spelled out the jobs, wages, and economic activity New York potentially lost due to the Amazon pullout. “Thanks for Nothing, AOC,” it concluded, referring to the popular new congresswoman from Queens, Rep. Alexandria Ocasio-Cortez (D-NY). The billboard identified its sponsors as the Job Creators Network, a conservative advocacy group led by the CEOs of some of the country’s largest retailers.

They are blaming her for the reversal of Amazon’s decision to open its proposed new headquarters in New York and have plastered a number of different billboards all over the city saying as much. With her fearless social media savvy and capacity to take on opponents, Ocasio-Cortez responded—and launched a back-and-forth between the congresswoman and the conservative group that’s resulted in even more AOC-inspired billboards.

When the first billboard appeared, Ocasio-Cortez quickly clapped back, noting that the expensive stunt helped to prove the point of her Amazon opposition.

Few things effectively communicate the power we’ve built in fighting dark money & anti-worker policies like billionaire-funded groups blowing tons of cash on wack billboards (this one is funded by the Mercers).

It turns out, a main funder of the Job Creators Network is the Mercer family, GOP megadonors who have doled out millions of dollars to conservative causes. A second tweet drew attention to the Job Creators Networks’ Wikipedia entry, highlighting the Mercer’s role in the organization and the fact that the right-wing conservative website Breitbart had promoted its work.

But that wasn’t the end of it.

On Friday, JCN put up two more billboards, mocking the critiques laid out in Ocasio-Cortez’s response. One, borrowing the congresswoman’s own adjective, read, “Hey AOC, saw your wack tweet”. The other takes aim at her “tons of cash” comment. “Hey AOC, this billboard cost about $4,000. But you cost NY 25,000 jobs and $4,000,000,000 in annual lost wages,” it reads. “Ouch!”

As JCN escalated its efforts, so did she, grabbing the opportunity to draw attention to economic inequality. On Saturday she responded to the latest stunt by tweeting about the Mercers’ tax havens that had been discovered in the Panama Papers, a trove of more than 11 million leaked financial documents detailing the offshore entities the world’s wealthiest individuals had used to avoid taxation.

Do you think the Mercers will eventually fund 8 JCN billboards, one for each of the 8 Bermuda offshore tax avoidance vehicles they’ve been linked to in the Paradise Papers?https://t.co/nm2nrgVW51 https://t.co/euD9L7pk2b

Ocasio-Cortez also noted that the billboards’ placement in Times Square, the most tourist-ridden area of New York, has nothing to do with the interest of the New Yorkers she represents. Quoting a tweet that noted how “Times Square isn’t really NYC,” the congresswoman compared the stunt to an “obscenely rich version” of the scene in The Office when Michael Scott, the show’s clueless manager, calls Times Squares’ Bubba Gump restaurant, a tourist trap, “the heart of civilization.”

Billionaires paying to put up anti-progressive propaganda in Times Square is like the obscenely rich version of the scene where Michael Scott points to the Bubba Gump and saying “This is it, this is the heart of civilization, right here.” 😂 https://t.co/NJXggcSZJv