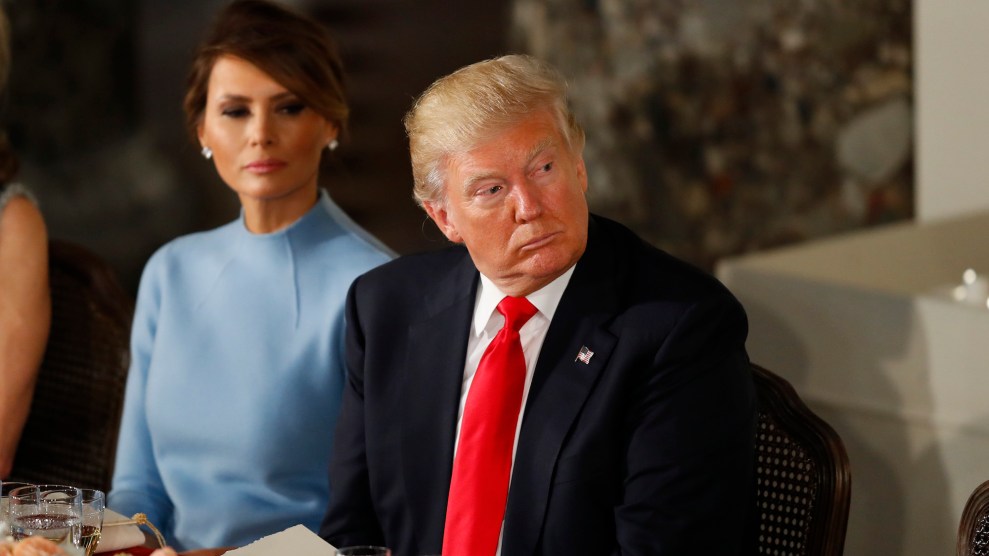 On December 11, 2016, Ahmed al-Rumaihi, then the head of a branch of Qatar’s $320 billion sovereign wealth fund, dined with President Donald Trump’s longtime personal lawyer, Michael Cohen, at Manhattan’s Peninsula Hotel on Fifth Avenue. The men discussed possible investments by the Qatari fund in public-private partnerships that the incoming Trump administration hoped to establish to bankroll infrastructure projects—and, Al-Rumaihi later claimed, Cohen requested a $1 million fee for linking the Qataris with US investment partners. Also present at the dinner, according to a spokeswoman for Al-Rumaihi, was Imaad Zuberi, a Pakistani American businessman who has come under scrutiny by federal prosecutors probing donations to Trump’s inaugural committee.

On Monday, Zuberi was named in a subpoena sent by the Manhattan US Attorney’s Office to the inaugural committee, to which Zuberi donated $900,000 in late 2016. The subpoena seeks documents related to communications with Zuberi’s Los Angeles-based private equity firm, Avenue Ventures, according to several reports. The move suggests that prosecutors are looking into whether the committee received illegal foreign donations, potentially made by Americans acting as straw donors to mask foreign money.

“He was a huge donor for Hillary, but then Trump won, so he was sucking up to Trump,” says one person who spoke to Zuberi. “He didn’t want to be shut out.”

Through a spokesman, Zuberi said he did not recall attending a meeting with Cohen and al-Rumaihi. Still, the episode is one of a series during the presidential transition in which Zuberi was involved in efforts by Qatari officials to contact top Trump advisers. The Qatari outreach was part of an influence campaign targeting the Trump administration as the Gulf state sought to convince the US government to back it in a diplomatic feud with regional rivals, including Saudi Arabia and the United Arab Emirates.

Zuberi says he has not heard from prosecutors and is unclear on why they have taken an interest in him. “He has never been contacted by the special counsel’s office or by any US attorney’s office and has no knowledge of any of them having ever inquired about him,” says Steve Rabinowitz, a Zuberi spokesman. Rabinowitz says Zuberi contributed his own money to Trump’s inaugural committee and did not donate on behalf of any foreign person or organization, which would be illegal.

Zuberi has explained his nearly $1 million donation to Trump’s inaugural committee as an effort to curry favor with the Trump administration. Zuberi says he does not do business with the US government but considers donations a means to develop ties that might prove useful for his business. “To open doors, I have to donate,” Zuberi told the New York Times on Tuesday. “It’s just a fact of life.” He told Mother Jones last year that his business focuses on seeking investment capital from sovereign wealth funds, including Qatar’s, for real estate and infrastructure projects around the world. A longtime Democratic donor who supported Hillary Clinton in the 2016 election, he acknowledges that he pursued Trump administration contacts with his checkbook immediately after the election.

According to Rabinowitz, Zuberi denies seeking to influence US policy on behalf of Qatar or any other state. Yet in 2014 he registered under the Foreign Agents Registration Act as an adviser to the government of Sri Lanka on matters that included influencing the US government. Zuberi and a company he co-owned were paid $6.5 million for this work, Foreign Policy reported.

Zuberi is not accused of any crime. But his own explanation of attempting to purchase access to the Trump administration places him in the midst of an extraordinary and unseemly scramble by well-heeled interest groups, including foreign governments, seeking presidential favor in the months following Trump’s election.

According to Rabinowitz, Zuberi had three conversations with Cohen during the transition related to Zuberi’s desire for access to Trump and other top officials at the inauguration. At the time, Cohen, trading on his access to Trump, was pitching his services as a lobbyist to domestic and foreign companies. Zuberi says he did not offer to pay Cohen, though in one of those conversations, Cohen expressed interest in working as a lawyer on New York real estate deals that Zuberi hoped to invest in, Rabinowitz says. In 2018, Zuberi discussed doing business with Elliott Broidy, formerly a leading GOP fundraiser, according to two Zuberi associates. Last year, a hack of Broidy’s email exposed what appeared to be his efforts to secure large payments from foreign governments seeking his help influencing the Trump administration.

Zuberi has long been a prolific Democratic donor. According to one associate, the businessman is “starstruck” by famous politicians. He has a history of social-media posts showing him with powerful lawmakers including former President Barack Obama, former Vice President Joe Biden, and Clinton. In 2016, Zuberi gave $615,000 to support Clinton’s campaign and raised an additional $270,000 from other donors, according to Democratic emails published by WikiLeaks. People who have talked to Zuberi depict his large contributions to Trump as part of a last-minute effort to quickly build GOP ties he lacked due to his past Democratic support. “He was a huge donor for Hillary, but then Trump won, so he was sucking up to Trump,” says one person who spoke to Zuberi. “He didn’t want to be shut out.”

Donald J Trump won in fair election. Now everyone needs to fall in line behind the President-Elect. Country First! https://t.co/KOV4wvDMCO

Immediately after the election, Zuberi began making big contributions to Trump and other GOP causes, though he also continued giving to some Democrats. On November 15, 2016, he gave $33,400 to the National Republican Congressional Committee, the House GOP’s campaign arm, according to Federal Election Commission records. On November 21, he gave $5,000 to the political action committee of California GOP Rep. Ed Royce, then the chair of the House Foreign Affairs Committee.

Zuberi has allegedly used his largesse to help Qatar. Al-Rumaihi claims that Zuberi gave him a ticket to a $5,000-a-plate breakfast fundraiser held on December 7, 2016, at a Manhattan restaurant to support the Trump transition. Al-Rumaihi told the Intercept last year that he met Cohen at that event and won his attention by citing Qatar’s plans to invest in billions of dollars in public-private partnerships funding infrastructure in the United States. Five days later, according to al-Rumaihi, he and Zuberi met Cohen for dinner at the Peninsula Hotel.

Last year, Cohen, who has since pleaded guilty to lying to Congress and campaign finance violations, denied that he asked al-Rumaihi for money. Zuberi declined to speak with Mother Jones this week. But through Rabinowitz, he said he has no recollection of giving al-Rumaihi a ticket to the fundraiser.

Zuberi does acknowledge that on December 12, 2016, the day after the Peninsula Hotel meeting, he accompanied a delegation of Qataris including al-Rumaihi to Trump Tower, where the Qatari officials met with Michael Flynn, Trump’s incoming national security adviser, and Steve Bannon, Trump’s chief strategist. “He had been meeting with Qataris with whom he does business,” Rabinowitz says. “They had a meeting at Trump Tower. They said, ‘Why don’t you walk over with us?'”

Zuberi did not join the meeting but met Flynn in an elevator and subsequently posted a selfie with the retired general on his Facebook page, according to Rabinowitz and media reports.

Zuberi was also listed as an attendee at a Trump inaugural breakfast event on January 18, 2017, that included Flynn and Rep. Devin Nunes (R-Calif.), then head of the House intelligence committee and a member of the Trump transition team, and foreign officials from Qatar, Saudi Arabia, United Arab Emirates, Israel, and elsewhere, according to the Daily Beast. The publication reported that Mueller and federal prosecutors in New York have sought information on the event. Rabinowitz says Zuberi did not go to the breakfast but showed up as it was ending to talk to people who had attended.

The Washington Post reported Wednesday that in 2017, Zuberi asked the top Democrat on the House Foreign Affairs Committee, Rep. Eliot Engel (D-N.Y.), to whom Zuberi has contributed, to meet with Qatar’s foreign minister, an ask that came at the same time the Qatari Embassy in Washington made a similar request.

Rabinowitz says Zuberi is “bewildered” that his activity during the transition has drawn scrutiny. “He doesn’t know why his name is on that subpoena.”