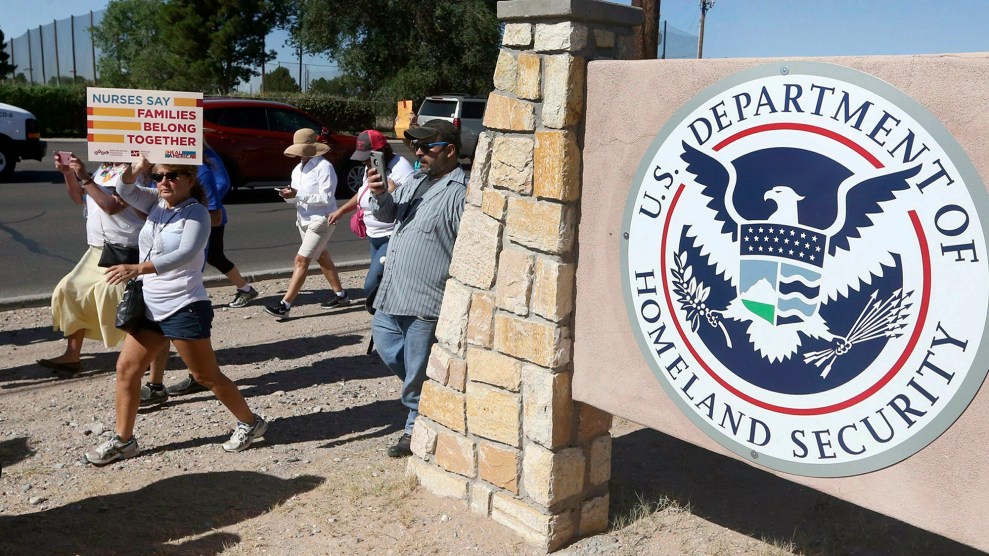 Last year, a group of Sikh men from the Indian state of Punjab arrived in the United States, many of them fleeing religious and political persecution. They requested asylum and were sent to the El Paso Processing Center in Texas. For more than 40 days now, nine of those men have been on a hunger strike while the courts slowly consider their cases. Then this week, staffers at the center attempted to force-feed the men, but they resisted and were threatened with immediate deportation—even though their attorney says they are too frail to travel and the courts are not finished with their cases.

A federal judge first authorized the force-feeding in mid-January, two weeks after some of the asylum-seekers stopped taking their meals. One of them, a 22-year-old who has lost 50 pounds on the strike, told the Associated Press about being pulled from his cell multiple times each day for the force-feeding. “They tie us on the force-feeding bed, and then they put a lot of liquid into the tubes, and the pressure is immense so we end up vomiting it out,” he said in early February. “We can’t talk properly, and we can’t breathe properly. The pipe is not an easy process, but they try to push it down our noses and throats.”

“We can’t talk properly, and we can’t breathe properly. The pipe is not an easy process, but they try to push it down our noses and throats.”

Things escalated on Thursday, as the men resisted when officials allegedly attempted to put the tubes down their nostrils without allowing them to lie down first, according to Lakshmi Sridaran of the advocacy group South Asian Americans Leading Together, which is monitoring the situation there. “From what I understand there was almost an altercation between the medical staff and the detainees, initiated by the medical staff,” she says. One of the men then called attorney Ruby Kaur, who is representing two in the group and had visited the facility earlier that day. Kaur says that in a quick conversation, her client told her that because they had taken the tubes out of their noses, ICE officials were there to bring them to isolation units. When she tried to see the men on Friday, Kaur says, officials informed her they were not in their normal barracks.

Kaur also claims ICE officials told the men earlier this week that they would be deported Friday morning, a threat she says was repeated again after the Thursday confrontation. She says the men were examined by a doctor, who cleared them for travel to India. Kaur disagreed that they were in any condition to fly: “They are experiencing rectal bleeding, nasal bleeding, wounds in their throats; they cannot talk, they feel weak, and they are really stressed out and depressed,” she notes, adding that many of them have lost 40 or 50 pounds, have scars on their arms from the IVs, and have experienced blood in their vomit.

On Thursday, Kaur says, ICE notified US Rep. Veronica Escobar, a Democrat from El Paso, that the men would not in fact be deported because of the health risks of travel. But since then, the attorney says, officials at the facility have continued to threaten their removal from the country, even allegedly going as far as taking some of the men to change their clothing for the trip.

Amrit Singh, the uncle of two of the asylum-seekers, says that when he tried to add money to their commissary accounts this week, the money was returned, according to Kaur. Other relatives of the detainees have reported a similar problem. That raises concerns among advocacy groups because ICE regularly shuts off detainees’ phone accounts before deportation, Sridaran says.

As of Saturday, they were still detained in El Paso, Kaur says. ICE did not respond to a question about whether it had threatened them with deportation.

Judges in the past have allowed ICE to force-feed detainees on hunger strike, though the International Committee of the Red Cross and the American Medical Association have expressed ethical concerns about the practice. A spokesman for the United Nations human rights office said Thursday the treatment of the asylum-seekers in El Paso could violate the UN Convention Against Torture.

The treatment of the asylum-seekers in El Paso could violate the UN Convention Against Torture.

In a statement, ICE confirmed nine men at the facility were on hunger strike and said medical staffers continue to offer them the option of voluntarily drinking their meal supplements during each meal time. The agency denied it had retaliated against them or put them in isolation. “ICE does not operate ‘solitary confinement’ in its detention facilities,” agency spokeswoman Leticia Zamarripa said. “When necessary, ICE segregates individual ICE detainees in its Special Management Units, which have not been used in the case of the El Paso hunger strikers. The nine individual hunger strikers remain in their barracks area within the El Paso Service Processing Center facility and have access to recreational areas.”

This isn’t the first time South Asians have gone on hunger strike at the El Paso facility. In 2014, a group of 37 Sikh Indian men stopped eating to protest their detention. The next year, more than 50 Bangladeshi, Pakistani, and Afghan asylum-seekers did the same and reportedly ended up in isolation. Many of those detainees were deported to Bangladesh, where some of them were killed after their arrival, claims Sridaran, citing a New York-based group called DRUM that was in touch with their family members. DRUM did not reply to a request for comment.

One reason for these protests is that South Asians are denied bond hearings at higher rates than other asylum-seekers, according to Sridaran. In 2016, BuzzFeed obtained documents in a Freedom of Information Act request that highlighted this trend: The documents showed that 83 percent of Indians facing deportation from the country were incarcerated in 2013—a rate much greater than for people from other countries, including Mexico. “Because they are languishing in the facility for months at a time, and in some previous cases for more than a year, they will launch a hunger strike to draw attention to their situation,” Sridaran says, noting that many of them have been denied language interpreters and religious accommodations during their detention.

Outside Texas, four immigration detainees are on hunger strike at facilities in or near Miami, Phoenix, San Diego, and San Francisco, an agency spokeswoman confirmed to the Associated Press in late January. Since May 2015, nearly 1,400 people have gone on hunger strike at 18 immigrant detention facilities, according to the advocacy group Freedom for Immigrants.

Still, ICE told the Associated Press that hunger strikes were not common and that force-feeding was “exceedingly rare.” In the past, immigrant detainees have been force-fed at least six times in Washington state, according to the news wire, and also in Florida, though a federal judge in 2017 prohibited the agency from force-feeding an immigrant at a facility in Arizona. The force-feeding of detainees at Guantanamo Bay in 2006 led to international condemnation.

Since May 2015, nearly 1,400 people have gone on hunger strike at 18 immigrant detention facilities.

Advocates connected to the El Paso case say they have not been able to access the federal judge’s January order to determine why he authorized the force-feeding of the nine Indian asylum-seekers. Immigration and Customs Enforcement says it seeks these court orders when doctors determine force-feeding is necessary to protect a person’s life.

“ICE does not retaliate in any way against hunger strikers. ICE explains the negative health effects of not eating to our detainees,” the agency told the Associated Press. “For their health and safety, ICE closely monitors the food and water intake of those detainees identified as being on a hunger strike.”

Rep. Escobar, who visited the facility after the hunger strike began, described the force-feeding as a “cruel and inhumane practice.” She said some of the hunger strikers had been detained for 15 to 18 months. “This [is] unacceptable,” she tweeted after her visit. “El Paso and our country are better than this.”