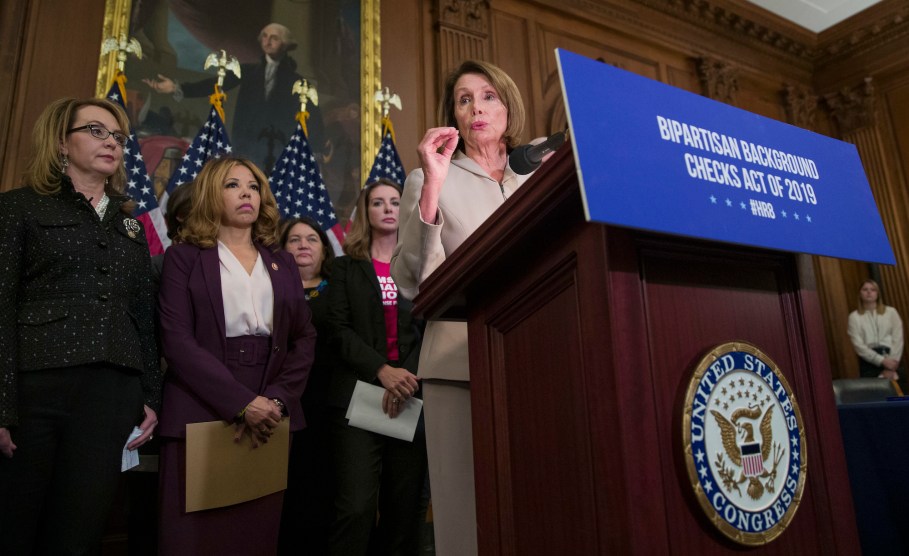 House Speaker Nancy Pelosi (D-Calif.) speaks at a press conference to announce the introduction of legislation to expand background checks for all gun sales on January 8, 2019.Alex Brandon/AP

The House of Representatives will vote on two gun control bills this week that seek to close loopholes that exist in the federal background check system.

One measure from Rep. Mike Thompson (D-Calif.) would require a background check for every gun sale—a condition that doesn’t currently apply to private gun transfers, such as those at gun shows or between acquaintances. The other, introduced by House Majority Whip Jim Clyburn (D-S.C.), would close another loophole that automatically allows a firearm purchase to be completed if the FBI fails to produce the results of its background check within three business days.

The votes are the first of their kind to take place in the House since 2007, when lawmakers passed legislation that addressed major gaps in the federal background check system after the 2006 massacre at Virginia Tech left 32 dead. Since then, Democrats’ efforts to pass gun control legislation have largely been stymied by their Republican counterparts, who consider themselves deeply aligned with the National Rifle Association and have rejected any effort to expand federal gun regulations.

These measures have been a priority for Democrats since they assumed control of the House earlier this year. House Dems owe their majority at least in part to an energized gun violence prevention movement that coalesced in the wake of the 2018 school shooting in Parkland, Florida, that left 17 dead and 17 others injured. After the midterms, gun reform activists presented reform wish lists they hoped Democrats would take up in the next Congress: In addition to expanding background checks, advocates wanted to see the new majority take up so-called red flag laws designed to keep firearms out of the hands of people who pose a danger to themselves or others, disarm domestic abusers, and allocate funding for the Centers for Disease Control and Prevention to study gun violence as a public health issue.

Though Wednesday’s bills are widely expected to pass the Democrat-controlled House, no one expects the bills will actually become law. Senate Majority Leader Mitch McConnell (R-Ky.) has refused to hold a vote on any gun-related measures, and the Trump White House has firmly opposed most gun control legislation. Still, Democratic lawmakers leading the effort and their gun reform allies told Mother Jones that Wednesday’s votes are the culmination of a political strategy they’ve spent the better part of the last year preparing. When House members vote on the two measures Wednesday, each of them contained within their own narrowly defined bill, they’ll have a record to illustrate where Republican lawmakers stand on the most popular gun reform measures, creating a political tool that advocates can use to force the issue in the 2020 elections and build on a strategy method that proved somewhat effective during the midterms.

The point is to get House members on the record for their votes, which hasn’t happened in that chamber of Congress since the 2012 Sandy Hook massacre that brought a new urgency to the gun reform movement. Doing so creates an important opportunity to see where lawmakers stand. “We’ve never had a vote in the House solely on universal background checks,” says Chelsea Parsons, the vice president for Gun Violence Prevention at the Center for American Progress. “It’s important to have that vote now to put pressure on Republicans who have been dodging the issue. That way, constituents have a really clear sense as to where they stand on this issue. That’s why you want to keep this bill and this vote on its own.”

The point of keeping the bills as distinct, specific entities is to eliminate any extraneous measures that could give conservative lawmakers a reason to vote “no” on the bills. Lawmakers learned their lesson in 2013, when the Manchin-Toomey amendment failed to pass the Senate after the Sandy Hook shooting; some cite its attempt to expand background checks, improve the existing background check system, and institute a federal commission to study mass violence all at once as part of the reason for its failure. “That bill was built in order to attract the most bipartisan support, but it was never the cleanest, strongest policy,” says Robin Lloyd, the director of government affairs at Giffords, who works with federal lawmakers on their gun policies. “It was built with compromise in mind and it still didn’t attract enough support to pass.”

The decision to take up background checks first is a practical consideration. Advocates say closing these loopholes—which studies have linked to decreased rates of firearm-related homicide and suicide—are foundational to improving gun safety. “Unless we close the background check loophole first, dating partners, stalkers, or someone subject to an [Extreme Risk Protection Order] will still be able to get a gun,” Lloyd says. “Sequencing is important and by design.”

Background checks as a form of gun control is also strikingly popular: Polls consistently find that more than 90 percent of voters support it, a result that hit a high-water mark of 97 percent after the Parkland shooting. Researchers say implementing them could also be greatly effective. According to a 2017 study in the Annals of Internal Medicine, which was partly funded by gun control advocates, 22 percent of US gun owners obtained a firearm without a background check over the past two years. Meanwhile, the FBI found that in 2016 more than 4,000 people who should have otherwise been banned from owning a firearm were able to do so thanks to the “delayed denial” loophole that Rep. Clyburn’s bill seeks to address.

Many Democrats flipped House seats by running on this issue, and incoming freshmen sent a letter to House leadership as they took office asking for the opportunity to make good on their campaign promises. And five Republicans have agreed to co-sponsor Rep. Thompson’s bill, signaling a potential opening with the party that’s been moving in lockstep with the legislative priorities of the NRA.

“Universal background checks is the policy proposal that both addresses a significant gap in the law and has really strong bipartisan support,” explains Parsons. “You start with that to address a problem, but to also demonstrate that gun safety is a bipartisan issue.”

There have been signs that some Republicans are feeling the pressure from Democrats. In addition to the five GOP lawmakers who are backing Thompson’s bill, activists began reaching out to Republican offices soon after the election and were encouraged to see that offices that had never previously returned their calls or emails agreed to take meetings on the bill. They tell Mother Jones that they hope to pick up at least a few more Republicans along the way, but they’re not sure what to expect given that the House hasn’t voted on these kinds of measures in more than a decade.

And if Republicans reject the measure, Democratic lawmakers say they are ready to hold their colleagues accountable. Thompson tells Mother Jones he expects an on-the-record vote could have real consequences. “They’re going to have to go home and explain to their constituents why they would vote against a program that is designed to keep guns away from people who are a danger to themselves or others,” Thompson says.

Sen. Chris Murphy, one of Capitol Hill’s most vocal proponents of gun reform, agrees with Thompson’s summation. During the 2018 midterms, he orchestrated an electoral strategy around gun reform that helped to successfully oust eight NRA-aligned lawmakers from office. Even though getting Senate leadership to hold a vote might be a lost cause, Murphy is already looking ahead to how the 2020 elections will affect the Senate; he says he plans to “train the focus” of those efforts on his GOP colleagues facing tough reelections.

“It becomes a more finely tuned operation when you turn it onto a dozen senators,” Murphy tells Mother Jones. “We have our work cut out for us in terms of making inaction as uncomfortable as possible.”

But on the whole, little suggests the movement has changed the minds of most GOP lawmakers. On Monday evening, the White House issued a statement warning that President Donald Trump would veto both bills in the unlikely event they cross his desk—even though he repeatedly tweeted his support of “strengthening,” “very strong improvement,” or “comprehensive” background checks in the days following the Parkland massacre. The Republican base seems to agree with him: Later this week, its loyalists will convene at the annual Conservative Political Action Conference, which will host at least five events related to gun rights—including one dedicated to dismantling the left’s views on gun control.