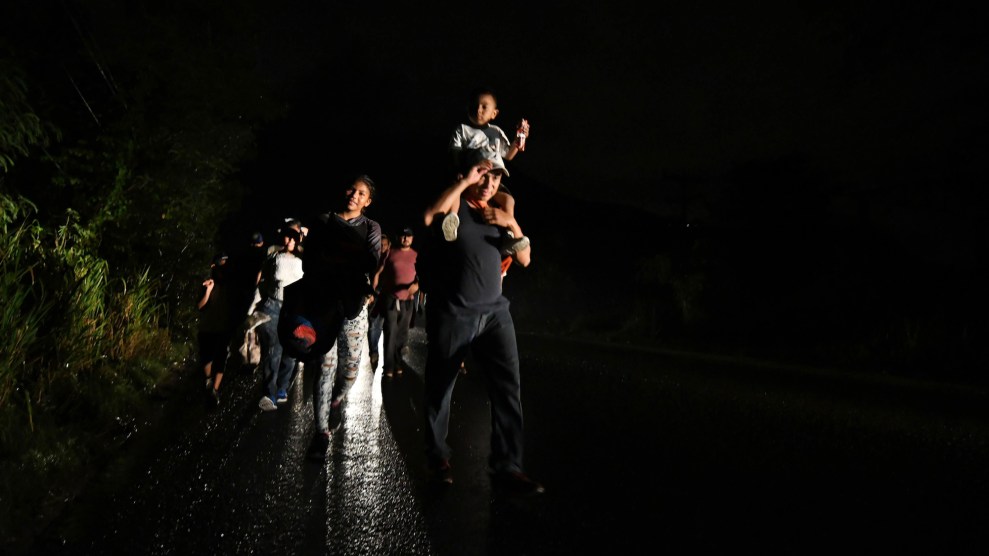 A man carries a child on his shoulders as part of a migrant caravan to the United States. Orlando Sierra/AFP/Getty Images

An excerpt of this story appears here; it was co-published in full by ProPublica and Guernica.

The first stories we can correct are the ones we tell ourselves. My story, the one I have hung onto since I was a little girl, is that I got lucky. Luck made sense because luck can happen to anyone. Even me. Luck fit into the parts of my story I wasn’t ready to explain, the parts that I surrendered to half-memories. I made it to this country because of luck. I grew up a janitor but then my parents got lucky and bought the business and I ended up a journalist. My citizenship came after I was undocumented for almost a decade, when I got lucky.

What I ignored in my memories, what luck papered over, found its way back. The gaps in my story came looking for me, making themselves known. And when they did, I began to tell the story on my body. My tattoos, inked over the past sixteen years, were supposed to be disparate, pieces of memory that would not speak to each other. But that’s not how tattoos work.

My younger brother, Beto, a tattoo artist, who inked most of them, calls tattoos “art wounds.”

“Tattoos are the art of pain in exchange for meaning,” Beto told me. “Tattoos start as open wounds that heal to reveal permanence. Growth requires healing, the only other person we let us cut open to bleed, to fix something, to live, is a doctor.” My tattoos now tell my story in a way that I couldn’t capture in words.

On my left arm is a garbage can with a few peonies and a calla lily tossed inside. When I shut my eyes and think about my childhood, I see my mother pushing a loud, circular, plastic, gray trash can on wheels. Our family business took on anything. From factories to the YMCA, churches to strip-mall office spaces—you name it, my parents were up for cleaning it. I grew up chasing behind my mother and that garbage can.

Owning a business was never in the plan. My parents were young immigrants raising a family in the early 1990s just outside of Chicago. When my dad’s boss was ready to move on, he offered them a chance to take over the business on a generous payment plan. They took a gamble and the janitors became business owners. I was 6 and my brother was 2.

From then on, janitorial work was always a part of our family life. Of all the places my parents cleaned, our local public library was my favorite. An empty public library is nothing short of magical. For twelve years, my brother and I ran and played in that huge sprawling space. We learned every room and the meticulous organization of each department. Our favorite game, in between cleaning, was jumping out of the stacks to scare the other. The scares almost always turned into small brawls on the carpet floors. Mom or Dad would eventually come untangle our fights. As I got older, this access made me feel lucky because I had a superpower—to read as much as I wanted while my parents cleaned. A sort of trade for the time they spent there, scrubbing.

My parents did their best to make sure their children didn’t deal with shit.

On many nights at that library, I would find my mother bent over in a toilet stall. “No te metas, esperame me tantito,” (“Don’t come in, wait just a sec,”) my mother told me as as she worked through a clogged toilet. She arched her back even higher, as if to use her body to shield me from the shit.

My parents did their best to make sure their children didn’t deal with shit, or even see it. But the job came with a kind of crap they could not protect us from.

By 10 or 11 years old, I had become fluent in English and office people began to talk to me first when they wanted to give anyone in my family instructions. Their question followed a sort of dance. First, the slight bend in the knees. Then, the head tilt as if they were going to get closer but, of course, they never did. Their mouth opened and the syllables suddenly seemed so marked to pronounce whatever pile of mess they left behind. A mess demanding urgency and our undivided attention.

With English, I learned the steps to that dance, learned to recognize the sinking feeling of getting talked down to and the unspoken trade of our humanity. We were there to perform a very specific labor and nothing else. I replied in the crispest English the rhythm of my tongue could kick back, a deliberate correct annunciation of “That sounds very good, I understand, I will make sure my parents know. Thank you.”

My words were meant to correct the story they told themselves about me and my family. I wanted them to know that I got good grades, that I never missed a day of school. They didn’t know, but should have, that my dad read a lot. And that I was probably friends with their kids at school.

The flowers inside the garbage can on my arm are reminder of the good that came with that shit. We, as family, got so much from their trash. I never wanted to forget that I was the janitor’s kid before I was anything else.

Read the rest of this essay at Guernica.com.