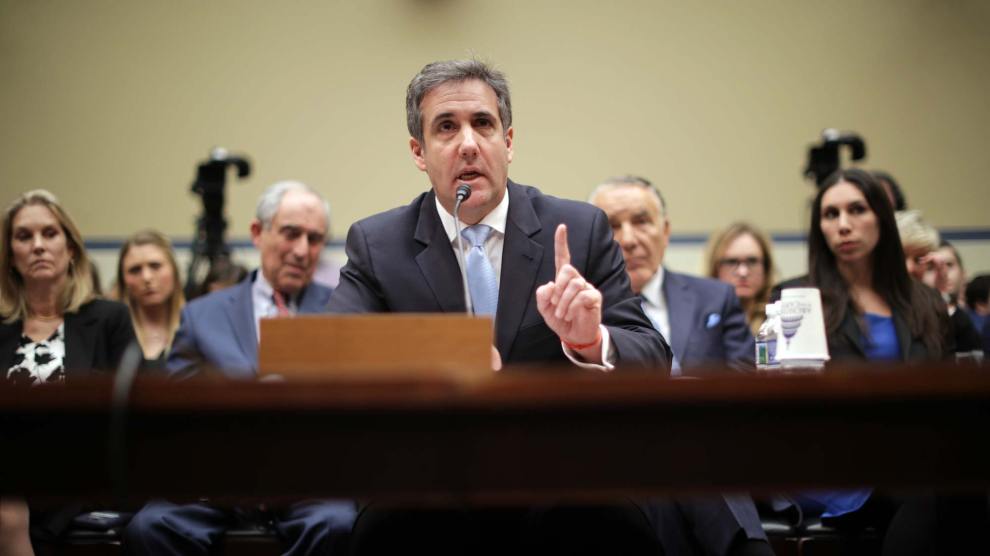 During stunning testimony before the House Committee on Oversight and Reform on Wednesday, Michael Cohen, the president’s former personal lawyer, called his old boss “a racist,” “a con man,” and a “cheat” while detailing a laundry list of lies by Donald Trump. But Cohen also implicated Trump, and on a number of occasions, his family members, in an array of crimes. Here are some highlights:

Cohen arrived at the hearing with copies of checks that Trump sent him while serving as president to reimburse the $130,000 hush-money payment Cohen personally made just before the election to Stormy Daniels, the porn star who says she had an affair with Trump. Cohen has already pleaded guilty to conspiracy to violate campaign finance law, leaving Trump as an unindicted co-conspirator in the case. But Cohen provided new details further implicating the president on Wednesday. He said he arranged with Trump and Trump Organization CFO Allen Weisselberg to receive the money in installments so that they resembled retainer payments. But that was a fake story: The installment plan they arranged was used “in order to hide those payments,” Cohen said—in other words, to avoid disclosing the payments to the Federal Election Commission and to the public.

“He was telling me to lie.”

Cohen conceded that this means he is asserting that Trump carried out a criminal conspiracy while he was president.

Cohen also said he had checks that were signed by Weisselberg and Donald Trump Jr. Weisselberg has already received immunity to cooperate with prosecutors in the Southern District of New York. But Cohen’s testimony suggests that Trump Jr. could also be charged with conspiracy.

Cohen has pleaded guilty to lying to Congress in past statements he shared with the House and Senate intelligence committees. Cohen admitted in his plea deal that he lied about the duration of Trump’s pursuit of the Trump Tower Moscow deal, falsely claiming that the effort did not extend well into 2016 in an effort to diminish the extent of any leverage Moscow may have gained over Trump through the putative deal.

Cohen said Wednesday that Trump did not explicitly tell him to lie, but used, in a sense, a code that Cohen said he understood from years of working for him to ensure Cohen did not reveal the extent of his company’s activities in Russia. “He would look me in the eye and tell me there’s no business in Russia and then go out and lie to the American people by saying the same thing,” Cohen said. “In his way, he was telling me to lie.” Cohen said Trump made it clear through “personal statements to me that we both knew were false…that he wanted me to lie.” This suggests that when he lied to Congress, Cohen believed he was doing so at Trump’s behest.

Cohen also said that Trump’s personal lawyers reviewed and edited his statements to the intelligence committees. He said the edits related to what he would say about how long the Trump Organization pursued the tower deal. If true, this might implicate Trump and even his lawyers in helping Cohen lie to Congress.

Asked which lawyers he was talking about, Cohen named Trump’s personal lawyer, Jay Sekulow, and Abbe Lowell, who represents Trump’s son-in-law, Jared Kushner, as the lawyers who reviewed his testimony. A person familiar with the legal team said Lowell and Sekulow had reviewed the testimony under a joint defense agreement. But the person denied that Sekulow or other Trump lawyers had edited the statement. “No one adjusted his time frame,” the person said.

In a statement after the hearing, Sekulow disputed Cohen’s claim: “Today’s testimony by Michael Cohen that attorneys for the President edited or changed his statement to Congress to alter the duration of the Trump Tower Moscow negotiations is completely false,” Sekulow said.

Cohen said that in July 2016, he was in Trump’s office when longtime Trump adviser Roger Stone, who advised the president’s campaign, called. On speakerphone, Stone told Trump that “he had just gotten off the phone with Julian Assange,” the founder of WikiLeaks, Cohen says. Stone told Trump that “within a couple of days, there would be a massive dump of emails that would damage Hillary Clinton’s campaign,” Cohen recounts. Cohen later said that Stone’s call was put through to Trump by Rhona Graff, Trump’s longtime secretary, making Graff a potential witness.

Cohen also described standing in a room in June 2016 with Trump when Trump Jr. walked behind his father’s desk and said “in a low voice” that “the meeting is all set.’” Trump said “Okay, good,” according to Cohen. Cohen said he later concluded that in this exchange, Trump Jr. had told his father about the June 2016 Trump Tower meeting where Trump Jr. hoped to get “dirt” on Hillary Clinton offered by a Russian emissary.

Both assertions could implicate Trump in perjury. Trump reportedly claimed in written answers to special counsel Robert Mueller that Stone did not tell him about WikiLeaks and that he did not know in advance about the 2016 Trump Tower meeting.

Cohen also suggested Trump committed perjury during a 2013 deposition when Trump denied having a relationship with Felix Sater, a convicted felon and former FBI informant who worked for Trump pursing deals. Sater would later team up with Cohen on a secret effort to win Kremlin support to build a Trump Tower in Moscow.

“I’ve seen him a couple of times; I have met him,” Trump said under oath. “If he were sitting in the room right now, I really wouldn’t know what he looked like.” Cohen told the committee that Trump lied in that statement; Cohen noted that Sater had used an office on the same floor of Trump Tower where Trump had an office—a sign of closeness to the president. Did Trump “lie under oath” in that deposition, Cohen was asked. “Yes,” Cohen said.

Cohen also testified that he had briefed members of the Trump family—he later specified that he meant Trump Jr. or Ivanka Trump—on the Moscow tower deal “approximately 10 times.” That’s not what Trump Jr. told the Senate Judiciary Committee in 2017: “I was peripherally aware of it, but most of my knowledge has been gained since as it relates to hearing about it over the last few weeks.” He was testifying to that panel under oath, and the discrepancy increases his chances of perjury charges.

That’s not all. Cohen suggested Trump may have defrauded insurers, cheated on his taxes and illegally used his charity for personal profit. Cohen also said he knew of other criminal activity by the president, but said he could not discuss it due to his ongoing participation in federal investigations.