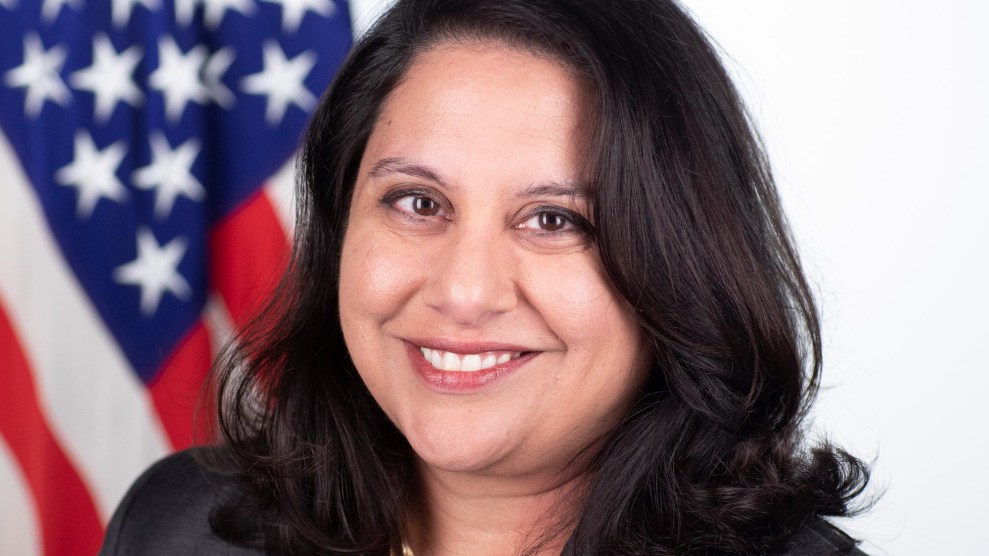 Neomi Rao, currently the Trump administration's "deregulatory czar," faced a confirmation hearing for a seat on the DC Circuit court of appeals.Official photo/Office of Information and Regulatory Affairs

On Tuesday, during her confirmation to replace Brett Kavanaugh on the DC Circuit Court of Appeals, Trump nominee Neomi Rao distanced herself from college writing in which she suggested that women who drink too much bear responsibility for any ensuing sexual assault. She told the Senate Judiciary Committee,  “When I was in college it was a time of exploration,” and called her early work “idealistic.” Rao said that in college, she had enjoyed commenting on events then taking place on campus, but now looking back at some of the things she had written, “I cringe.”

“In the intervening two decades, I like to think thatI’ve matured as a thinker and a person,” she said.

As an undergrad at Yale in the early 1990s, Rao was the editor of the Yale Free Press, a campus publication that described itself as “somewhere to the right of Attila the Hun.” During her four years at the university, she wrote a host of controversial articles that foreshadowed the conservative lawyer she would become. Among the most inflammatory of her college writing were pieces she wrote criticizing feminists and victims of sexual assault. As Mother Jones reported last month:

[I]n an April 1993 article, Rao wrote that feminists had torn down traditional structures in the pursuit of gender equality and in the process had “unleashed other forces.” The patriarchal rules the feminists were destroying, Rao wrote, “also provided greater protection from horrors such as rape.”

A year later, in the Yale Herald, another campus publication, she wrote, “I’ve been to a lot of fraternity parties on this campus. It has always seemed self evident to me that even if I drank a lot, I would still be responsible for my actions. A man who rapes a drunk girl should be prosecuted. At the same time, a good way to avoid a potential date rape is to stay reasonably sober. And if she drinks to the point where she can no longer choose, well, getting to that point was part of her choice.” She concluded, “Implying that a drunk woman has no control of her actions, but that a drunk man does strips women of all moral responsibility.”

Rao’s college writings have enraged liberals, who have mobilized to fight her nomination. Her confirmation is likely to be especially contentious because the Trump administration has recently floated her name as a possible replacement for Supreme Court Justice Ruth Bader Ginsburg, should her health prevent her from returning to the bench.

On Tuesday, Democrats on the Judiciary Committee grilled Rao about her youthful opinion writing, particularly her suggestion that a sexual assault victim who drinks too much is responsible for the crime against her. Sen. Patrick Leahy (R-Vt.), a former state prosecutor, told Rao, “I prosecuted a lot of rape cases. I would hate to think that was the view of the courts and the jury. If that view is pushed it results in victims too ashamed to come forward. Do you currently believe if a woman consumes too much alcohol, she’s to blame if someone rapes her?”

Rao said she has always said that sexual assault is a crime for which men should be held responsible. She explained that her comments on drinking had simply been a “common sense observation” that there were steps women could take to protect themselves from sexual assault. “That’s the advice I give my children,” she said.

Democrats weren’t alone in raising questions about Rao’s writing. Sen. Joni Ernst (R-Iowa), a new addition to the Judiciary Committee, recently disclosed that she is a sexual assault survivor. She told Rao that her writings on campus sexual assault “give me pause.” She asked Rao whether she believed rape was wrong, and who she believed was responsible for the crime. Rao responded that the man who commits the rape was responsible, and she told Ernst that “I regret” the things she had said in college about sexual assault victims.

In other articles she wrote in college, Rao criticized multiculturalism and affirmative action:

In one piece in the Free Press headlined “Submission, Silence, Mediocracy,” she wrote, “Myths of sexual and racial oppression propogate [sic] themselves, create hysteria and finally lead to the formation of some whining new group. One can only hope to scream, ‘Perspective, just a little perspective, dahling!’”

These comments also drew fire from the Democrats on Tuesday. Sen. Richard Durbin (D-Ill.) asked Rao how she could reconcile calling these sorts of comments as “idealistic,” even as she now calls them “cringeworthy.” She didn’t win any fans from Democrats on the panel when she said that she believed there should be “more tolerance of racial differences.” Durbin shot back, “More tolerance of racial discrimination?” Rao insisted that she believes her views on multiculturalism were idealistic because “I was inspired by Martin Luther King that we should be judged by the content of our character and not the color of our skin.” The comment drew some groans from the public at the hearing.

Currently the administrator of the Office of Information and Regulatory Affairs (OIRA) at the White House, Rao has made a name for herself as Trump’s deregulatory czar. A conservative lawyer and longtime member of the Federalist Society, Rao clerked for Supreme Court Justice Clarence Thomas, and was instrumental in setting up a center at the Antonin Scalia Law School at George Mason University devoted to the administrative state. The center was created with funding from the Koch brothers, the conservative oil and gas industry magnates.