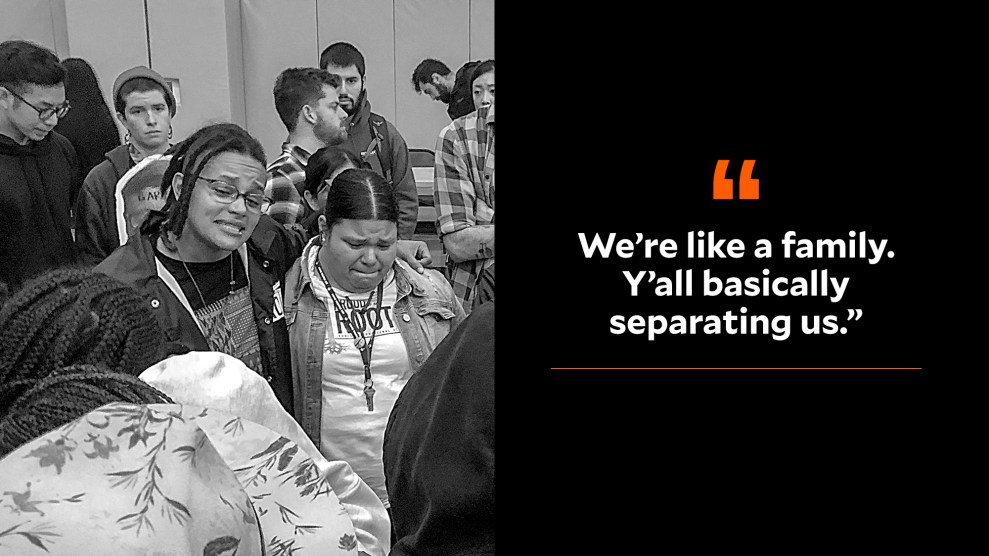 At a packed school board meeting in downtown Oakland on January 28, 13-year-old Johnnay Ellis walked to the podium in a black windbreaker, her school’s motto written on the back: “I know where I come from. I know where I’m going.”

Johnnay is an eighth-grader at Roots International Academy, a small East Oakland middle school that over the past few months has known nothing but uncertainty. In late November, school officials informed staff that Roots was up for closure due to years of low test scores and underenrollment. Shortly before winter break, families received robocalls from the Oakland Unified School District confirming the rumors. And after several contentious public meetings, the school board was now set to vote on whether to officially close Roots at the end of the school year.

The day Roots staffers gave the news to students, Johnnay was out sick; she found out on Instagram. “I’m like, ‘Oh my God.’ That really took a shock to my heart,” she says. “I grew at Roots.” She went from being the little girl who didn’t like talking to the girl who had been chanting, “We are Oakland! Keep Roots open!” into a megaphone at the last two school board meetings. She was here at this meeting with her classmates and teachers to make a final plea to keep her school open.

“How would you feel if someone tells you you are not of quality? If you came here for a day, y’all would not want to shut down Roots.”

An ongoing standstill between the district and educators lingered in the background. Teachers in Oakland have worked without a contract for a year and a half, and like their counterparts in Los Angeles, who recently wrapped up a bitter six-day strike, they’re demanding higher pay, reduced class sizes, and more nurses and counselors. They’re also fighting the creeping influence of charter schools in the city, and Roots, which faces stiff competition for students from a number of East Oakland charters, quickly became a rallying cry for teachers across the city. “I Stand With Roots” signs started popping up at school board meetings and protests, and the president of the local teachers’ union even demanded that school closures be part of negotiations. The district, citing a steep yearslong budget deficit, has plans to close or merge up to 24 schools—and Roots appeared to be the first domino to fall.

When Johnnay stepped up to the mic to address the school board, an orange ribbon of solidarity tied around her neck, she asked them, “How would you feel if someone tells you you are not of quality? If you came here for a day, y’all would not want to shut down Roots.”

More than a dozen other Roots students got up in front to speak as well.

“Roots gave me hope when there wasn’t any. We’re like a family,” said eighth-grader Tenai Harris. “Y’all basically separating us.”

“This is like my second family,” said seventh-grader Kenaiya Powell, whose siblings also went to Roots. “They always had my back.”

Another student, Lorenzo Anthony, recalled how he met Oakland school superintendent Kyla Johnson-Trammell a year earlier and shook her hand. The impression he got was that she would improve their school. “It became, ‘I’m going to shut down your school’ in one year. What happened?”

When Johnson-Trammell took over in July 2017, she became the fifth superintendent to oversee the district in nine years. Her predecessor, Antwan Wilson, abruptly had left Oakland to take a job as Washington, DC’s chancellor of public schools—and had saddled the district with a $30 million deficit. A state financial risk report from August 2017 concluded that Oakland Unified, under Wilson, had “lost control of its spending, allowing school sites and departments to ignore and override board policies by spending beyond their budgets.” (Wilson resigned from his DC schools post in February 2018 after it came to light that he had skipped the city’s usual lottery admissions to get his daughter into a coveted high school, violating a policy he himself put in place to stop DC officials from doing the same for their children.)

Oakland Unified subsequently cut $9 million from its budget in the middle of the 2017-18 school year, including $3.8 million at schools. An Alameda County Grand Jury report released last June determined that the district had been operating nearly twice as many schools as necessary; enrollment in traditional public schools has fallen by 33 percent since 2000. “School occupancy must be assessed and painful decisions made regarding closure and consolidation as soon as possible,” read one recommendation in the report.

Oakland Unified has seen its enrollment drop thanks in large part to the rise of charters in the city. Since 2000, the number of kids in district-approved charter schools has exploded, and now more than a quarter of the roughly 50,000 students in Oakland attend the district’s 34 charter schools. According to Ismael Armendariz, vice president of the local teachers’ union, Roots has been “devastated” by the proliferation of charter schools in the city. “The district has not been able to invest in that school,” he says. “And so when you’re not able to invest in it, things like enrollment start to drop, and then as enrollment starts to drop, you have less funding. And so it just becomes a cycle where you lose enrollment, you’re losing funding, and then you have a higher concentration of kids who need support. There are kids there who are not getting what they need.”

This cycle has made Roots vulnerable for years. Rose Chardak, a sixth-grade teacher at the school, recalled that in 2015 the district had proposed Roots merge with a nearby school also suffering from dwindling enrollment, Frick Impact Academy. But the Roots staff had no interest in moving to Frick. “I feel like it’s always in the back of people’s minds that someday there would be a closure, that someday there would be a merger,” Chardak says.

Even so, the news hit the school community hard. Jane Lee, an instructional coach at Roots, was substituting the day students were told the district wanted to close their school. “It was really sad,” Lee says. “Kids were angry. Kids were confused. Kids were asking really smart and logical questions that we still don’t have some answers to.” Lee made a whiteboard filled with Post-it notes of what students were thinking about. One note read, “I don’t think that it should close because people live close to here and they might not have a way to school.”

“Kids were angry. Kids were confused. Kids were asking really smart and logical questions that we still don’t have some answers to.”

Chardak taught the news to her sixth-graders like it was a lesson, putting a map of Roots next to Coliseum College Prep Academy, a middle and high school that will expand into Roots’ campus next year. At one point, she remembers, one of her students slunk down in her seat and put her head on her desk. Chardak, who had held it together up to that point, was brought to tears.

“When the district or people or the superintendent comes out with a public statement that we need to close Roots so that we give students the opportunity to go to a higher-quality school, she’s essentially saying that the teachers here are low-quality,” Lee says. “Or that Roots programming is low-quality. Or that the students at Roots are low-quality. That couldn’t be further from the truth.”

When Lee thinks of what makes a high-quality school, it’s less about test scores and more about the care teachers put into their students and how teachers work together to act as a model for how students should communicate with one another. “Our students feel seen and heard and supported and taken care of,” she says. Lately, teachers have been experimenting with how to bring project-based learning into the classrooms. Eighth-grade teachers were weaving in civics into their English, history, math, and science curriculum, helping students craft an answer to the question: How are bodies policed and criminalized across the United States? “That’s partially why this closure is so hurtful and so devastating,” Lee says. “We were already planning for next year.”

By the time teachers and students got to the board meeting on the 28th, Roots’ closure already looked like a foregone conclusion. District leaders kept talking about the overabundance of schools and Roots’ low test scores, and with a big fight over teacher wage increases looming, Oakland Unified seemed dead set on shuttering the school. But that didn’t stop students like Johnnay from facing the school board and reflecting on what their school meant to them.

After hours of public testimony and a forced recess, the Oakland Unified board eventually voted 6-1 to close Roots International Academy at the end of the school year, leaving 266 students, their families, and their teachers reeling.

The reality set in shortly after 10 p.m. As people spilled out of the gymnasium and the local TV cameras clicked off, the students gathered in a circle with Cecelia Jordan, the school’s restorative practices coordinator, and other teachers, and embraced one another. They started to cry. “I’m sorry,” Jordan told her students.

On Monday, Oakland’s teachers voted overwhelmingly to authorize a strike that could begin toward the end of the month.