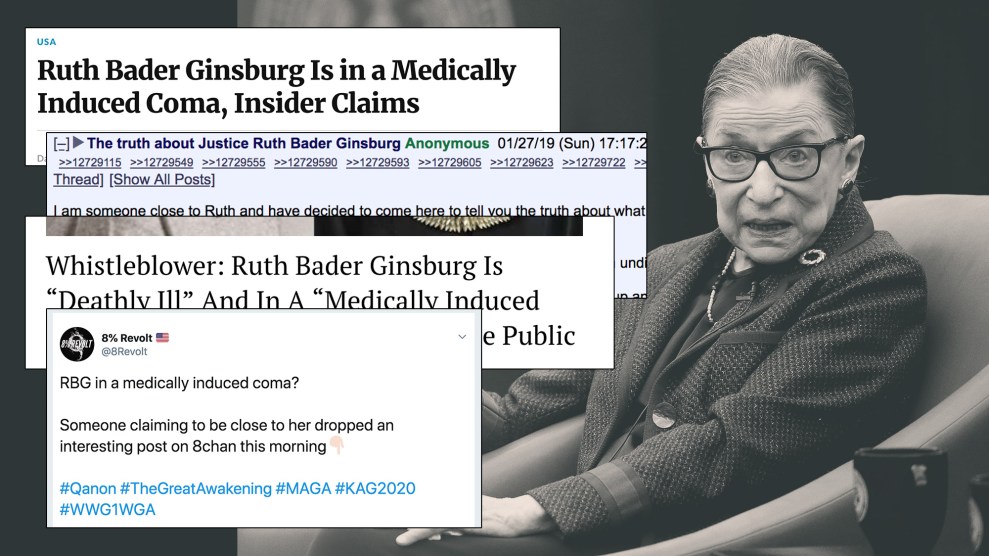 Over the last month, baseless conspiracy theories about Supreme Court Justice Ruth Bader Ginsburg’s health have been tip-toeing toward the mainstream. The notion came into wide attention last week when Sebastian Gorka, a presidential ally and former Trump administration official, sent a tweet suggesting there was something suspicious about the public absence of the justice, who is recovering from cancer treatment.

A recent popular rumor first surfaced on January 27, three days before Gorka tweeted, when an anonymous poster on 8chan, an imageboard site notorious for being an origin point of harassment campaigns, disinformation, racism and sexism, claiming to be “someone close to Ruth” wrote that the justice “is in a medically induced coma at an undisclosed location.”

The coma theory spread quickly from 8chan, joining other Ginsburg health rumors already in circulation. While it is unclear where Gorka learned of the theory, in the days after the 8chan post, similar unproven claims about Ginsburg’s health rippled across several private QAnon and conspiracy Facebook groups that collectively have over 100,000 members. One of the groups, which boasts over 50,000 followers, repeatedly posted a story about Ginsburg being in a coma by a dubious news outlet, Clover Chronicle, multiple times, racking up hundreds of likes and dozens of shares. That helped the Chronicle story reach beyond the groups, gaining thousands of shares and engagements across social media sites. The theory, without a link to the story, was also shared across various private QAnon and conspiracy related Facebook groups dozens of times.

The incident illustrates how the groups have become a means of spreading disinformation, as documented by Jonathan Albright, a researcher at Columbia University’s Tow Center for Digital Journalism.

“Groups have become the preferred base for coordinated information influence activities on Facebook,” Albright wrote in a November Medium post. Albright’s post pointed out that groups can take advantage of all of Facebook’s “powerful free organizing and content promoting tools—with few, if any, of the consequences that might come from doing this on a regular page or by sharing things out in the open.”

That makes the groups unaccountable and their influence practically invisible. What is posted in private groups is “not discoverable through Facebook’s standard search feature or through the APIs that allow content to be retrieved from public pages,” Albright wrote. “Yet once the posts leave these groups, they can gain traction and initiate large-scale information-seeding and political influence without being easily traced.”

Albright credited private groups as helping significantly boost the theory that liberal megadonor George Soros was behind the caravan of migrants traveling to the U.S.’s southern border in October. That theory gained enough prominence that U.S. Congressman Matt Gaetz (R-Fla.) tweeted about it and it also galvanized a shooter in Pittsburgh to carry out an attack on a local synagogue.

Theories about Ginsburg being in a coma or dead aren’t as widely shared as the Soros-caravan conspiracies were at their peak, but experts think that the case still shows the power of relatively lightly moderated private Facebook groups.

“Groups have become the preferred base for coordinated information influence activities on Facebook.”

Joan Donovan, a social media manipulation and extremism expert at the Harvard Kennedy School’s Shorenstein Center, explained that private Facebook groups offer users benefits. “Let’s take a good scenario,” she says, “people who have rare medical diseases, that might not be something they want friends and family to see, but they still should be able to connect and find and each other and share information. Private Facebook groups can do that.”

But the private groups are prone to spreading harmful or inaccurate information. “The issue is when you’re a novice and seeking info online and you fall into traps laid for you,” she said. “Those are opportunities for media manipulators to strike and recruit.”

Facebook’s reliance on users to self-moderate makes the groups particularly susceptible to disinformation. Most members of a private group won’t flag abusive and hoax posts if they’ve chosen to be in the group because they’re sympathetic to such content. And outside users who don’t share those predispositions will never see such content and be given the chance to flag it.

Donovan contrasted this to Reddit. While she acknowledges that platform has had its own moderation and abuse issues, its relatively public architecture has spurred its owners to take down nefarious and misleading subreddits, and it has more robust processes for reviewing groups. Something resembling this type of more active review instead of its current relatively laissez-faire approach, she said, could help Facebook curb abuse and manipulation on its platform.

To Travis View, a conspiracy theory researcher who has closely followed the QAnon phenomenon, the Ginsberg coma story looks like an attempt to boost the reputation and profits of the Clover Chronicle, a site he says displays ad farm like tendencies. One of the site’s posts pushing the conspiracy was cited multiple times in private groups.

While View says it’s almost impossible to know who created the original 8chan post claiming that Ginsburg is in a coma, he has uncovered digital footprints that he thinks could suggest coordination between the news site and the first 8chan post pushing the theory.

“Those are opportunities for media manipulators to strike and recruit.”

“[The hoax news post] links to an archive of an 8chan post. The archived page was taken just four minutes after the post was made. The first tweet linking to the Clover Chronicle story was 40 minutes after the 8chan post,” he said, noting that archives of pages, especially on lesser-known sites, have to be manually recorded, and suggesting the speed in which they were indexed reflects possible coordination.

Regardless of any potential coordination, the posts underscore a recurring issue for Facebook—people exploiting fake and sensational news that spreads quickly across the platform to drive clicks.

The post from the ad farm site, in addition to being shared widely within private Facebook groups, commanded large engagement numbers, accruing over 21,000 engagements, according to metrics by the social media analytics site, BuzzSumo, after being shared by pages, accounts and groups whose followers total at over 4 million, according to the social media tool, CrowdTangle. Those shares would have brought the site traffic, ads, and revenue.

To Donovan, the misinformation laundering around Ginsburg’s health is also emblematic of another trend: conspiracy theorists’ attempts to game platforms by getting ahead of impending news.

“We know Ruth Bader Ginsburg is an elderly woman. She eventually, like all of us, will pass away,” Donovan said. “The content that gets seeded now might actually become the first content you see when she actually does pass away. The metrics the conspiracy theorists are getting mean that in a news event, there will likely be another uptick in QAnon attention because they’re all seeding RBG news.”

Because of this, should Ginsburg’s health take another bad turn, search results on Facebook and any other platforms hoax peddlers are trying to game could be rife with conspiracy related content—content that has already been gaining traction and the favor of the platforms’ algorithms.