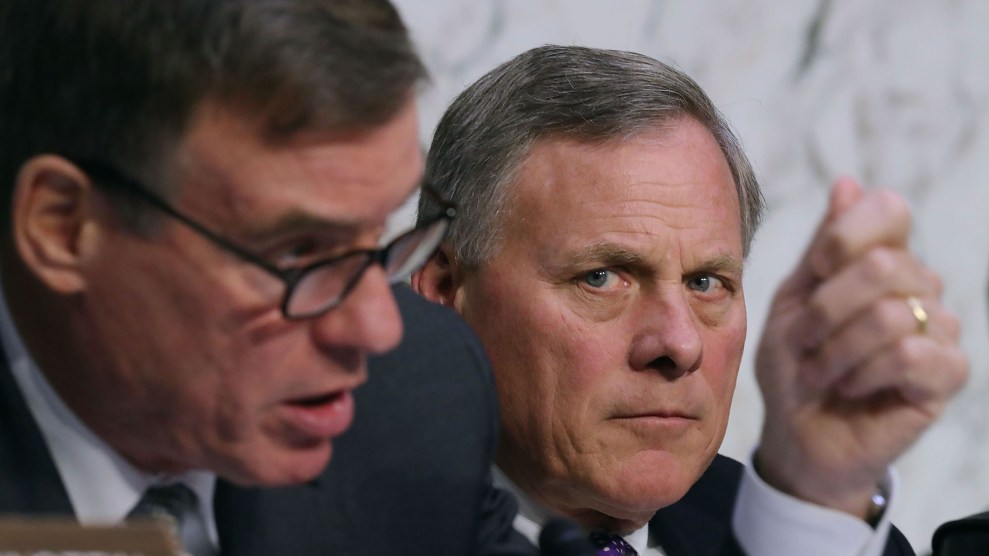 Democrats on the Senate Intelligence Committee are pushing back on a claim by the panel’s chair, Richard Burr (R-N.C.), that the committee’s two-year investigation has not found “anything that would suggest there was collusion between the Trump campaign and Russia.” And they dispute an NBC News report saying that Democrats agreed with Burr that they have yet to see clear evidence of a conspiracy between President Donald Trump and Moscow.

Sen. Dianne Feinstein (Calif.), a senior Democrat on the panel, and Sen. Mark Warner (Va.), the top Democrat on the committee, also said they have not reached any conclusions about their investigation. “I disagree,” Warner said Tuesday when asked about Burr’s claims.

Burr discussed the committee’s finding in an interview published last week by CBS News and reiterated his view on Tuesday. By then Trump had jumped on Burr’s comments, tweeting Sunday that the panel had “found NO COLLUSION BETWEEN TRUMP AND RUSSIA!”

NBC reported Tuesday that the committee is “approaching the end of its investigation” without finding “direct evidence of a conspiracy between the Trump campaign and Russia.” A Democratic aide on Tuesday contested the emphasis the story placed on that finding. “The word ‘direct’ is doing a lot of work in that headline,” the aide said, noting that the two sides of the committee agree on the facts but differ on their significance. “Certainly there is plenty of circumstantial/indirect evidence of collusion,” the aide said.

In an interview Tuesday afternoon, Warner told Mother Jones that the committee is still far from completing its probe. “We’ve still got many of the most major figures to either come or come back,” he said.

Manafort is awaiting sentencing after pleading guilty to money laundering, obstruction of justice, and other charges. In a partially redacted transcript of a recent court hearing, prosecutors revealed that the lobbyist, while heading the Trump campaign, gave detailed internal polling to a longtime Ukrainian business associate, Konstantin Kilimnik, who the FBI says has Russian intelligence ties. In the same meeting on August 2, 2016, Manafort discussed a Ukrainian peace plan pushed by Kilimnik that included the United States lifting sanctions on Russia, a major Kremlin foreign policy goal.

Warner, citing the Manafort revelations, said the public record alone challenges any conclusion that the Trump campaign did not conspire with Russia.

“The notion that the president’s campaign manager was sharing internal campaign documents with the Russians in advance of the release of information that came from Russia and that interfered massively with the campaign is mind-boggling,” Warner said. “I’m not going to reach any conclusions at all, but all these facts are already in the public domain.”

“The president is terrified about where our investigation and where the Mueller investigation may lead,” Warner added. “I think we’ll let the facts speak for themselves.”