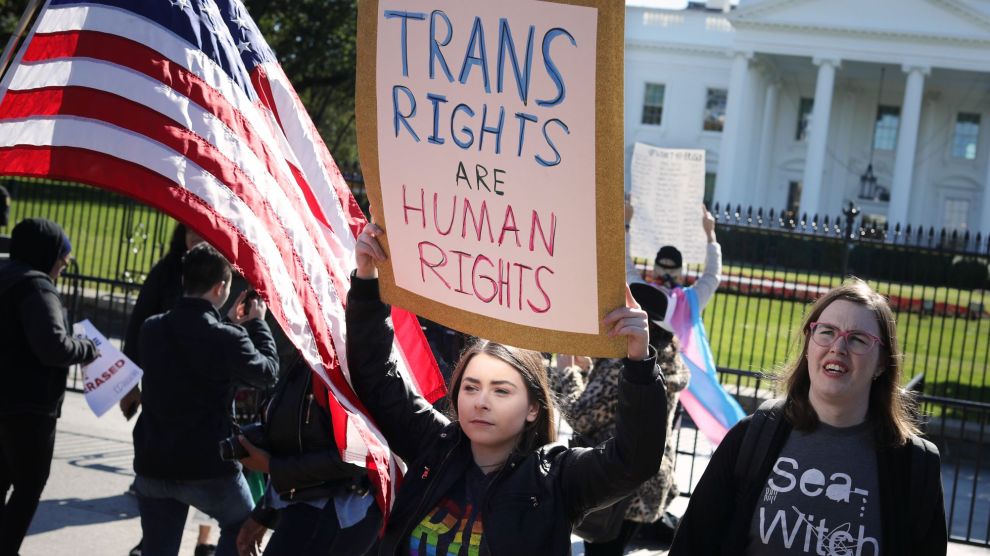 LGBT activists hold a "We Will Not Be Erased" rally in front of the White House on October 22, 2018. Chip Somodevilla/Getty Images

The South Dakota House of Representatives voted Tuesday to ban “instruction in gender dysphoria” for public school students in kindergarten through the seventh grade. The bill, which is now being considered by the state Senate, has been condemned by human rights advocates as a blatant attempt to discriminate against transgender students.

“The entire intention of this bill is to create stigma,” says Cathryn Oakley, state legislative director and senior policy counsel at the Human Rights Campaign. The bill’s sponsor has said he aims to stop schools from “teaching and confusing our young children to be more susceptible to this dysphoria.”

The bill is short on specifics and it’s not entirely clear how lawmakers are defining the term “instruction.” But advocates fear the legislation could be used to prevent teachers or counselors from providing support to students who come out as transgender.

“When you have kids who are vulnerable anyway and you don’t let the people they trust at their school answer questions, it can be really dangerous and leave these kids without any support in their school,” says Libby Skarin, policy director at the American Civil Liberties Union of South Dakota. “Are teachers not supposed to acknowledge the existence of their transgender students?”

Oakley also says it’s possible that the bill could be interpreted to preclude classroom discussion of transgender issues entirely—for instance, teachers might be prohibited from mentioning the fact that a historical figure was transgender.

The bill passed South Dakota’s House by a 39-30 margin and now moves on to a committee in the state Senate, where advocates believe there’s a good chance it will reach the floor. It’s one of four anti-transgender bills that have already been introduced in the state Legislature this term. One would have given parents the right to refuse health care treatment to support a child’s gender transition. Another bill in the House would prevent transgender students from participating in the school sports consistent with their gender identity. (A similar bill was tabled in the Senate.)

“It’s creating an atmosphere that is really harmful to the kids in our state,” Skarin says.