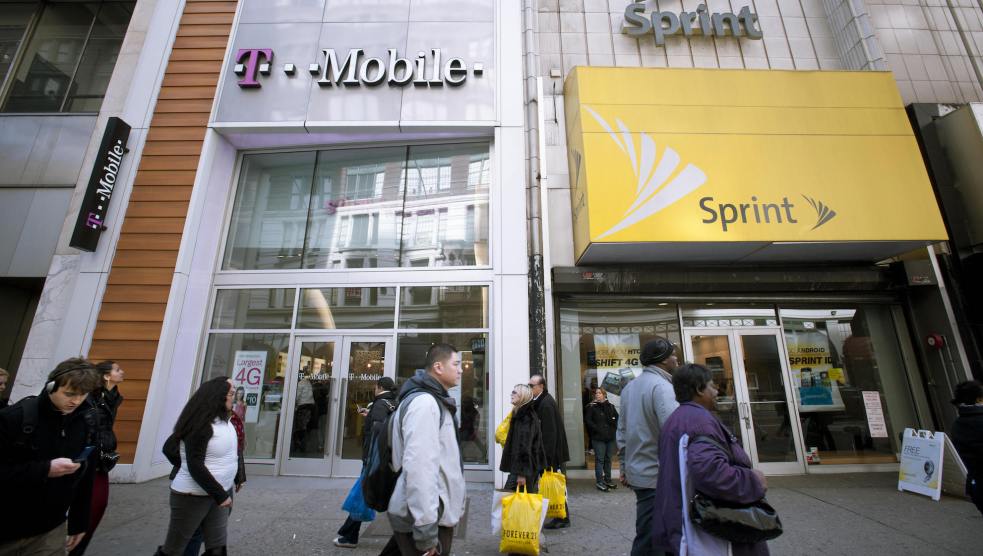 Advocates worry that a merger between T-Mobile and Sprint will hurt workers and consumers.Richard B. Levine/Levine Roberts/Newscom/ZUMA

In January 2018, T-Mobile completed its acquisition of a small Midwestern telecommunications company, Iowa Wireless Services (iWireless). While the company only provided service to 75,000 customers, many of its users had no other options. The service was precisely what rural communications advocates have asked for: affordable, effective, and accessible. T-Mobile, one of the nation’s biggest telecom providers, promised it would improve on those qualities.

“We’ve been disrupting the wireless industry for the benefit of consumers for the last five years now and customers in Iowa will be able to experience the benefits firsthand,” T-Mobile CEO and president John Legere said when the merger was first announced, promising in a statement to expand LTE coverage in the state.

The promises sound familiar to those offered to lawmakers this summer on the heels of a bigger business plan: A proposed $26 billion merger with Sprint. “Jobs will go up and prices will go down,” Legere told Sen. Amy Klobuchar (D-Minn.) at a Senate judiciary subcommittee on antitrust in June.

But the story of iWireless, alongside new projections from economists, shows that Legere’s promises are far from the whole picture. Instead, jobs could end up being cut, prices could go up for the lowest-income users, and other companies could be pressured into lowering wages to keep up.

“A lot of our customers didn’t have much money,” said Kyari Shipp, a store manager at a former iWireless store in Waterloo, Iowa, in a recent report released by the Communications Workers of America (CWA), a union representing over half a million communications workers nationally. Of the 129 iWireless stores operating during the takeover, only 18 were converted into T-Mobile stores, with the company choosing to abandon the rest of the iWireless franchise owners. Unable to carry T-Mobile, Shipp’s store tried carrying Boost Mobile, a competing prepaid brand owned by Sprint, but her customers still struggled to afford the higher prices and the store closed in January.

Since T-Mobile’s purchase, nearly one-third of iWireless’ former customers now live more than two hours from a T-Mobile retail location. T-Mobile, which reported to the US Securities and Exchange Commission after the merger that it only expected to retain 17,000 of the company’s 75,000 users—and only 4,000 prepaid consumers—seemed aware of the potential loss and made it clear that the primary asset of the acquisition was the spectrum held by iWireless.

“In any market in which there are few competitors, including just one, [employers] have more discretion [to suppress wages],” says Marshall Steinbaum, research director at the Roosevelt Institute and a co-author of the report. According to Steinbaum, there are “pretty unanimous findings” that higher concentration can have negative effects on the economy, even when prices go down. Traditional antitrust arguments, which focus on whether the overall price goes up or down, tend to ignore how monopoly power can hurt people who work for the company. Job loss could range from as low as 10 jobs in Maine to over 3,000 in each Florida, California, and Texas.

“The merger strengthens two viciously anti-union companies,” says Debbie Goldman, research and telecommunications policy director at the CWA. For over a decade, T-Mobile workers have been trying to organize with the union but have been rebuffed by management, according to Goldman. While some workers have reached collective bargaining agreements in individual stores in Connecticut and New York, T-Mobile currently does not recognize any employee union membership.

With the merger, T-Mobile has tried to assuage critics by promising better data plans for consumers and promising to create “5,600 additional American customer care jobs by 2021.”

Antitrust efforts have gained interest in Congress over the past year. Rep. David Cicilline (D-R.I.), chair of the House antitrust subcommittee, has expressed interest in looking at the “impact on communities and wages and labor competition” of mergers. Attorneys general in states including California and New York are also investigating the impact of the potential T-Mobile and Sprint merger.

On Tuesday, nine Democratic senators signed onto letters calling for both the Justice Department and the Federal Communications Commission to reject the merger. Signatories included 2020 presidential candidates Sens. Amy Klobuchar (D-Minn.), Kirsten Gillibrand (D-N.Y.), Elizabeth Warren (D-Mass.), Cory Booker (D-N.J.), and possible candidates Bernie Sanders (I-Vt.) and Sherrod Brown (D-Ohio). “This merger will turn the clock back, returning Americans to the dark days of heavily consolidated markets and less competition, with all of the resulting harms,” the senators wrote. “We urge you to act to prevent this dangerous merger from proceeding.”

But it’s unclear if that reevaluation of mergers will carry water at President Donald Trump’s DOJ and FCC. Under Republican leadership, the FCC has taken a number of actions harming low-income consumers, including the gutting of the Lifeline Program that provides phone subsidies to low-income families. Consumer advocates fear that the Lifeline-approved brands managed by Sprint could be pared down. Both Sprint and T-Mobile represent twice as many low-income consumers as the two other leading brands, but a post-merger T-Mobile intends to go after more premium consumers. “There’s a great concern that when you merge the new T-Mobile with Sprint, that with the rebranding Lifeline is not a market they want to be in,” says Carmen Scurato, senior policy counsel at Free Press.

Both T-Mobile and Sprint, which is owned by SoftBank, have courted Trump’s favor recently. T-Mobile executives have booked more than 52 nights at Trump’s DC hotel since announcing the merger in April, the Washington Post reported. In advance of hearings about the merger on Wednesday and Thursday, Sen. Warren and Rep. Pramila Jayapal (D-Wash.) wrote a letter drawing attention to the company’s spending at the president’s hotel. SoftBank’s CEO has also fostered a relationship with the president by promising a $72 billion investment in the United States, though it’s unclear what that investment will look like.