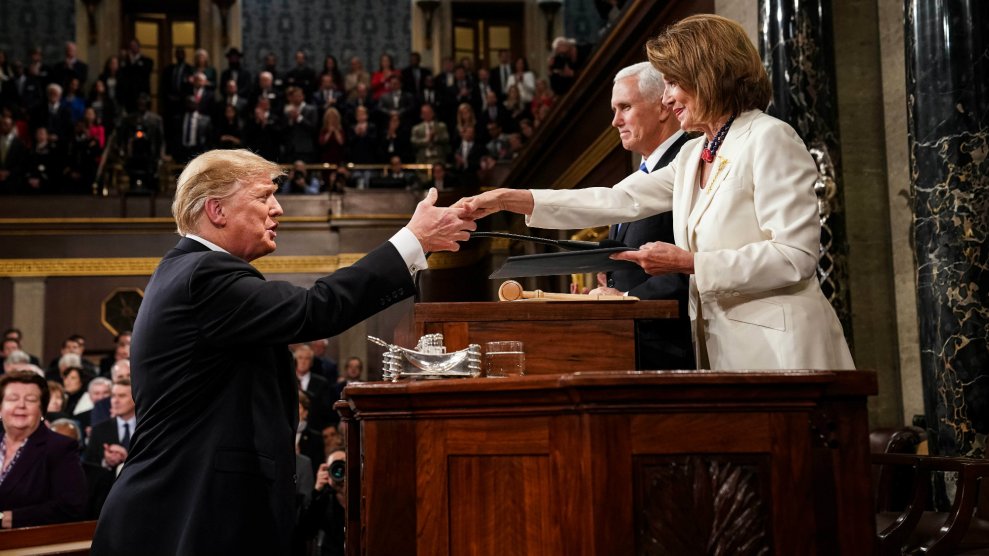 By his own admission, President Donald Trump declared a national emergency at the southern border to turbocharge the construction of a border wall that Congress refused to fund. “I could do the wall over a longer period of time,” he told reporters earlier this month. “I didn’t need to do this, but I’d rather do it much faster.”

But in the rush to build his “big, beautiful” wall, Trump may have actually invited more backlash and oversight from Congress and the states. House Democrats have already introduced a bill to reverse his declaration, and a lawsuit filed by 16 states has challenged Trump’s constitutional authority to fund the wall. Then there’s the question of whether Trump can even successfully divert the funds he identified in the first place.

The White House is reportedly planning to steer $3.6 billion from unused military construction projects, $600 million from the Treasury Department’s asset forfeiture unit, and $2.5 billion from a Pentagon counter-drug program toward the wall’s construction. Those plans hit a roadblock last week when Roll Call reported that less than 1 percent of the money Trump intends to take from the counter-narcotics program is still available. (A House Democratic staffer confirmed to Mother Jones that roughly $80 million remains in this designated fund. A Defense Department spokesperson said “no decisions have been made yet” about replacing the missing cash.)

To make up the difference, the House Democratic source said the Pentagon is expected to draw upon its military construction budget. This pool of funds, which includes money for base repairs and the housing of military families, among other line items, is a convenient choice because most construction projects are funded through multiyear appropriations—as opposed to the drug prevention funding, which expires this fall at the end of the fiscal year.

Delaying billions of construction projects could invite its own host of problems. For one thing, these projects include the textbook, job-creating pork-barrel spending that lawmakers use to reward the folks back home in their districts. “There is probably no part of the defense budget that is more directly and concretely linked to the interests of a member of Congress than the MILCON [military construction] budget,” says Gordon Adams, who oversaw national security and foreign policy budgets in the Clinton White House and is now a fellow at the nonpartisan Stimson Center. “These are specific projects in specific districts.” Lawmakers who championed these projects will almost certainly not be inclined to give them up easily. Once senior Pentagon officials sort out which projects will and will not be prioritized, the politically unwelcome task of defending those choices will fall to Pat Shanahan, the acting defense secretary.

“There is probably no part of the defense budget that is more directly and concretely linked to the interests of a member of Congress than the MILCON budget.”

Even though he’s the likely favorite to replace retired general Jim Mattis in a permanent capacity, Shanahan is not exactly beloved by Trump’s top Republican allies on Capitol Hill. Sen. James Inhofe (R-Okla.), who chairs the powerful Senate Armed Services panel, bluntly said earlier this month that Shanahan lacks humility, while Sen. Lindsey Graham (R-S.C.), a close Trump adviser, lashed out at him during a meeting last week in Munich. Josh Rogin of the Washington Post reported that Graham mocked Shanahan’s plan to withdraw all US troops from Syria by the end of April, calling it the “dumbest f—ing idea I’ve ever heard.” If Shanahan followed through on that order, Graham reportedly told him, “I am now your adversary, not your friend.” (Trump recently agreed to keep about 20 percent of the original contingent there.)

Shanahan will need all the Republican support he can get, because Democrats have already begun to turn on him. Even after dozens of Democratic senators voted for his confirmation as deputy secretary, Shanahan has clashed repeatedly in recent weeks with their counterparts in the House. Climate change has emerged as a particularly fraught point of division between the Pentagon and Capitol Hill. Weeks after taking over, Shanahan was scolded by House Armed Services Committee Chairman Adam Smith (D-Wash.) for submitting a climate report that was “half-baked” and “inadequate.” Lawmakers will certainly be watching to see whether any military construction funds related to climate resilience will be affected by Trump’s emergency declaration. These projects tend not to be explicitly about climate change but targeted in a way that addresses its impacts—for example, sprucing up a base that is vulnerable to flooding. Among the military’s top priorities will be to protect projects connected to “health and safety and new missions,” says Mark Cancian, a former Pentagon official with experience in the Office of Management and Budget.

Should they follow through on this, programs with an environmental focus will be vulnerable to delays or cuts. At the same time as Trump is planning to dip into the military construction budget, top military officials are calling on Congress to allocate even more money after a brutal hurricane season—and not for a border wall. Camp Lejeune, the largest Marine Corps base on the East Coast, requires more than $3 billion in repairs beyond what Congress appropriated after Hurricane Florence devastated the North Carolina installation. “We don’t have money for that,” Marine Corps commandant General Robert Neller said at a recent conference hosted by the US Naval Institute. “If we have to pay that ourselves, it’ll take the MILCON budget of the Marine Corps for probably the next four years.”

The ugly politics aside, Trump and Shanahan still have a practical problem. To reprogram funds from one division of DOD, like military construction, to another pot requires direct approval from senior lawmakers of both parties. Traditionally, the leadership of the four committees that oversee defense appropriations need to sign off on a reprogramming request, which will almost certainly be required if Trump hopes to make up for the counter-drug funds that have already been obligated. Given Democrats’ opposition to Trump’s emergency declaration, that request would almost certainly be refused. Trump could do an end run around Congress and scrounge up funds from other dusty corners of the Pentagon’s budget, but he’ll still need to reckon with the unsavory prospect of depriving some Republican allies of signature projects in their districts.

“The politics of this are much more lethal than one thinks,” Adams says.