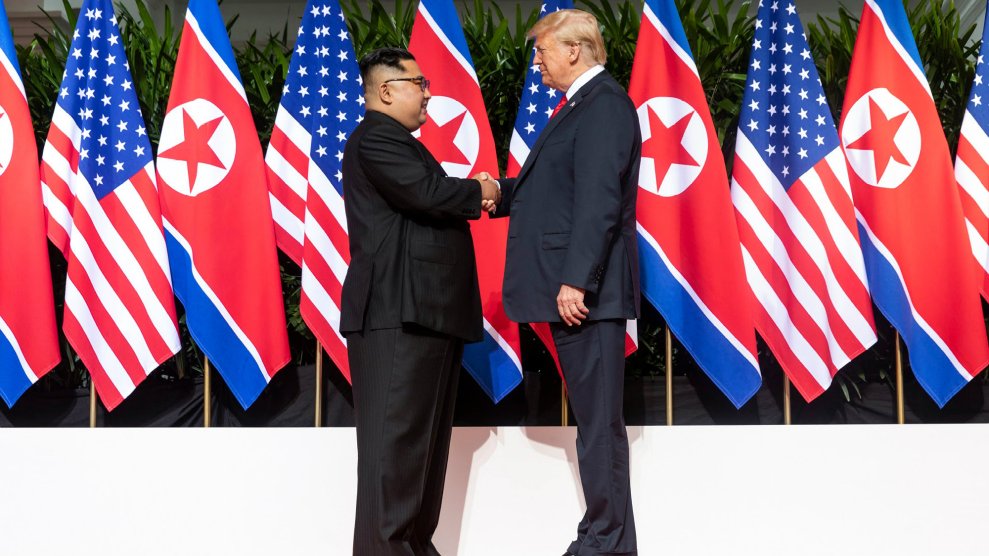 When President Donald Trump emerged from a landmark meeting with North Korean dictator Kim Jong Un in June, he touted the brutal regime’s “tremendous potential” and praised its leader as a “very talented” man. Left out of that rosy assessment was North Korea’s ghastly human rights record, which Trump had denounced only months before as the distinguishing feature of a “cruel dictatorship.”

Human rights have never been a primary concern for Trump, who announced last week that he will meet with Kim in Vietnam at the end of the month. During his presidency, Trump has defended strongmen like Russian President Vladimir Putin and Saudi prince Mohammed bin Salman while dismissing evidence of murders and other crimes committed on their behalf. But, at least for a while, North Korea appeared to be different. In Kim, Trump had a consensus villain whose regime the United Nations considers responsible for “unspeakable atrocities” like murder, enslavement, and torture.

At first, Trump seemed eager to challenge the 36-year-old ruler, whom he mockingly called “Little Rocket Man” on Twitter and denounced in a series of major speeches before the UN and the South Korean National Assembly and in last year’s State of the Union address. But once the two sat down in Singapore over a meal of short rib confit and steamed broccolini, Trump seemed to abandon those strongly held views. By his own admission, human rights were only discussed “relatively briefly.” “It will be discussed more in the future,” he told reporters.

With a second summit scheduled for the end of February, Trump appears no more inclined to press Kim on human rights issues than he was eight months ago. On the campaign trail this fall, he invoked his North Korean counterpart in rosy terms, telling a crowd in West Virginia that the two “fell in love.”

Trump “sees raising the human rights issue in transactional terms—the way he tends to see everything,” says Robert King, a career diplomat who served as former President Barack Obama’s special envoy for human rights issues in North Korea. “As soon as the North Koreans indicated a willingness to talk, he didn’t raise human rights at all, and hasn’t really given much attention to human rights since then.”

With a second summit scheduled for the end of February, Trump appears no more inclined to press Kim on human rights issues than he was eight months ago.

Nowhere is that neglect more evident than in Trump’s failure to fill King’s old position in the State Department, which has been vacant for more than two years. Congress created the position in 2004 as part of the bipartisan North Korean Human Rights Act. Once King retired, Trump’s first secretary of state, Rex Tillerson, eliminated the special envoy role as part of a department-wide reorganization. That decision didn’t sit well with Congress, which has repeatedly voted across party lines to boost the special envoy’s authority. After the George W. Bush administration made the position part-time for a few months, Congress mandated in 2008 that it be full-time. In July, the House and Senate unanimously reaffirmed the special envoy’s responsibility to produce an annual report no later than 180 days after the law’s “enactment” that recaps its activities over the past year. With no special envoy in place, that deadline passed last month. “Although the Administration has not yet designated a Special Envoy, human rights remains a key aspect of our North Korean policy,” a State Department spokesperson told Mother Jones in an emailed statement.

Without a senior government official tasked specifically with addressing human rights in North Korea, the issue has been sidelined in favor of a single-minded push for denuclearization. At the UN, where King had been active as a voice in gathering international support to condemn North Korea’s crimes against humanity, the United States withdrew its annual bid in December to hold a Security Council meeting on the regime’s human rights record. (Nikki Haley, then in her last days as UN ambassador, had said during her confirmation hearing that it was “up to us to bring up that conversation” about North Korea.) In a speech last week at Stanford University, Stephen E. Biegun, the administration’s envoy to North Korea, acknowledged that the two countries “have dramatically different views on individual rights and on human rights” but said Trump is “unconstrained by the assumptions of his predecessors” and “not seeking to topple the North Korean regime.” (Because the countries do not have formal diplomatic relations, the United States has an envoy, not an ambassador, to Pyongyang.)

The subtle shift in policy has frustrated outside groups that advocate for human rights. John Sifton, the Asia advocacy director at Human Rights Watch, recalls pressing staffers on the National Security Council to incorporate human rights into the negotiating strategy before the Singapore summit. Even though staff members were “entirely receptive” to his argument, he says, they were not able to assure him that Trump, Secretary of State Mike Pompeo, and other negotiators would follow through.

The problem is not unique to the Trump administration. “Everyone says they care about human rights in North Korea—but when it comes to action, people get soft,” Sifton says. “This was true under Bush, then Obama, and now Trump.” Sifton says his organization has doubled down on outreach to Republicans in Congress, who are more likely to have Trump’s ear. “This is something Republicans actually care about,” he says. Indeed, two of the most outspoken lawmakers on this issue are Sens. Marco Rubio (R-Fla.) and Ted Cruz (R-Texas).

Outside of the obvious moral imperative to hold North Korea accountable for its human rights record, advocates like Sifton and King believe the administration is neglecting the practical need to use human rights as part of negotiations. In 2016, Congress passed a North Korea sanctions package on an overwhelming bipartisan vote. The measure does not allow the president much room to waive sanctions solely on the basis of denuclearization. North Korea must also improve its human rights record and curb its cyberwarfare tactics before winning relief from US sanctions, to say nothing of international ones. That gives Trump leverage to compel Kim to curb his regime’s abuses of North Korean citizens. But Trump seems to be forfeiting that leverage by ignoring human rights and focusing exclusively on denuclearization.

“It’s almost like fighting with one hand behind your back not to incorporate the human rights issues into the negotiations,” Sifton says.