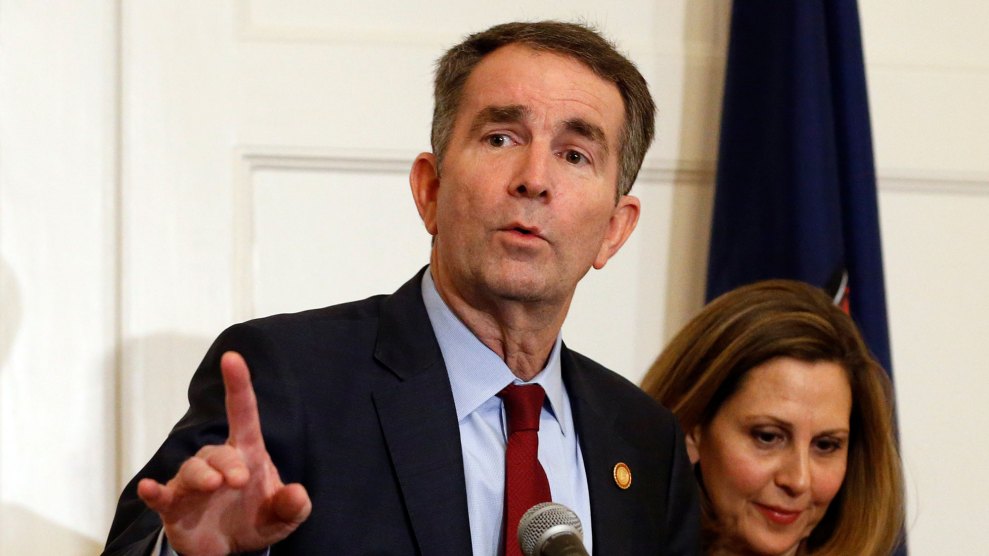 Virginia Gov. Ralph Northam, left, gestures as his wife, Pam, listens during a news conference in the Governors Mansion at the Capitol in Richmond, Va., Saturday, Feb. 2, 2019. Steve Helber/AP

Virginia Gov. Ralph Northam announced Saturday that he will not resign, claiming that he was not the person wearing blackface in a photo from his medical school yearbook page. He defended his decision to stay in office by saying that he had actually once dressed up in blackface—putting shoe polish on his face to impersonate Michael Jackson to moonwalk for a dance party in San Antonio in 1984—and he remembered the moment vividly. But he said he had no memory of the photo in the yearbook and that he’d never seen the yearbook until yesterday.

On Friday, a conservative news outlet published a photo of Northam’s page in his Eastern Virginia Medical School yearbook that included a picture of two men, one in blackface and the other wearing a Ku Klux Klan robe. After the news broke, Northam publicly apologized for the photo, and within hours, virtually every Democrat in the state, plus Democratic presidential contenders, called for him to resign. But on Saturday, Northam decided after talking to classmates and family members that he was not the student in the photo. “I believed then and now that I am not either of the people in that photo,” he said.

The governor noted that the yearbook from that year included a number of photos of students in blackface, so it was not uncommon at the time, and he believed that photos had been mixed up before ending up on his page. “If I had stood beside a costume of the KKK, I would remember that, but I have no recollection at all,” he said. “I remember the dance party from San Antonio like it was yesterday. I have learned from that.”

Northam said he could not in good conscience resign and abandon his work as governor, while recognizing that his relationship with his constituents going forward was damaged. “If I were to listen to the voices calling on me to resign today, I could spare myself from the difficult path that lies ahead,” he said, explaining that he would commit himself to talking about racism and other important issues as he served out the rest of his term. “Like Virginia, I have also made significant progress in how I approach these issues. I am far from perfect, and I can always strive to do more.”