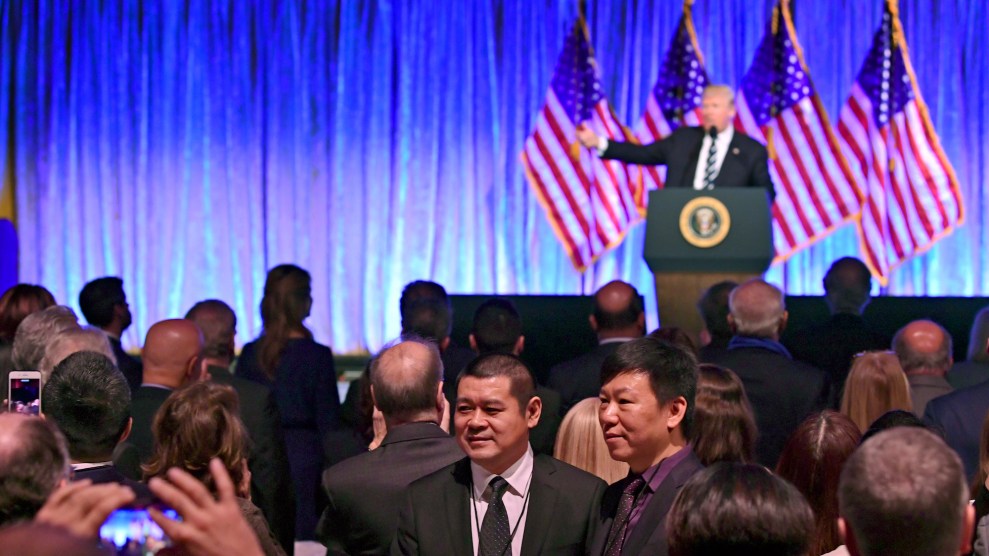 The head of a national organization of Asian American Republicans said he can’t “rule out” the possibility that Chinese citizens illegally used American straw donors to funnel cash to the Trump campaign at events in which his group participated.

“I always have this concern about compliance,” Cliff Zhonggang Li, the executive director of the National Committee of Asian American Republicans, told Mother Jones in an interview. “I don’t know if they contributed indirectly or not,” he said, referring to Chinese citizens.

Li has been a political mentor to Cindy Yang, 45, the massage parlor entrepreneur who, through a separate company she set up in 2017 with her husband, offered access to President Donald Trump and his family at Mar-a-Lago and in Washington. Li said he introduced Yang to a network of conservative-leaning Chinese Americans in Florida and elsewhere and worked closely with her from 2015 until last year.

The Miami Herald reported Saturday that Yang had arranged for a group of Chinese business executives to attend a December 2, 2017 fundraiser for Trump at Cipriani restaurant in Manhattan. Li told Mother Jones that Yang, working as a volunteer for his group, brought 20 to 30 people to the fundraiser. He said Yang’s guests were part of a group of more than 100 Chinese Americans and Chinese citizens who were present at the event, which was reportedly attended by roughly 400 people. It is legal for people who are not American citizens or green card holders to attend political fundraisers, but they are barred from contributing to campaigns, either directly or indirectly through American donors.

Li said he did not know that wrongdoing occurred. And no evidence has emerged that Yang or any attendees or donors to the fundraiser violated campaign finance laws. But Li said that he believed Chinese executives who attended may have lacked green cards or US citizenship, and that he was concerned that some attendees might have funneled illegal donations through American straw donors. He noted that he was especially worried about attendees who were not part of the group Yang brought. But he said he could not rule out similar issues among the contingent that she worked with. “I couldn’t vet everyone,” he said. “I wouldn’t rule out the possibility of wrongdoing.”

Li emphasized that he was not asserting that Yang broke the law. But “nobody can really investigate everyone to make sure that there was no indirect under the table contribution,” he said. “She was bringing people from outside the Asian GOP into this event. I just don’t know.” Mother Jones could not confirm the total amount raised by the fundraiser or the identities of many of the Chinese nationals who attended.

Li told Mother Jones that Yang, who he called a “great event organizer” but a “political novice” and “self-promotor,” had “managed that event for the Asian GOP” and had arranged the attendance of some, though not all the Chinese executives at the event. He said that he and Yang agreed last year—in either March or April—that she would be “gradually dismissed” from a fundraising role with his organization due to differing views on fundraising, including whether to invite foreign citizens to fundraising events. That practice is legal as long as the guests don’t pay, but Li said he decided last year to cease it. “We both agreed that she should no longer do fundraising under the name of Asian GOP,” he said. (Yang instead began fundraising for Republican politicians through a corporation, called the Women’s Charity Foundation, that she created, according to Li.) He also confirmed that he had dismissed Yang this week from her position as a community outreach volunteer for the National Committee of Asian American Republicans, because her recent notoriety created a distraction.

Li said his group generally does not raise money but rather encourages a network of mostly Chinese American donors to give directly to candidates or political action committees. He also said that Yang, like him, acts as a political bundler. That is, she helps arrange for other people to donate to candidates she supports.

Mother Jones recently reported that Yang, who founded a chain of massage parlors in South Florida, had in 2017 formed a new company, GY US Investments LLC, that offered clients the “opportunity to interact with the president…and other political figures,” including at the president’s private club, Mar-a-Lago. The company’s now-disabled website showed Yang and apparent clients with a host of GOP notables and Trump family members, including the president’s sons, Donald Jr. and Eric, his sister Elizabeth Trump Grau, and Trump cabinet members such as Transportation Secretary Elaine Chao.  Mother Jones subsequently reported that Yang held senior roles in two groups with links to China’s Communist Party, including one widely described as a vehicle for projecting Chinese influence in the West.

Foreign influence efforts have become a major focus for federal investigators. House Intelligence Committee Chairman Adam Schiff (D-Calif.) told reporters this week that Congress should probe Yang’s activities and that Democratic committee chairs planned to discuss who would take the lead. “We have a profound interest in making sure that the policy of the United States is not up for sale,” he said. His committee is one of several congressional panel’s examining foreign influence in US elections. Special Counsel Robert Mueller’s office and federal prosecutors in the Southern District of New York also are investigating whether foreign citizens funneled cash to Republican fundraising committees. Last August, Samuel Patten, a Republican lobbyist, pleaded guilty to arranging a $50,000 donation through a straw donor to Trump’s inaugural committee in order to help two Ukrainians—one an oligarch and member of parliament and another who had suspected ties to Russian intelligence—obtain tickets to the inauguration. The Justice Department is also investigating whether a fugitive Malaysian businessman funneled a $100,000 donation to the Trump Victory committee in December 2017, the Wall Street Journal reported Wednesday.

The Trump campaign did not respond to requests for comment. A White House spokesman said earlier this week that Trump “doesn’t know” Yang, but the spokesman declined to say if the president was concerned about her company’s efforts to sell access to him and his inner circle.

Blair Ellis, a Republican National Committee spokeswoman, previously confirmed to the Washington Post that Chinese nationals attended the December 2017 fundraiser but said the group maintains “strict compliance with the law and have a zero-tolerance policy toward anyone who attempts to take advantage of the system in order to attend our events.” On Monday, the RNC said in a statement that Trump Victory “only accepts contributions from American citizens in accordance with the law. We vehemently deny any wrongdoing on the part of the RNC or the Trump campaign.”

Yang has not responded to repeated inquiries, but her lawyer issued a statement Thursday broadly denying unspecified “abhorrent allegations” against her. “At this time, the evidence indicates that our client has been falsely accused in a manner that she may never recover from,” Evan Turk, her attorney, said. “Her name, her reputation and her honor have been destroyed. Cindy Yang seems to be another casualty, as a supporter of our president.”

Representatives from the law firm declined to specify what they believed Yang was falsely accused of or to provide additional information.

Li said the December fundraiser was among events that caused him concern that supporters of the National Committee of Asian American Republicans may have violated campaign finance laws deliberately or due to unfamiliarity with the rules. He said that for his group, made up of Chinese Americans (many of them first-generation Americans with varied views on the Chinese regime), “having Chinese citizens in our events” caused questions and “some very ill feelings.”

Chinese executives who visit the United States are often wealthy, Li noted. “I don’t want to see that money somehow get funneled into the political process here,” he remarked. He said that the Chinese American community he works with is composed of politically inexperienced people “with a weaker sense of compliance and also not that good a sense of campaign finance law.”

“That caused some weaknesses,” he said, and perhaps “even intentional violations.”

Li said that in the wake of the December fundraiser, he had changed procedures at his group to bar people who lack green cards or US citizenship from attending fundraisers. He said he also pushed the group towards grassroots organizing and away from fundraising. Yang and he differed on these matters. “She doesn’t see the need for a more stringent policy,” Li said.

Li said he is a worried the publicity Yang has received will increase the reluctance of Chinese Americans to participate in politics. And he said he wanted stress that any possible violations of campaign finance laws are not the norm in the community he works with. “Not everyone is doing that,” he said. “A few bad apples are doing a bad thing.”