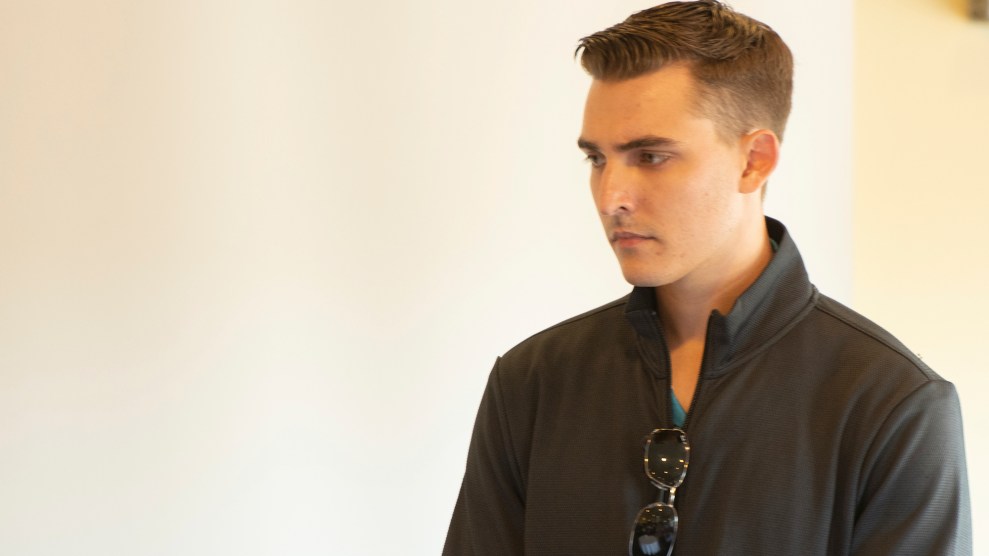 Jacob Wohl waits to speak to the media about allegations against Robert Mueller in November.John Middlebrook/ZUMA

Conspiracy theorist Jacob Wohl has spread rumors that Supreme Court Justice Ruth Bader Ginsburg is dead. He’s been banned from Twitter for making fake 2020 presidential campaign accounts in an attempt to manipulate the election. He’s been referred to the FBI for hatching a bizarre plot to allegedly catfish special counsel Robert Mueller by paying women to make sexual misconduct claims against him. And apparently he maintains a close relationship with the White House communications director and his wife.

Wohl tells Mother Jones that Bill Shine, a former co-president of Fox News and current White House deputy chief of staff and communications director, and his wife, Darla, are “big fans” of his. Last week, Darla Shine was spotted greeting Wohl warmly at a gathering of conservatives. The White House didn’t respond to requests for confirmation of the Shines’ relationship with Wohl, but if Wohl’s depictions are accurate, then one of the country’s most notorious conspiracy theorists may have the ear of a member of President Donald Trump’s innermost circle.

Wohl spent several hours Thursday and Friday loitering with right-wing activist Laura Loomer in the hotel lobby outside the Conservative Political Action Conference, one of Washington’s largest annual conservative political gatherings. On Thursday, the pair held a press conference to release the results of their investigation into Rep. Ilhan Omar (D-Minn.), a Muslim member of Congress who Wohl alleged had secretly married her brother in an attempt to commit immigration fraud. The claim is so far into tinfoil-hat territory that even CPAC—which has in the past been sponsored by the John Birch Society and hosted far-right fringe speakers—apparently wouldn’t let Wohl into the conference to make his dubious announcement.

Nonetheless, at a CPAC afterparty that evening, Darla Shine reportedly gave the young activist a warm reception at the bar. Jared Holt, a research associate at Right Wing Watch, a news site published by the liberal advocacy group People for the American Way, was also at the party. Hosted by the campus conservative group Turning Point USA, the party featured guests such as Donald Trump Jr.; his girlfriend, Kimberly Guilfoyle; and Sen. Ted Cruz (R-Texas). Wohl was there, too. Holt wrote that at the afterparty, “Wohl was enthusiastically greeted by Darla Shine,” and that later, Wohl told him that Shine “helps him out.”

The next day, I ran into Wohl in the hotel lobby and asked him about his relationship with Darla Shine. He confirmed that he’d been hanging out not just with Darla, but also with her husband, Bill, at the Turning Point party and then later at the Trump International Hotel for an after-afterparty. Wohl declined to offer any specifics of how Darla Shine might be helping his work, although he said she “certainly was not up in Minnesota” assisting with his investigation into Omar. Wohl said he didn’t want to “discuss overtures with administration folks” but knows the Shines through his father, David Wohl, an Orange County, California, criminal defense attorney who frequently appears on Fox News. “They go back,” he told me. “I just think [Darla] thinks Laura and I are young, aggressive conservative activists and personalities and, generally speaking, she’s a fan.”

Until recently, Darla Shine was mostly known for blogging about parenting and housekeeping, but she’s also spread her share of misinformation. In 2008 and 2009, she hosted a radio show in which she promoted conspiracy theories about President Barack Obama, FEMA camps, vaccines, sunscreen—she thinks it’s a hoax—and UFOs. (On the show, she interviewed people who claimed to have been abducted by aliens.)

Later, she moved to social media, where her posts have been filled with conspiracy theories, racially charged commentary, and vigorous defenses of Trump. Shine has frequently complained on Twitter about the use of the N-word in rap lyrics, suggesting that if white people couldn’t use the word, black people shouldn’t be able to put it in songs, either. She has criticized black athletes and celebrities for failing to speak out about black crime and has shared links to stories about white people being murdered by black assailants with comments like, “where is black lives matter?” After Trump referred to Haiti and some African nations as “shithole countries,” Shine tweeted a racist meme that contrasted the alleged lack of progress in African development with the wonders of ancient Rome.

Darla Shine deleted her Twitter account as soon as Bill Shine officially joined the Trump administration, but I saved all her tweets — here's a sampling of her hot takes https://t.co/BUs9RQ1i7A pic.twitter.com/TGTNVbROX2

In 2015 at the University of Oklahoma, two members of the Sigma Alpha Epsilon fraternity were expelled after video surfaced of them singing on a bus to a frat event, “There will never be a n—– at SAE. You can hang them from a tree, but they’ll never sign with me.” After the news broke about the expulsions, Shine tweeted, “At FSU u can punch a girl in the face & only get kicked off football team but sing a song with the N word in it & you’re expelled at Oklahoma.” (She was referring to black ex-Florida State University quarterback De’Andre Johnson, who was captured on video punching a woman in a bar and was later kicked off the football team.)

In another tweet, she blamed pharmaceutical companies for the mass murder of nine African American churchgoers in Charleston, South Carolina, in 2015 instead of the white supremacist who actually killed them. “Yes Lets blame the Confederate Flag instead of Big Pharma and the psychiatric violence inducing Suboxone Dylan [sic] Roof was taking,” she wrote.

Shine deleted her account last summer, when Trump appointed her husband to be White House communications director, but not before Mediaite reporter Caleb Ecarma screenshotted the most noxious tweets. The social-media hiatus was short-lived, though, and Shine rejoined Twitter in October. Last month, she used her account to issue a tweetstorm of anti-vaccination rhetoric in the wake of several deadly measles epidemics around the world. Among other things, she falsely claimed that childhood illnesses like measles and mumps “keep you healthy & fight cancer.”

I had the #Measles #Mumps #ChickenPox as a child and so did every kid I knew – Sadly my kids had #MMR so they will never have the life long natural immunity I have.

Come breathe on me!

For all his outlandish theories, Wohl isn’t an anti-vaxxer. “I’m like the most pro-vaccine guy there is,” he told me. Nonetheless, he thinks Shine “is wonderful. She is a wonderful person. As is her husband Bill. They’re just two salt-of-the-earth, wonderful people. They’re big fans.”