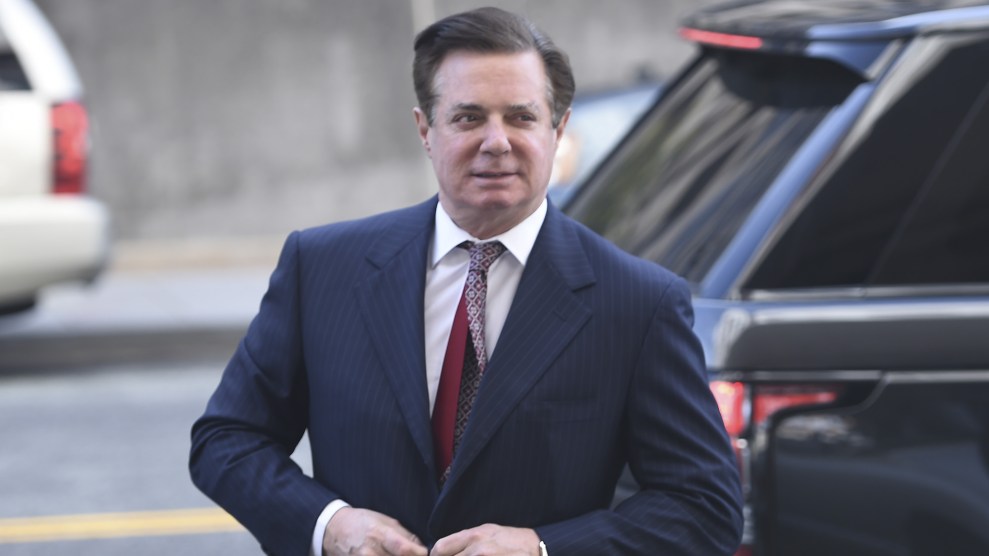 Paul Manafort arrives for a hearing at US District Court on June 15, 2018.Brendan Smialowski/AFP/Getty Images

US District Court Judge Amy Berman Jackson sentenced former Trump campaign chairman Paul Manafort to more than six years in prison on conspiracy and obstruction of justice charges on Wednesday. When coupled with the sentence recently handed down by a judge in a separate case, Jackson’s ruling means that Manafort is facing seven-and-a-half years behind bars.

Jackson could have given Manafort as much as 10 years.

Jackson sentenced Manafort to five years for conspiring defraud the United States by failing to disclose his lobbying work for Ukraine’s former pro-Russia President Viktor Yanukovych and for hiding the proceeds from that work to avoid taxes. Jackson gave Manafort an additional 13 months for obstructing justice by attempting to convince potential witnesses in the case to lie.

During Wednesday’s proceedings, Manafort—his hair gray and longer than in prior court appearances—addressed the court from a wheelchair, which his lawyers have said he needs due to gout. “I am a different person than the one who came before you in October of 2017,” he told Jackson prior to learning the sentence.

“This case has taken everything from me” he added, referring to his properties, cash, life insurance, and trust accounts for his children and grandchildren. “Please show compassion,” he said. “Please let my wife and I be together.”

“I am sorry for what I have done and for all the actions that have gotten me here today,” Manafort told the court. “I accept responsibility for the acts that have caused me to be here.”

Jackson said she did not find Manafort’s pleas persuasive, noting that he and his lawyers continued to downplay the seriousness of his crimes, portraying his failure to disclose his work for Yanukovych and others as a paperwork error. “What you were doing was lying to members of Congress and the American public,” she said. Manafort’s secret lobbying, Jackson said, “undermines our political discourse and infects our policymaking.”

Jackson excoriated Manafort for his dishonesty, in particular for efforts to mislead her and the prosecutor even after he had agreed to cooperate with prosecutors. “The dissembling in this courtroom began in the bond proceeding and it never abated,” Jackson said. Jackson said she believed Manafort’s claims of commitment to his family, but she said that his crimes were intended to “sustain a lifestyle at the most opulent and extravagant level possible. More houses than a family can enjoy. More suits than a man can wear.”

Jackson’s sentence comes after Manafort received a 47-month prison term from US District Court Judge T.S. Ellis for separate tax and bank fraud convictions. Ellis departed from sentencing guidelines under which Manafort could have received up to 20 years and drew controversy by saying that Manafort—a longtime lobbyist for autocrats—had lived an “otherwise blameless’ life.” Jackson will allow Manafort to serve portions of the two sentences simultaneously, meaning that Manafort’s total sentence amounts to just over seven-and-a-half years.

Jackson found last year that Manafort had violated his bail by attempting to influence the testimony of witnesses in his case, actions that led to his guilty plea on the obstruction charges. She also found that Manafort had violated a cooperation deal he struck last fall with Special Counsel Robert Mueller by lying about matters that prosecutors said “go to the heart of what the special counsel’s office is investigating.” One of the issues he lied about was his discussions with Konstantin Kilimnik, his longtime Ukrainian business associate, who the FBI says has ties to Russian intelligence. Manafort shared Trump campaign polling data with Kilimnik and discussed with him—both during the campaign and as recently as last year—a “peace plan” for Ukraine that involved the United States dropping economic sanctions on Russia.

Jackson emphasized that her ruling did not bear on whether the Trump campaign conspired with Russia. And she blasted Manafort’s lawyers for raising the argument that prosecutors charged Manafort with unrelated crimes only after failing to find collusion. “Saying ‘I’m sorry I got caught’ is not an inspiring plea for leniency,” she said.

Jackson suggested Manafort’s lawyers were making those claims in hopes of winning a pardon from President Trump. “The no collusion mantra is simply a non-sequitur,” Jackson added, noting that she had already made it clear such arguments would not influence her. “It was being repeated for the benefit of some other party,” she said.

Minutes after Manafort’s sentencing, the Manhattan District Attorney’s office announced that a grand jury in New York had indicted Manafort for mortgage fraud and related crimes. The charges stem from a “yearlong residential mortgage fraud scheme through which Manafort and others falsified business records to illegally obtain millions of dollars” the DA’s office said.