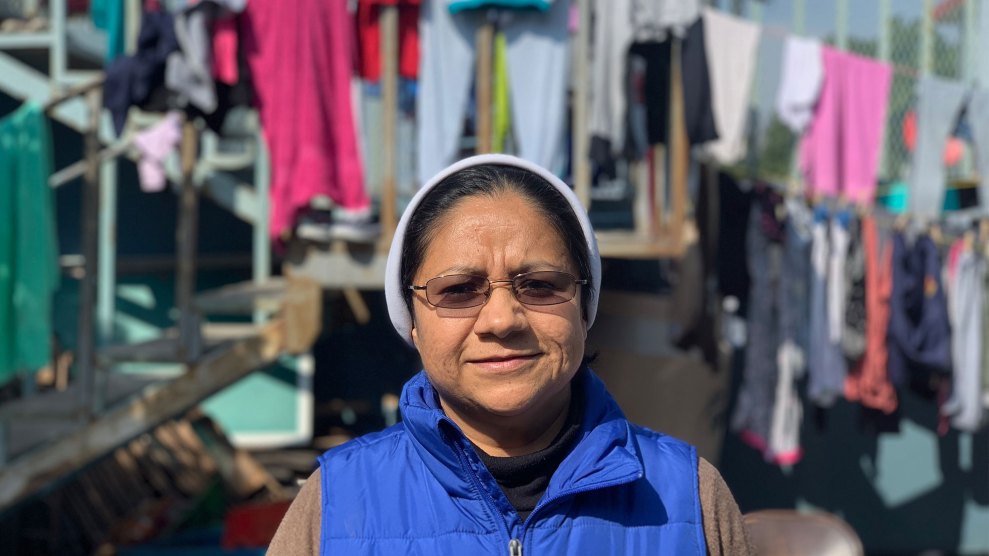 Sister Salome Limas says she recently added a new category to the intake ledger at the women’s shelter in Tijuana. She pulls out a large book, opens it up, and points to the words “Returned to Mexico,” written in Spanish with the most perfect penmanship.

These women are among tens of thousands who have left Central America in the past five years and are seeking asylum in the United States. Most of the women at Instituto Madre Asunta in Tijuana, Limas says, are fleeing violence. “There are a few here that have scars and marks on their bodies that show how much they’ve suffered,” she tells me. “Most of them have children, and they want to make sure their kids don’t end up with the same scars, physical or emotional, so they’ll do whatever it takes to give them a better life.”

Listen to Fernanda Echavarri describe how Tijuana has become the center of a border crisis of the Trump administration’s making.

Even if it means waiting for months in Mexico for a shot at applying for asylum, spending time in immigration detention in the United States once they present themselves at the border, or risking it all by crossing illegally and ending up deported.

Since 2014, the number of “family units,” as they are called by US immigration officials, has been on the rise, reaching record numbers this year. Data from US Customs and Border Protection shows a 338 percent increase in the apprehension of family units at the border so far in fiscal year 2018-19. According to CBP, 136,150 family units were apprehended along the US-Mexico border since October, up from 31,100 at the same time last fiscal year.

“Most of them have children, and they want to make sure their kids don’t end up with the same scars, physical or emotional, so they’ll do whatever it takes to give them a better life.”

Limas, a nun and a social worker, says that in the six years she’s been at the shelter for women and children, there’s never been more need than right now.

“The greatest emergency is in the shelters, because they’re oversaturated and there are people from another caravan who are already starting to arrive,” she says. “Plus, [there’s] now this new group”—the women sent back to Mexico to wait out their asylum hearings after presenting themselves to US immigration officials.

The shelter, which once housed 45 women and their children, recently had 130 people in need of refuge. Last week, most of the women there were moms with young kids, and a handful of them were pregnant. There were a couple of moms from Haiti and Mexico and a woman from Ghana, but the majority were from Guatemala, El Salvador, and Honduras.

The influx is the result of several factors. First, the “metering” policy that US immigration officials implemented last summer to limit the number of people who can apply daily for asylum caused a huge bottleneck, making families wait for months before they could even present themselves at legal ports of entry. Then, the arrival of migrant caravans from Central America last fall brought thousands more to Tijuana. Finally, the implementation of the Remain in Mexico policy began January 28 and forced Central American migrants to return to Mexico after filing an initial asylum claim at the port of entry and wait for their immigration court date—which often could take months.

Some of these women may never get asylum in the United States, thanks in part to a change in US policy last summer. In June 2018, then-Attorney General Jeff Sessions made it nearly impossible for victims of domestic violence to qualify for asylum, even as gender-based violence in Central America continued to rise.

The shelter, which once housed 45 women and their children, recently had 130 people in need of refuge.

On the day I visit the shelter, two of the women there had been returned to Mexico and told to wait there until late March. They say they asked for asylum at the border with their kids and were detained in a freezing room for about six days. They tell Limas they weren’t sure exactly how long they were detained, but that it was brutally cold. They were asked a few questions by US immigration officials, including whether they had been part of the caravan.

“They tell me they’ve been separating the ones who say they were with the caravan,” Limas says. She isn’t sure if it was a coincidence, but she says all the women who were returned under this policy and passed through this shelter in the last month told her they were part of the caravan.

Limas worries about the coming months, when more and more people are expected to arrive in Tijuana in the hopes of applying for asylum. The city is already overwhelmed, and so are its shelters. Instituto Madre Asunta receives a small percentage of its budget from Mexican federal aid, but since the beginning of the year, Limas says she hadn’t received much help. A couple years ago when Tijuana saw an unusual spike in Haitian migrants, Limas says there were emergency resources allocated to different shelters in the city. That’s not happening today.

In the afternoon, as Limas shows me around the shelter, she zigzags to avoid the little kids roaming the hallways. She shows me the classroom where children have school a few days a week and opens the closet in the infirmary to show me the boxes of donations they’ve received recently, pointing out that even with all this help—from the local community, from Latinos in the United States who’ve driven down to deliver supplies, from international organizations like UNICEF—it’s hard to provide services to all the women in need.

“When a mom is worried about where she and her kids will sleep that night or where their next meal will come from, she can’t take care of the bigger stuff.”

The sound of kids laughing and playing is nonstop, although I notice two women quietly crying in the kitchen. Limas and the staff at the shelter do their best to keep track of which women are next on the waitlist to apply for asylum. She tries to check in with them to make sure they’re doing okay and that their children feel some sort of stability.

“When a mom is worried about where she and her kids will sleep that night or where their next meal will come from, she can’t take care of the bigger stuff,” Limas tells me. “So what gets me up in the morning every day is knowing that I can help in some way.”