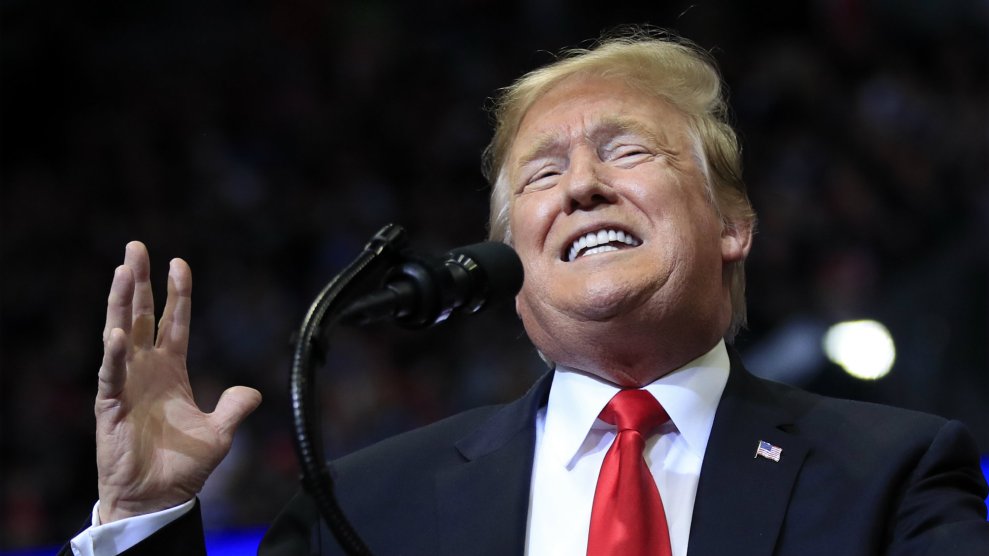 President Donald Trump announced on Twitter Saturday morning that a US Navy SEAL accused of war crimes would be moved to “less restrictive confinement” while he awaits trial on murder charges. Trump’s statement came one day after GOP Rep. Ralph Norman (S.C.) appeared on Fox & Friends—a show that Trump frequently watches and tweets about—to express concerns about the conditions in which Special Warfare Operator Chief Eddie Gallagher was being held.

On Friday, several hours after appearing on Fox, Norman tweeted that he had spoken to Trump about that matter and that Trump had agreed to move Gallagher.  Trump referenced both Norman and Fox & Friends in his Saturday tweet.

In honor of his past service to our Country, Navy Seal #EddieGallagher will soon be moved to less restrictive confinement while he awaits his day in court. Process should move quickly! @foxandfriends @RepRalphNorman

Gallagher has been held in a naval brig in San Diego since his arrest in September. He denies the allegations against him. As CNN explains:

Gallagher has been charged with various violations of the Uniform Code of Military Justice while deployed to Mosul, Iraq, in 2017. He has been accused of stabbing and murdering a wounded person, shooting at noncombatants and posing for a photo and performing his re-enlistment ceremony next to a dead body.

Earlier this month, 18 House Republicans, including Norman, wrote to Navy Secretary Richard Spencer to raise concerns about Gallagher’s detention. They alleged that Gallagher had insufficient access to his defense counsel and was being deprived of adequate food and medical care. They also complained that Gallagher and other pre-trial detainees were being improperly intermingled with inmates who have been convicted of serious crimes. On Thursday, 40 lawmakers called for Gallagher to be moved to a less restrictive setting.

On Fox & Friends Friday, Norman said he’d first learned about the case when he saw Rep. Duncan Hunter (R-Calif.)—who is currently under indictment for allegedly misusing campaign funds—discuss it on Fox. Hunter has called for the case against Gallagher to be dropped entirely, saying, “There’s a reason we’re not winning these wars, and it’s because we go after our own guys,” according to the Navy Times.

This is not the first time Trump has publicly contemplated intervening on behalf of a service member charged with murder. In December, he tweeted that he would review the case of Maj. Matt Golsteyn, whom he called a “military hero.” That tweet also referenced Fox News.

At the request of many, I will be reviewing the case of a “U.S. Military hero,” Major Matt Golsteyn, who is charged with murder. He could face the death penalty from our own government after he admitted to killing a Terrorist bomb maker while overseas. @PeteHegseth @FoxNews