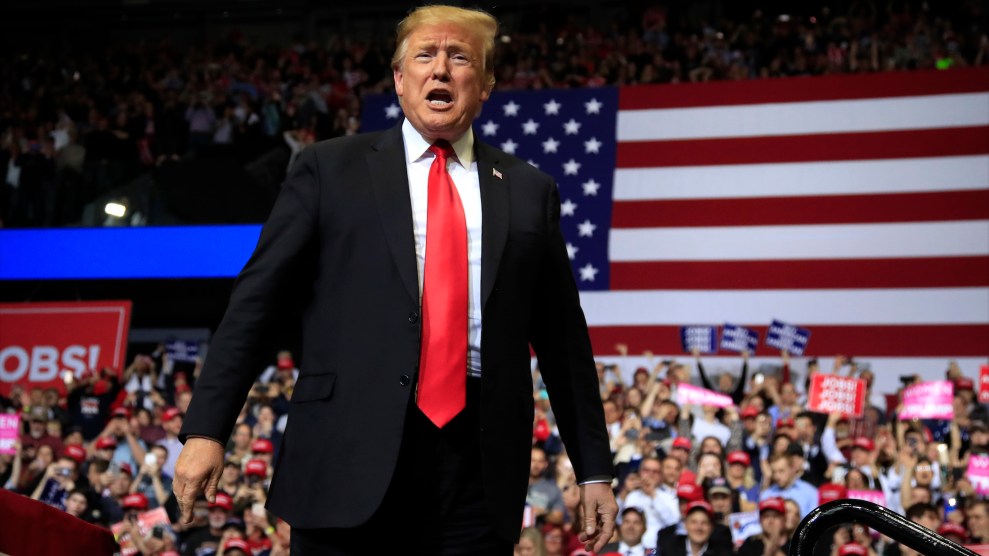 President Donald Trump is, once again, threatening to shut down the southern border. It is at least the seventh time he has done so on Twitter since October.

But for the first time, Trump is getting specific. He tweeted on Friday morning that he will close the border “next week” if “Mexico doesn’t immediately stop ALL illegal immigration.” There’s no way Mexico can stop all migrants from traveling north, so Trump will either have to back down again or make good on this threat.

….through their country and our Southern Border. Mexico has for many years made a fortune off of the U.S., far greater than Border Costs. If Mexico doesn’t immediately stop ALL illegal immigration coming into the United States throug our Southern Border, I will be CLOSING…..

….the Border, or large sections of the Border, next week. This would be so easy for Mexico to do, but they just take our money and “talk.” Besides, we lose so much money with them, especially when you add in drug trafficking etc.), that the Border closing would be a good thing!

Lou Dobbs — a sometime WH adviser whose show President Trump watches regularly — and his guests were urging President Trump to follow through and close the border last night. pic.twitter.com/hSEeJOsqTT

From last night’s edition of Fox News’ Hannity, Rush Limbaugh: “I think the president should shut the border. If he shuts the border and builds the wall, there is nobody, Sean, who can beat him in 2020.” pic.twitter.com/73s35ErO32

Closing the border would presumably mean shutting down all the official border crossings between Mexico and the United States. But that would do nothing to address the current issue facing border officials: a record number of families crossing between these ports of entry to request protection under US asylum law. Trump tried to stop that from happening in November by banning people from receiving asylum if they crossed the border between ports of entry, but the move, which flouts the plain text of asylum law, was blocked in court.

Asked about Trump’s latest threat on Friday, a senior Department of Homeland Security official mentioned DHS’s previously announced plan to pull some Customs and Border Protection officers from officials ports of entry to assist Border Patrol agents. “I think what the president is making clear is…if we have to close ports to take care of all of the numbers who are coming, we will do that,” the official said. “So, it’s on the table.” The official added, “Right now, our hope is that in working with Mexico and in reallocating resources between the ports that we can start to stem the flow.”

When asked what specifically the Trump administration wants Mexico to do, the official said DHS has “walked through a whole variety of things that they can to do to increase enforcement” such as changing the c0untry’s visa policies. None of those changes will have made much, if any, difference by next week.

Friday is not the first time that Trump has described closing the border as a way of punishing Mexico. In October, Trump took to Twitter to ask Mexico “in the strongest of terms…to stop this onslaught” of migration, adding that he would close the border if it didn’t. The number of migrants crossing the border since then has surged, and the border has remained open.