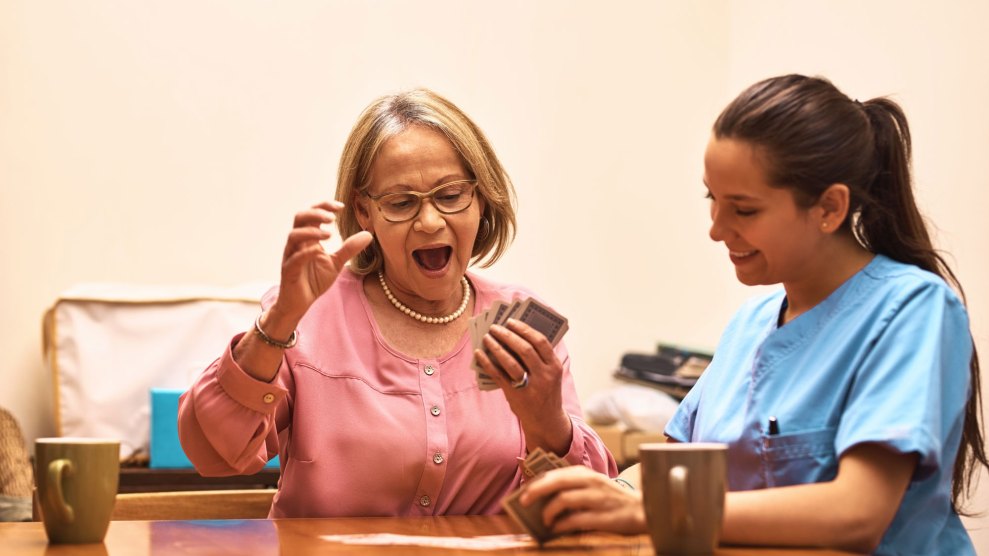 For years, nurses in Washington state have lobbied for uninterrupted breaks during work shifts and protections for overtime. But as state lawmakers debated a bill that would do just that, one Republican state senator asserted that some nurses could spend their time more productively.

State Sen. Maureen Walsh called for an amendment to the legislation to expand breaks for nurses that would exclude small hospitals. Her reasoning? “I would submit to you that those nurses probably do get breaks,” she said on the state Senate floor. “They probably play cards for a considerable amount of the day.” The state Senate approved the amendment but the bill not been finalized.

Trust me, nurses haven’t earned the title "most trusted profession" for seventeen years running by "playing cards" on our shifts. WA Sen. Maureen Walsh should be ashamed to use #nurses to score cheap political points like this. #1U #nurseslife pic.twitter.com/ucm89ezpDj

It didn’t take long for nurses to strike back. In a blog post, the Washington State Nurses Association denounced Walsh’s remarks as “incredibly disrespectful and patronizing,” arguing there was “zero logic” to giving only some nurses protections but not all. Mathew Keller, the organization’s director of nursing practice, noted in the post that it was already difficult to recruit nurses to rural hospitals, so excluding them from getting covered by the bill “would just make it worse.”

“No, Senator, nurses are not sitting around playing cards,” he wrote. “They are taking care of your neighbors, your family, your community.” And many took to Twitter to show what a nurse’s life is really like and slam the senator’s remarks.

As a nurse for 17yrs, I can assure Senator Walsh we’ve never had time to play cards. She’s clueless! #nursesdontplaycards https://t.co/SKRw2cRvqQ

1 years worth of flashcards in a nursing degree. Never had a single chance to even look at them at a clinical site. These are the cards it takes to simply learn enough base knowledge so we never play cards with someone’s life. #nursesdontplaycards pic.twitter.com/nQBZ4LXYdG

#nursesdontplaycards We hold the hands of family members & comforted their loved ones as they were dying. We catch medication errors that wud have killed someone then call the pharmacy & MD n raise hell. We arrange transportation, appointments & throw stellar bean bag parties. https://t.co/dJ8RIqCZ11

I’ve never played cards during any of my shifts. What I have done is gone home & finally get to eat/drink/pee & then go to sleep to get up to work another 12 hours without a break. I spend my nights, holidays, weekends caring for your loved ones. #nursesdontplaycards pic.twitter.com/723FE9gzt1

What an ignorant thing to say. I have gone entire 12 hour shifts that sometimes turn into 14 hour shifts without a break. And when I do get a break— I sit within earshot of the nurses station so I can hear cardiac monitors and bed alarms. #maureenwalsh #nursesdontplaycards https://t.co/s93ucY0D2t

We keep secrets w/ no judgment. We honor wishes & protect autonomy. We wipe tears of strangers & hug broken human spirits. We are calm in the face of fear. We are comfort in the midst of pain. @Gallup ranks #Nurses as most trusted profession. #NursesDontPlayCards #NursesSaveLives pic.twitter.com/4s4AOKp5Cg