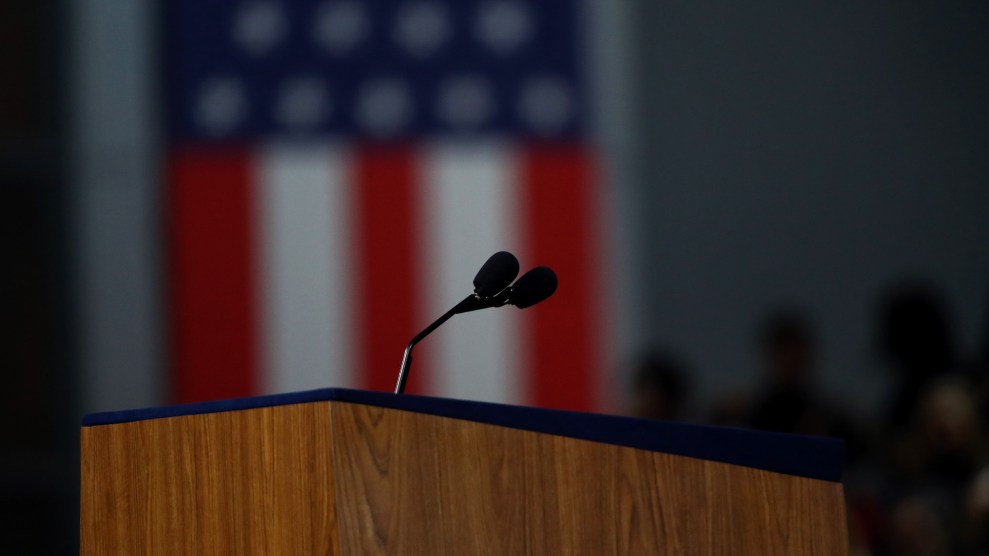 During a CNN town hall last week, California Sen. Kamala Harris pledged that, if elected president, she would quickly sign an executive order requiring a background check for nearly every gun sale. The following morning, her campaign unveiled a list of three additional executive actions she would take if the next Congress fails to pass gun reform legislation within its first 100 days.

Harris’ announcement marked the Democratic contest’s first significant gun policy rollout—an issue that has been largely on the back burner since candidates began entering the presidential race. Only a couple 2020 hopefuls, both long shots, devoted substantial attention to the subject before last week: California congressman Eric Swalwell has dedicated his candidacy to enacting stricter gun laws, and former Colorado Gov. John Hickenlooper has highlighted his record of taking on the NRA.

“That is a huge departure from previous presidential elections.”

Gun reform’s relatively low profile this year marks a significant shift from the last two election cycles, when heightened activism in the wake of mass shootings motivated Democrats to challenge one another to take more aggressive positions in favor of firearms regulation. In some ways, the movement has become a victim of its own success—the so-called Parkland Effect has produced so much Democratic unity around gun reform that there’s no longer much room for the candidates to stand out.

“When it comes to the primary, the expectation is that every candidate on the Democratic side is going to be strong on this issue,” says Chelsea Parsons, vice president of gun violence prevention at the Center for American Progress. “The baseline for what will be acceptable has shifted drastically since the last cycle.”

That shift began during the last Democratic presidential primary, when Hillary Clinton hammered Bernie Sanders for his past votes against a federal background check system and in favor of legislation that bans lawsuits against gun manufacturers. In the wake of nationwide calls for stricter gun laws following the 2018 Parkland shooting, House Democratic hopefuls used gun reform as a wedge issues to distinguish themselves in crowded primaries.

But now, Democrats almost uniformly want to implement universal background checks, ban assault weapons, and enact “red flag” legislation that allows law enforcement to take guns out of the hands of people believed to pose a risk to themselves and others. Candidates who once held pro-gun-rights stances, such as Sanders and New York Sen. Kirsten Gillibrand, have distanced themselves from their past positions.

On the one hand, it’s great news for gun control advocates, says Peter Ambler, the executive director of Giffords, the advocacy organization founded by former Arizona Congresswoman Gabby Giffords, who survived a mass shooting. “Sometimes I just, like, scratch my eyes and am amazed,” Ambler said last month. “That is a huge departure from previous presidential elections, where even Democratic candidates felt the need to credential themselves in some way, shape, or form with a…gun-owner-friendly message.”

On the other hand, it makes it hard for gun control advocates to keep the issue at the center of public debate—something they’re desperate to do as President Trump and the GOP-controlled Senate refuse to enact new firearms restrictions passed by House Democrats.

“One of the dangers of this unanimity is that, without contrast, there’s no debate,” Ambler says. “Without debate, there’s no volume, and people aren’t really talking about it. And if you’re not talking about it, you end up with a new president in the White House that hasn’t spent a year and a half on the campaign trail talking about what he or she will do on gun safety, which is important when you’re trying to actually get them to do something once they’re there.”

A spokesperson for the Brady Campaign, another gun control organization, says the group is working on a policy book for every candidate so the issue is top-of-mind for the would-be nominee. Ambler says Giffords will be looking for ways to elevate firearms policy as a voting issue and ensure that candidates are talking about gun violence in “an authentic, passionate, committed way.”

Gun reform advocates say they were pleased to see Harris—who has been outspoken on the issue during her tenure as California’s attorney general and as a member of the Senate Judiciary Committee—take the lead on the issue. Those familiar with the Harris campaign’s thinking say the policy idea was original to her, and that the gun control groups were consulted to review it as subject matter experts.

What the national advocacy groups likely won’t do is drop a ton of money on independent expenditures for the presidential election. Their financial involvement was a key feature of the 2018 midterms, when they found themselves inundated with donations following the Parkland massacre; for the first time, gun control groups outspent gun rights groups like the NRA. Ambler says the groups’ money can have far more impact in local and statewide contests, and they’ll likely direct it to races with vulnerable Senate Republicans who have opposed gun reforms, such as Colorado’s Cory Gardner and North Carolina’s Thom Tillis.