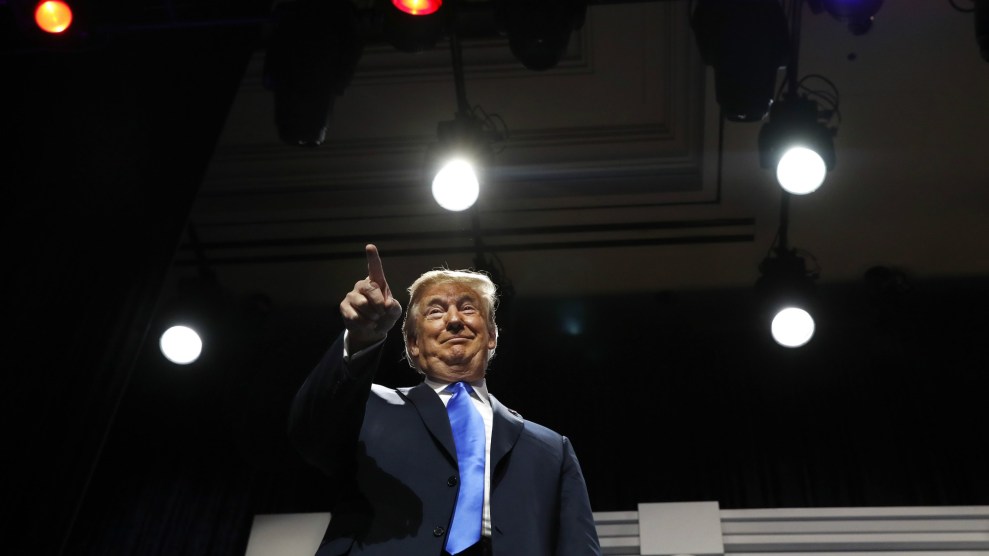 Trump smiles and points at Sheldon Adelson before his speech. Jacquelyn Martin/AP

President Donald Trump appeared in Nevada on Saturday afternoon, addressing the conservative Republican Jewish Coalition, where he mocked Democratic Rep. Ilhan Omar of Minnesota, one of the first two female Muslim Americans to be elected to Congress.

Trump’s trip began on Friday, when he flew to California where he visited the Mexican border, held a Beverly Hills fundraiser, and allegedly dined at one of his golf clubs with Rupert Murdoch. On Saturday, he travelled to Las Vegas where the RJC is holding its annual meeting at the Palazzo, one of two major Las Vegas strip hotels owned by conservative megadonor Sheldon Adelson—who is one of the largest benefactors of the RJC.

In February, it was reported that Adelson is being treated for cancer. While during the 2016 campaign, Trump mocked other candidates for their acceptance of Adelson’s money, on Saturday Adelson not only attended the Trump speech, he wore a bright red Trump yarmulke.

Early in his speech, Trump trained his sights on Omar, who has become a lightning rod for conservative accusations of Democratic anti-semitism after sending a tweet about Republicans accepting donations from the American Israel Public Affairs Committee. On Friday, a federal court revealed that a New York man and self-described Trump supporter, was arrested for allegedly threatening to kill Omar in a call to her office last month. The news came only a day after a separate report that a March public appearance by Omar had been the target of a bomb threat.

But in Las Vegas, Trump showed no interest in lowering tension around Omar.

“Special thanks to Representative Omar of Minnesota. Oh, I forgot. She doesn’t like Israel. I forgot. I’m so sorry." Trump to RJC crowd, singling out Omar one day after a man was arrested for threatening to kill her and calling her a "terrorist."

In fact, Trump laid the blame for anti-semitism in America entirely at the feet of Democrats, telling the audience that, “the Democrats have allowed the stain of anti-semitism to take root in their party.” The president’s remarks were briefly interrupted by members of the Jewish activist organization If Not Now.

Freedom and dignity for all!