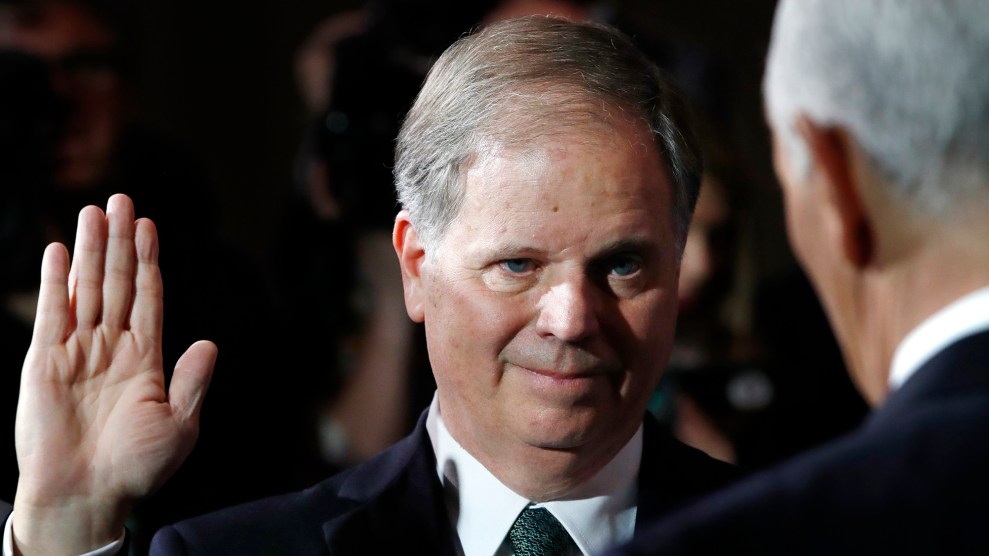 In a nail-biting Alabama special election in 2017 to fill the Senate seat formerly held by Attorney General Jeff Sessions, Doug Jones made history when he narrowly won against former state Supreme Court Justice Roy Moore, who was accused of sexual misconduct, to become the state’s first Democrat elected to the US Senate in 25 years.

Jones’ improbable victory was celebrated nationally by Democrats because it represented a powerful, rare opportunity—the potential for Democrats to regain a foothold in the Deep South.

The senator has been in Congress for a little over a year, during which time he has served on committees that shape policy affecting senior citizens, health care, banking, and defense. He’s kept a relatively low profile, particularly in comparison to the more vocal newcomers Alexandria Ocasio-Cortez and her colleagues, and he has gained a reputation as a champion for voting rights.

Jones, who plans to run for reelection next year, spoke with the Mother Jones Podcast about what he’s learned since taking office and how Democrats can turn the tide in the South. Listen to the full interview on this week’s episode and read on for an edited version of the conversation:

Jamilah King: You’ve been in the Senate 16 months now. Brand new. What are some of the things that have surprised or dismayed you about getting things done in Washington?

Doug Jones: I think what surprised me is there’s actually a fair amount of bipartisanship that goes on here that nobody sees. It’s all done on a person-to-person level or staff level. There’s so many bills that get introduced into the United States Senate that never become law. At the same time, the thing that has dismayed me the most is the fact that on the real critical issues, it seems like people go to their corners and the bipartisanship breaks down.

JK: Some of the freshmen in the House are a bit more vocal than you. What do you think about that?

DJ: I think voices like that are great and ought to be heard. I just come from a different place. I am, by nature, a lot more moderate and a lot more centrist, and I’ve got a lot of experiences under my belt to know that it’s not always the loudest voices that get things done. I ran as someone who wanted to get things done, not somebody who wanted to shake things up. I appreciate those voices of people who want to shake things up, it’s just not where I am.

JK: During your time in the Senate you’ve spoken out repeatedly about voting rights, a huge issue leading into the 2020 presidential election. What role do you think Democrats in the Senate play in statewide efforts to fight voter suppression? The Republicans still control the Senate, after all.

DJ: In Washington, DC, about the only thing that Senate Democrats can do is speak out and continue to raise awareness. I think we’re on the right side of history when it comes to these issues. I’m hoping that not just Democrats, but people of goodwill across the political spectrum will see the importance of easy access to the ballot box, trying to get our voter participation up as high as it can go so that Democrats and Republicans compete for those votes, not just take things for granted.

JK: A lot of folks have said there’s a tide turning in the South. They point to your election and Stacey Abrams’ narrow defeat in neighboring Georgia as evidence of that change. Do you feel it and, if so, how can Democrats sustain and build on that momentum?

DJ: I do feel it. It’s not a dramatic about-face. I don’t think anybody should think that, but as people grow up in a different South to what I grew up in—not a segregated South, but one that is integrated and desegregated—you see more and more issues that were very divisive in the past are not there as much anymore.

JK: Now, we haven’t said Trump’s name, but he looms over all of these conversations about voting rights and human rights. As we’re talking, there’s reporting that the president is clearing out the Department of Homeland Security and some folks are fearing the appointment of harder-line people. What should happen at DHS? What’s your message to the president as he makes this decision?

DJ: Donald Trump is in an incredibly unique position on immigration that if he really wants to get something actually accomplished, he may be in the best position of anybody in years to do that. There’s a Democratic House that he’s got to contend with, but if he would just reach out to those Democrats, reach out to folks like me, there are a lot of things that can be done because so many people want secure borders. We have a different view on how to make sure those borders get secure sometimes, but at the end of the day, we are still for secure borders. If Trump puts a lot of hardliners in there, it’ll be very difficult for him to get through anything in this Congress, not just with Democrats. It’ll be tough getting even Republicans to support such a hard line on immigration.

JK: What should our listeners keep an eye on as we head into 2020? Any candidates you’re particularly excited about, maybe even one of your Senate colleagues?

DJ: I’m crazy about all of my Senate colleagues. They’re incredibly bright folks that have a lot to add to this upcoming primary season. My closest friend in this field of candidates has been someone I’ve known for 40 years. He’s not in there yet, but I expect him to be, and that’s former Vice President Joe Biden. Despite the issues that he’s faced, I still think he has the ability to reach people from all ends of the political spectrum and govern this country.

DJ: I love being a United States senator. I mean, it can get frustrating at times, it can get wacky at times. It is incredibly busy. But every day I am so honored to be here, to walk these halls, to walk on the floor. I started my career out of law school working for Sen. Howell Heflin on the Judiciary Committee and I have walked off the floor of the U.S. Senate as a staffer with him in 1980 and to walk back on in 2018 in his seat is just a remarkable journey and an honor for me, and I love every second of it.