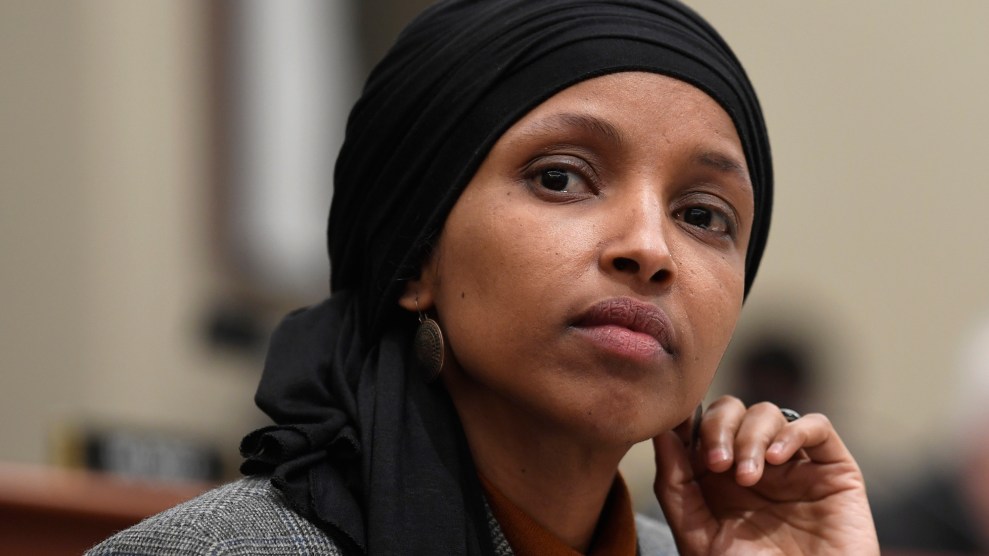 In March, about a week after a gunman stormed two mosques in New Zealand, killing dozens of Muslim worshipers, Rep. Ilhan Omar (D–Minn.) gave a speech at the banquet of a Muslim civil rights group in California. A short snippet of that speech—in which Omar referred to the 9/11 attacks as “some people did something”—went viral Friday after it was posted online in a video. Pundits accused her of trying to downplay the 2001 tragedy at the World Trade Center; and President Donald Trump tweeted a video of her sound bite juxtaposed with footage of the Twin Towers up in smoke, and retweeted a comment that asked, “How is this woman walking the halls of Congress.”

Anti-Muslim assaults are at record levels in the United States.

This backlash is an intentional distraction from Omar’s broader point. In the 20-minute speech at the Council on American-Islamic Relations banquet, the congresswoman urged Muslim Americans to stand up for their rights in the face of increasing harassment and threats to their safety since 9/11. “Far too long we have lived with the discomfort of being a second-class citizen, and frankly, I’m tired of it, and every single Muslim in this country should be tired of it,” she said in the speech. “CAIR was founded after 9/11 because they recognized that some people did something and that all of us were starting to lose access to our civil liberties.”

While Omar misspoke about CAIR’s history—the group was formed in 1994, though its membership jumped after 9/11—her argument that Muslim Americans have faced increasing suspicion is backed by plenty of evidence. Since 2001, Muslim Americans have increasingly dealt with Islamophobia and threats of violence against them. The two most recent FBI reports on hate crimes showed that anti-Muslim assaults are at record levels in the United States, hovering at three times higher than they did a decade ago. Just this week, an Ohio chapter of CAIR asked the FBI to investigate after it received a threatening letter praising the New Zealand attacks as something that brought “tremendous joy” and calling for “Death to Islam everywhere.” Other CAIR chapters have reportedly dealt with similar threats.

The overall number of recorded hate crimes against all groups has grown in recent years, but Muslims have been disproportionately targeted, as ABC News pointed out in a recent analysis:

In 2007, the FBI recorded 33 anti-Muslims assaults. In 2017, the FBI recorded 105 such assaults, and another 168 incidents targeting Muslims for practicing their religion…Anti-Muslim assaults account for a small fraction of hate-based assaults reported to police each year, but Muslims overall account for an even smaller fraction of the total U.S. population, as reflected in findings from the FBI and Gallup Organization. Accordingly, Muslims are three times more likely to be assaulted for their religion than Jews, who themselves have increasingly become targets in recent years, peaking at 100 anti-Semitic assaults in 2015. Hate-inspired assaults also victimize Muslims at a rate twice as high as African-Americans, who suffer several hundred targeted assaults each year, an ABC News review of the FBI’s 2017 statistics found.

The situation appears to be getting worse under Trump. His administration has pushed for a ban on Muslim travelers to the United States and continues to use fearmongering language about Islamic terrorism (even though right-wing extremists, and especially white supremacists, are responsible for most domestic terrorism attacks). About half of Americans say Islam is not part of “mainstream American society,” according to a recent Pew poll, and that view is much more common among Republicans and white evangelicals. Another Pew poll found that Muslim Americans self-reported an increase of incidents where they were “treated with suspicion”—32 percent of respondents said it had happened at least once over the prior year, compared with 28 percent in 2011.

Omar herself has faced death threats. In New York, a man was recently arrested and charged with threatening to assault and murder the freshman congresswoman. “Do you work for the Muslim Brotherhood?” the man allegedly said to one of her staffers when he called their office, according to a press release from the US Attorney’s Office in the Western District of New York. “Why are you working for her, she’s a (expletive) terrorist. I’ll put a bullet in her (expletive) skull.”

In the ABC analysis, former counterterrorism officials who worked for both Democratic and Republican administrations blamed the uptick in anti-Muslim hate crimes in part on the rise of social media, and on comments by politicians. The fearmongering tweets Trump and others pushed out in the wake of Omar’s speech serve as yet more pieces of fuel for this fire.